We headed out this morning fearing the worst of traffic.  And, for a few miles, it was pretty bad.  We rode on the dirt paths paralleling the road in order to avoid the trucks.  The going was slow.  Then, about 15 miles from San Quintin, the traffic disappeared!  Even though we were fighting a headwind, we were elated.
The road for this first part took us on the relatively flat coastal plan.  We could see waves rolling in far offshore, and we briefly contemplated going out to the beach.  Maybe tomorrow.  Too cold.  We stopped for a moment at the top of a small hill to take in the scenery.  A fence led a few hundred yards down to the ocean, but apart from that and the ribbon of road, we could see no sign of humans.  Only sand, desert, and some plants here and there.
We had taken but two pedals on the road after our break when we heard a loud BANG! and Tam found herself with a flat tire.  But not just any old flat: the metal rim had blown out!  And just at that moment, it began to rain.  We took stock of the situation: an unrideable and unfixable wheel meant we had to hitchhike.  Fortunately we didn't wait long and got a ride to the next town, El Rosario, about 20 miles away, where we found a cheap hotel (200 pesos = $14.39), and set about finding a new wheel.  We'll probably be here for the next few days figuring things out. 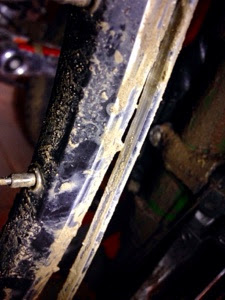