Things Have a Way of Working Out

Yesterday afternoon, a bit shocked from the explosion of my wheel, I started doing everything I could to figure out how to get a new one. First I contacted my parents, who were amazing and immediately jumped the the rescue, contacting shops and evaluating the options of sending something from the US. Then I sent e-mails to bike enthusiasts in Baja via warmshowers asking if they could help. A bunch of good leads turned up but most promising was Salvador from Fass Bikes, just north of here in Vicente Guerrero. Immediately upon seeing my e-mail he contacted a shop in Tijuana and had a wheel on its way. Can't beat that service!


This morning Danny and I rode the local public transport system a couple hours north. This meant that we sat on a crowded white coach bus and watched Frozen in Spanish. In case you are wondering, "let it go" was changed to "libre soy" (I'm free) in Spanish and is just as catchy.

Once in Vicente Guerrero we did some chores (grocery shopping, bank, etc.) and I tried my first ever fish taco for lunch in an effort to adapt my stomach to some of the meat I may need to eat as we head south. It was quite good- deep fried fish smothered in key lime, onions, and flavorful salsa can't really go wrong.
Most importantly we met Salvador, who spoke amazing English and had acquired the perfect wheel for me. He is a fantastic guy all about helping cyclists in any way he can. 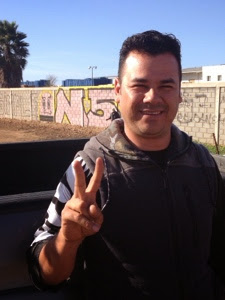 Also thanks to our new friend we got a ride back to El Rosario where we had left our bikes at a hotel. Not just an ordinary ride- we were in an 18 wheeler going to pick up tomatoes from a farm down south. Never imagined we'd be in the front cab of one of these! 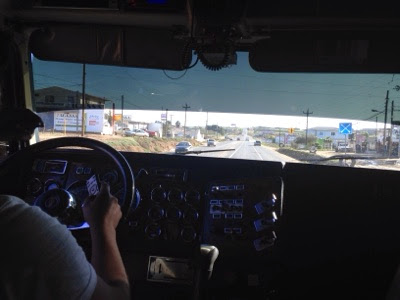 View from our truck.

We arrived before the sun had even set and I had enough time to finish my book before getting ready for tomorrow.
Thanks again to everyone who helped us out today! I can hardly believe that a busted rim in B.C. Mexico only delayed us by a day.
Posted by Danny at 7:40 PM