We set off from Guerrero Negro early, trying to make it as close as we could to San Ignacio, a true desert oasis, where we would spend Christmas Day.  The riding started off well with a tailwind!  I put an exclamation point there because tailwinds are just so exciting for us, especially on this ride: 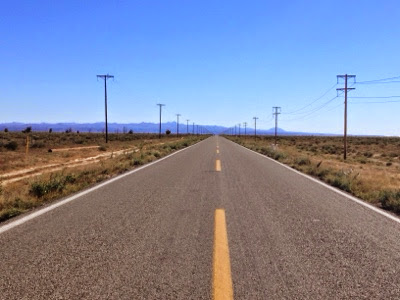 Not much to entertain the eyes.  Getting through the desert as fast as possible was the name of the game.  We did see a crested caracara, a large, eagle-like bird native to the Baja, but apart from that, it was pretty boring.  45 miles later, and a whole lot closer to those mountains in the distance in the picture, we reached the town of Vizcaino.  The tailwind was still blasting, and the hope of reaching San Ignacio that day entered our minds.  Maybe, just maybe, if the tailwind stayed with us.

The tailwind did stay with us - for about twenty more miles.  Then the wind changed completely, and we found ourselves biking into the wind, yet, by this time, motivated to make it to San Ignacio.  The sun started to set... My odometer said 79 miles... It must be over the next hill!  But it wasn't there, and we kept going.  And going, and going, and going, until it was almost dark.  Finally, about 7 miles after where it should have been according to our map, we saw a town in the distance.  San Ignacio!  We stayed at the first hotel we came to, a spacious and quiet place called Rice and Beans. 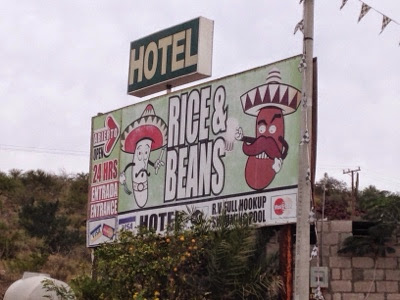 The next morning, Christmas morning, we rode a few miles into the town of San Ignacio.  Amidst the swaying palms is the town plaza, at the head of which is the old mission, a grand and wonderfully preserved building. 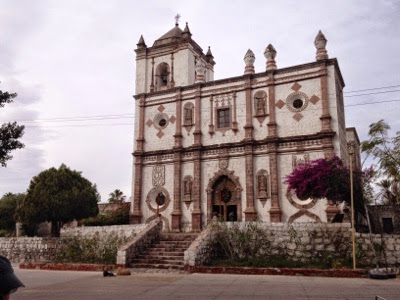 Next to the plaza is a place called Casa Leree, which houses a bookstore and a comprehensive history of the area and its surroundings.  Until recently it was also a nice bed and breakfast.  The proprietor, historian, and former innkeeper is a soft-spoken lady originally from San Francisco named Juanita, who moved down here a number of years ago.  We weren't sure if her place was open for Christmas Day (it's also her home), but she welcomed us right in and showed us around.  Within a few minutes, she had invited us to her dinner that night, as well as to stay at her place that night!  People are wonderful. 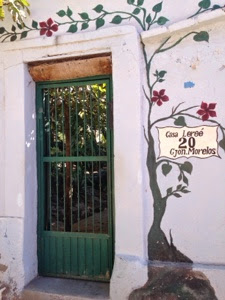 The Entrance to Casa Leree 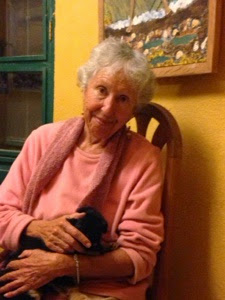 Juanita has two incredibly cute puppies.  And, recently, a canyon wren has moved in and built a nest on a support beam in the old barn, which is now the living room.  The house and yard are open and colorful, surrounded by shade trees and upbeat music from the neighboring houses.  It is a place of peace, an oasis within the oasis.  We are so fortunate to have been able to spend the day there.

After wandering around the town, cooking food for the dinner, and painting/birdwatching at the river, we headed to dinner at Tootsie's, a local restaurant owned by a Canadian couple. The entire English-speaking community of San Ignacio was there, along with a few guests like us, for a total of maybe 25 people.  We brought some salad and quinoa stir fry and enjoyed all the delicious dishes prepared by other guests and by the owners of Tootsie's.  We also met a bunch of fantastic people and had a great time in general.  What a wonderful day in San Ignacio!