It was sad to say goodbye to the wonderful oasis we discovered at Casa Leree, but we were also excited to reach some warm ocean water. Late morning we said goodbye to Juanita and her wonderful family of dogs. Juanita, we can't thank you enough for everything! 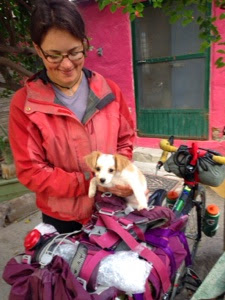 The puppy could ride here and I wouldn't even notice!

Our road soon brought us to a wide desert valley in the shadow of Volcan tres virgines, a volcano so large that its top was shielded in clouds. 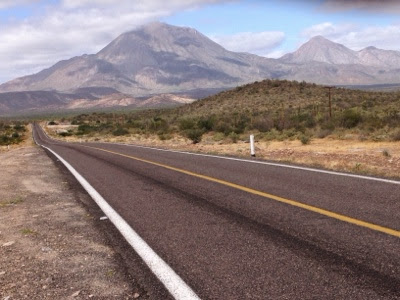 The volcanic landscape provided for interesting scenery as we began a spectacular winding desent down into another large desert plain. Here, the clouds dissipated somewhat and a tailwind picked up! What luck we've had with winds recently!
In no time at all we had a beautiful view of the Sea of Cortez far below. Thus began the steepest descent of my life. Whoever built this road forgot that there's a lot of truck traffic. We didn't measure but the grades were easily over 20%.
Our welcome to the ocean was not as picturesque as you might imagine. The road became rutted and filled with huge potholes. We passed the dump and then the large copper mine, which is the main reason why the town of Santa Rosalia exists. Once in town we admired the church designed entirely out of steel by the same architect who created the Eiffel Tower of France, enjoyed some bread from a famous local bakery, and met two cyclists from Austria also biking from Alaska to Argentina!
Looking forward to sandy beaches tomorrow.
- Tamara
Posted by Danny at 8:52 PM