The alarm rudely disturbed us early this morning, as usual, and we got on the road shortly after.  The road through Laguna Beach was hilly, the slopes surrounding us dotted with huge mansions.  This was city riding; we shared the road with a lot of cars, each stopping at every light then accelerating past us again.  Fortunately the city only lasted a few miles, then it was on to the next: Dana Point.  We got a little lost with all the back roads and misleading bike route signs, but a nice guy named Dave directed us.  He was riding a bike with bamboo tubes!  We were astonished at this piece of engineering and asked him all about it. 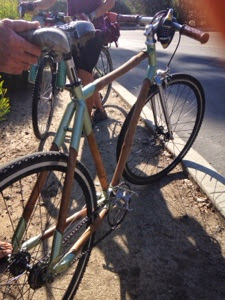 South of the next town, San Clemente, we got on to some deserted back roads and bike paths and passed the San Onofre Nuclear Generating Station.  The massive, grey domes were visible for miles.  Soon after, we stopped for lunch, but not for long.  We hoped to make it to San Diego: 50 more miles.

The riding along the next section was great!  Bike paths and lonely roads led us up to Camp Pendleton, a Marines base, and going through the base, though on more highly trafficked roads, was a breeze.  A friendly soldier at the front gate checked our IDs and gave us directions, most importantly where not to go. 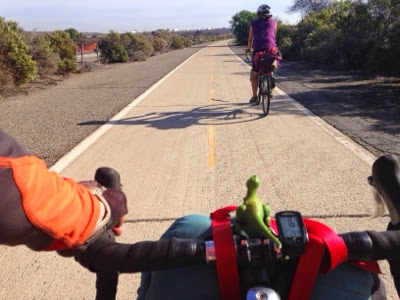 We came across a bike shop, Alan's Bikes, in Oceanside and stopped in.  No shops yet, and we had visited a few, had had cantilever brakes and spare pads, but this store did!  Tam changed out both of her bothersome and annoying brakes to simple and inexpensive cantis: no more frequent adjustments!  Unfortunately this took longer than we thought, and when we left it was already getting dark.  I am truly looking forward to the winter solstice and then more hours of sunlight.
The darkness nixed our plan of getting to San Diego, so we stayed a bit and chatted with Brian, Marcy, and Jimmy, all of whom worked at the shop.  Their helpfulness and company made the otherwise menial task of changing brakes a fun and enjoyable one.  Then on the road again.  We are stealth camping tonight on a bluff overlooking the ocean in Carlsbad.
Posted by Danny at 8:25 PM