After a delightful breakfast of blueberry and chocolate chip pancakes we sadly said goodbye and set off down the road. Thanks, Emily and Madison, for everything! It was so wonderful to see you two and, of course, meet the cats!
Our first few miles were on the Santa Ana River Trail, the same trail we were on yesterday. 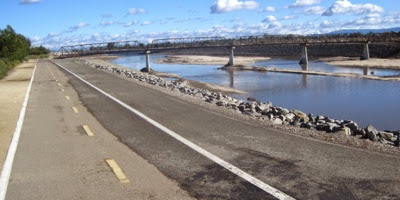 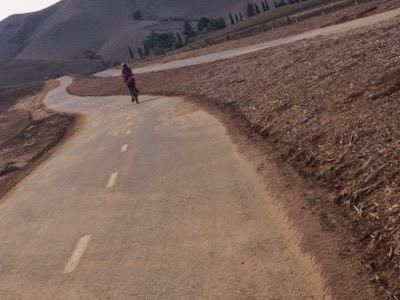 This trail leads almost all the way from the mountains to the ocean except for a short 10 mile section. We knew that this section was approaching and figured that we would find a way to take surface roads instead when we got there. Lucky for us, two friendly cyclists stopped and gave us directions.
Once off the bike path we discovered a town I would have never expected to find in Southern California. Instead of sidewalks were miles of wide dirt trails being used by people of all ages on horseback. We even saw a lady with a carriage being drawn by a tiny pony. All the stores  in town were designed in old western style and were, of course, equestrian friendly. 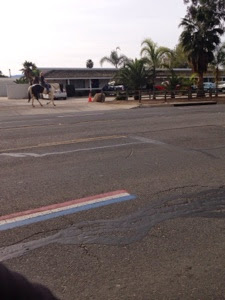 Lady riding a horse. Yes the street markings in this town were red white and blue. 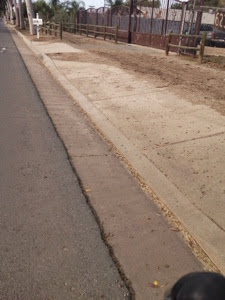 The horse trail- no parking!
Soon after the horse trails ended, we picked up the bike path again and stopped for lunch in a cute, grassy park. After a bit of a break, it was time to head to the beach! 15 miles or so away from the ocean we met Don, a friendly cyclist who is trying to complete 100 century rides this year. He has already ridden 17,000 miles. More than we will probably ride in the next year! We rode with him all the way to the beach and he told us about some of the local places and the Thai restaurant he used to own. Thanks for a fun ride today, Don. 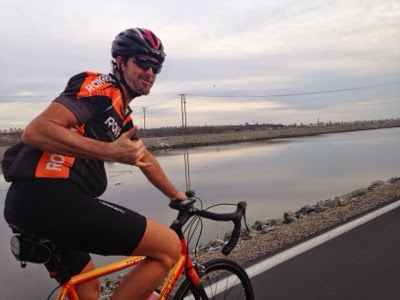 Our new friend Don
Once at the beach, Don turned back and we rode south along the coast, immediately leaving the sand and being surrounded by the strip malls and bustling bars and restaurants of Newport Beach. When we finally saw the ocean again, it was just in time to enjoy a spectacular sunset of red streaked clouds. We set up camp in the midst of some coastal sagebrush. 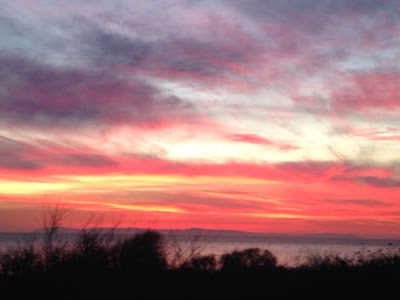 Can't beat the smoggy sunsets of So Cal
- Tamara
Posted by Danny at 8:09 PM