We found our own magic bus.  After 60 or so uneventful miles, we wound up in Slana, a mile or so in on the Nabesna Road, one of two roads that leads into Wrangell-St. Elias (the McCarthy Road is the other).  There wasn't much there, and on our way back out to the main road, a man in an approaching car waved for us to stop.  "Y'all have somewhere to stay tonight?"  Hesitating, as this is not a question we hear every day, we responded that no, we didn't really know, but right now we were headed to the market just up the road.  "I own that place," he said, "and we have a little place for cyclists to stay.  Come on over; I'll be back in a minute."  He drove off.  As I mentioned yesterday, we must be the luckiest people in the world.  Right before he drove up, I had been kicking myself for not looking up on the interwebs where the store was in Slana; maybe we could have saved ourselves a couple of miles.  Of course, then we wouldn't have met Jay.  Those extra few miles are always worth it.
Jay Capps is a true Alaskan.  He hunts, smokes, fishes, does everything himself, and has a nice streak a mile long.  We haven't met his wife Debbie yet, but he says she's even meaner than he is.  After we walked in, Jay showed us to the bus. 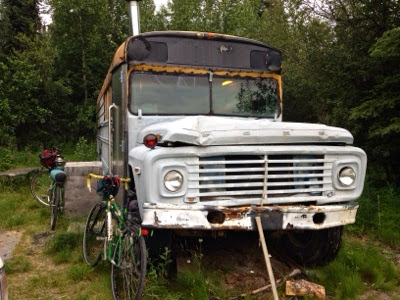 I was expecting a leaky contraption with a rough floor, but this was no ordinary bus.  Four beds, a microwave, a toaster, a coffeemaker, pots and pans, a propane stove, a wood stove with hatchet and maul, a table with a booth, and various food items and whatnot that past residents have left.  Jay has even covered the sides with thick metal and replaced the door with a bearproof one.  "Do these work?" I asked Jay, pointing to the lights.  He looked insulted.  "This is Midway [the name of the store]," he said proudly.  "Everything works."  And indeed it does.
Residents of the bus are encouraged to write something.  The numerous notes and drawings on the walls and ceiling add an incredible amount of character and warmth to what might otherwise just be a bus.  Many of the notes are from cyclists who were/are in the midst of their own Alaska-Argentina trip.  Tam added some artwork to the wall above the "kitchen" table: 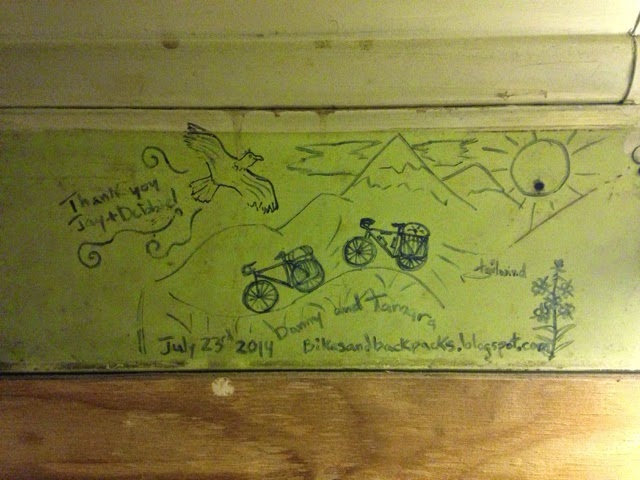 Check out these pages from other cyclists who have stayed here:

Jay also gave us free reign of the inside bathroom, shower, and expansive store, "Just write down what items you take, and we'll figure out money tomorrow."  He also pointed out that, because he was leaving the back door open for us, we could rob him blind, but that doesn't seem to bother him.  "We go off the honor system," he says.
Tam and I took showers then cooked up a delicious amalgamation of pasta, garlic, and the remaining veggies we had from Kennecott.  Mmm!  Then we made some chocolate chip pancakes.  Having a kitchen is great! 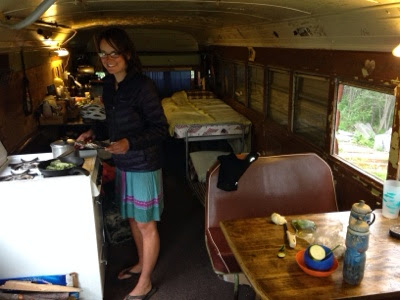