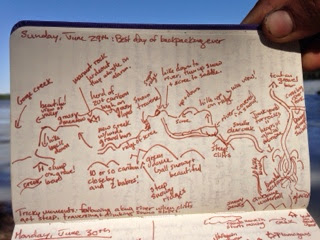 Above is Tam's interpretation of this day.  We were hiking south and then west, so her drawing starts at our tent in the upper right.  Try and follow my writing with her drawing!

Having crossed a fork of the Toklat yesterday, we started our day following the main Toklat south for a few miles.  I almost fell while crossing a deep section of a branch; it wasn't that deep, really, no more than mid-thigh, but I couldn't seem to find stable footing on the river bed, which was obscured by the heavy load of mud, silt, and debris this flooded river was carrying.  I made it okay to the other bank and looked back at Tam, who shook her head at me and began walking, finding a shallow, braided section about a quarter mile upriver.  Chilled to the bone from the glacial water, my next hour, spent walking fast and wearing many layers in an attempt to warm up, taught me the important lesson that it is always worth it to spend the time searching for the best possible place to cross. 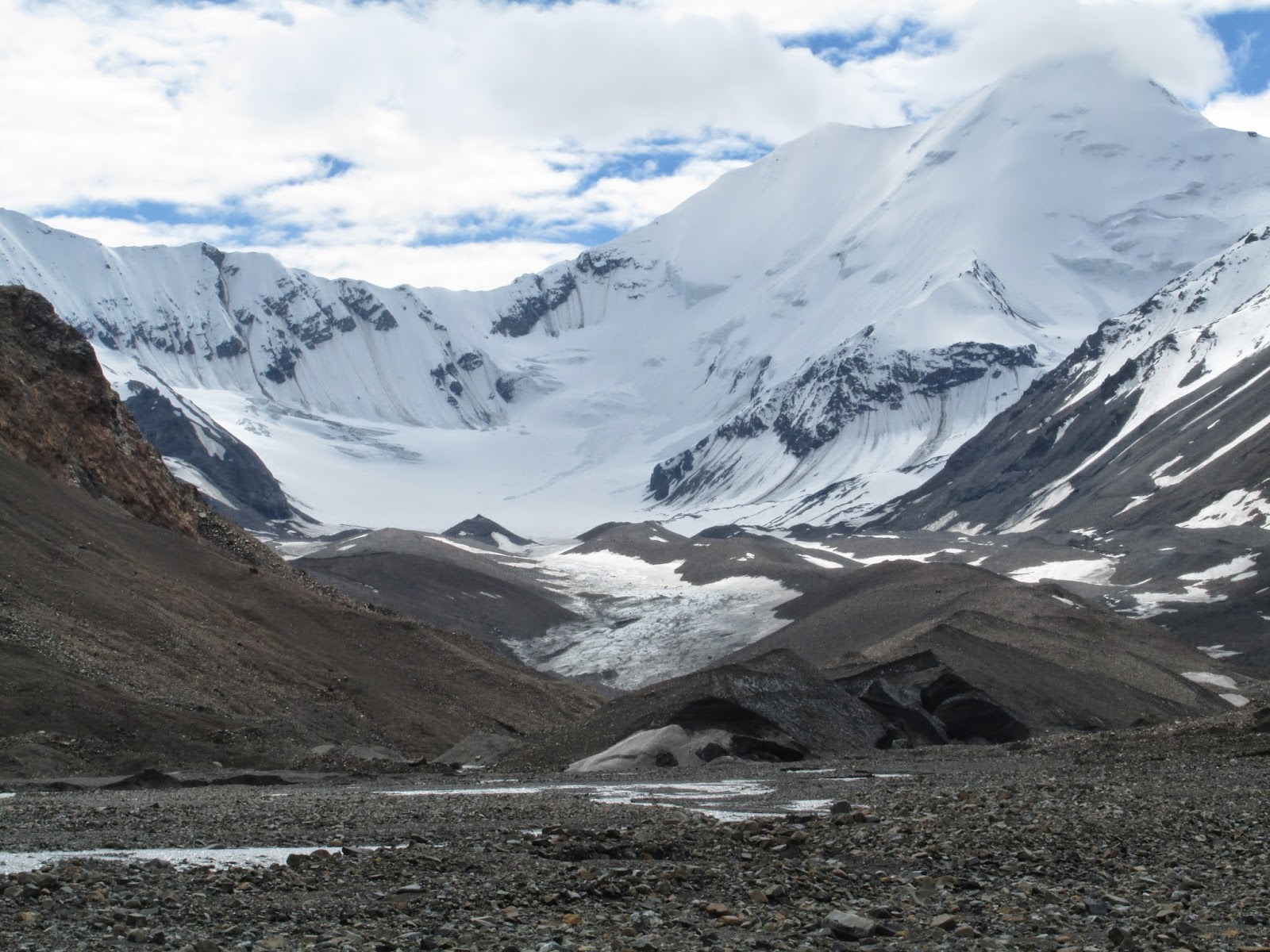 We continued walking up the main branch of the river, overshooting our drainage by about half a mile so we could find a nice braided section to cross this big river.  This extra foray provided great views of a waterfall hundreds of feet high, as well as a glimpse of the once-great glacier that had created this whole valley in which we were hiking.  Our maps, made in the 1970s, indicated that the glacier had receded about four miles since then.  Even without the maps, the heaps of moraine on either side of the river indicated the formidable mass of this ice river.  We chose to hike on the moraine for a short while, and though treacherous due to the loose rock on every step, its beauty surpassed the risk.  Within this "junkyard" (so associated by us because it appeared, with its heaps of rock, to be a dump), we found rocks of every shape and size, undercut and striated and divided with minerals of every hue.  Geology usually makes me yawn, but here it was a painter's palette, rough art underfoot.

After a tasty lunch of hummus and hazelnut butter on tortillas, we followed our drainage of choice up the hill.  Hitting deep snow overlaying the creek at around 4,000 feet, we cut up to the ridge.  Unfortunately, and as is the case with most Denali ridges next to rivers, this ridge was interrupted frequently by steep drainages running downhill to meet up with the larger waterway.  We descended back to the main river (creek might be more accurate for Alaska) on some steep scree then were able to sidehill past the snow up to the pass between Green Dome and Gravel Mountain.  Large cornices, areas of overhanging, windblown snow, covered the top of the ridge, so we were dubious while ascending about being able to go down the steeper slope on the other side.  Fortunately, we found a scree walkway that allowed us to skirt most of the snow, and the fresh snowmelt was delicious!
This was drinking from the source at its best, high in the Alaska Range on an unnamed ridge.  We followed another creek down, a tributary of Gorge Creek.  "Creek" really isn't the correct term; in the states these "creeks" would be mighty rivers, but, as Mardy Murie writes, Alaska is a land of many mighty rivers.  Hence, creek.  We saw large herds of caribou on the slopes above us, and marmots whistled at us as we intruded on their grassy meadows.  We found a gravel bar deep in a gorge and went to bed just as rain started to fall.  An incredible day.  I feel that I have graduated to the "advanced backpacking" class: route finding, river crossings, steep ascent of scree and snow slopes, intense and sustained physical exertion.  Denali is hiking at its finest.