Anchorage was great, but we were itching to get on the road again. Here are some highlights, good and bad, from our time there:

- We stayed with some wonderful people: our new friends Jeff and Sarah, who generously shared their lives with us, and Tam's friend from college, also named Sarah.  Sarah and her roommates were incredibly accommodating, and we can't thank them enough for opening their doors to us.

- Tam got sick.  She had some kind of bug or was maybe just really exhausted.  Whatever it was, we stayed an extra day for her to recuperate.

- We made pancakes.  Twice.  There's not really much more to this, but they were soooo good!  Having access to a kitchen was a rare treat. 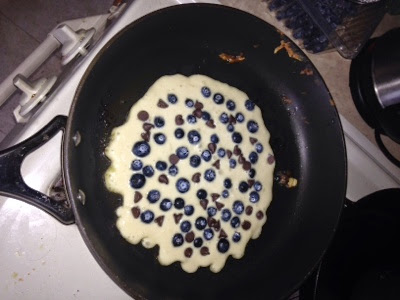 Blueberry and chocolate chip awesome-ness, almost ready to be flipped

- Adventures!  We explored the Chugach Mountains on a two hour run with Sarah and her friend Julie, who are both training for a 50-mile race.  Our early morning run took us through a spectacular valley bordered by snow-dappled peaks, and gave us beautiful views of downtown Anchorage on the edge of a misty ocean.  The joy and beauty of the run was long outlasted by the full body soreness endured afterwards. Running and biking do not use the same muscles.
We also went canoeing with Sarah and her friend Diana on the glacial-fed Eagle River.  Fortunately we capsized before the Class III section and swam safely to shore, then we hiked back to the road, leaving the canoe to rescue the next day.  Exciting!

- We were able to finish a bunch of errands and projects, including things like my buying new rain pants (my old ones grew legs and walked away when we were in Fairbanks) and Tam sewing a new zipper onto one of her bags. 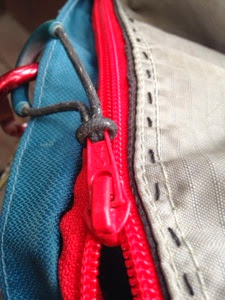 The road out of Anchorage was more pleasant than we had anticipated, for the city is rife with bike paths.  We made it to Eagle River yesterday, incidentally to the campground where we would have taken our canoes out had we made it there.  On the way to the campground, we saw Manu and Katrien, the couple from Belgium who had helped Tam fix her bike weeks ago!  They were coming into the city after spending a bunch of time in Fairbanks and Denali, and it was great to see them and hear about their adventures.

Today, we headed north on the Glenn Highway then branched east to Palmer.  The shoulder's a bit thin at times, which makes for some sketchy riding, but overall it's not too bad. 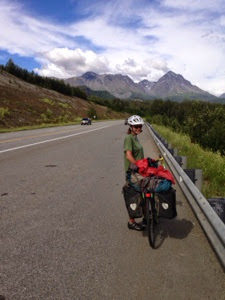 Tam at a pullout on the Glenn Highway

The area we're in now, the Matanuska Valley, is known for its moderate weather and fertile soil.  We couldn't have asked for better weather today: mid 70s, partly cloudy... it's hard to believe we're still in Alaska!  Tonight we're camped at a campground right next to the large, silty Matanuska River.  We scored a covered pavilion all to ourselves.  I hope it rains while we're here, just so we can sit at the picnic table, dry and warm, and listen to it patter on the plexiglass roof. 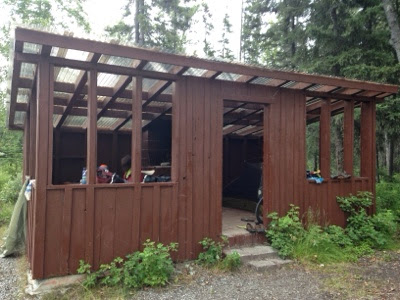