The market in Huehuetenango is absolutely crazy.  There are shops on top of shops on both sides of the street, loud music and audio advertising, and people walking around selling random things.  One lady was advertising rat and ant poison, then she switched a few minutes later to marijuana for back and bone pain.  Go figure.  The markets in Mexico are usually inside a big designated building or warehouse, but here it was all happening with traffic going by on this narrow, one-way street.  At one point a truck decided to go through, the mirrors hitting every vendor's umbrellas on both sides.  We bought a few things and left the craziness as fast as we could.

We spent part of the morning debating whether to go west or south, to the remote highlands or the more popular highlands.  Everywhere except the coast, we're learning, is highlands in Guatemala.  We decided to take the road more traveled, the Pan-American Highway.  Robert Frost might be disappointed, but the popular places are known for a reason, not to mention the security risks we had heard about remote Guatemalan roads.

The day's ride started with some rolling hills, then it turned all uphill.  Over the course of 50 kilometers we climbed from about 6,000 to over 9,000 feet, the wide valley where Huehuetenango is located falling farther and farther below, and the mountain range on the other side of the valley, the Cuchumatanes, poking its ridges through the clouds. 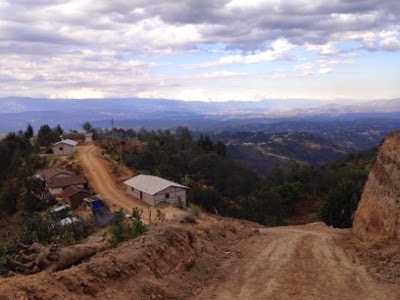 A side road overlooking the valley

The bus drivers here drive like they're late for their own wedding, but we had a decent shoulder for most of the day, so no problem. 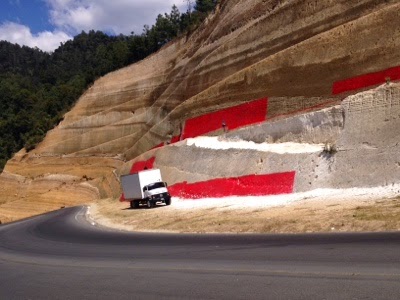 A common sight: political advertisements being painted on the side of the road.  We saw about a million of these red strips with white text promoting the Lider party.

Around 6 pm we reached the top of the climb and descended briefly into a little village.  On the outskirts we asked a guy if we could pitch a tent behind his business, and he said he couldn't give permission because the owner wasn't there but we should go ask at the next house; his sister lives there.  The sister said she also couldn't give permission because her husband wasn't around, but she waved her brother over, he gave the okay, and they (by this time the whole family was outside) showed us a spot to put our tent.  It was odd to us that the word of this woman's brother would supersede hers, as he didn't even live there.  Clearly there's not much gender equality in this area, doubtfully anywhere in rural Guatemala.

The house was a group of buildings next to the road surrounding a big open-air garage.  The whole family lived there, from the little kids to the oldest great-grandparents.  The kids were painfully shy at first, and the adults not much more open.  They were all descendants of the Quiche Maya (key-CHE), and while we had heard that some indigenous groups shun gringos because they believe that they come to Guatemala to steal children, we were pretty sure that wasn't the case.  They were just shy, not used to people they didn't know.  After we showed some pictures of our families and shared about our lives and our country, they began to open up, even teaching us a few words in their native language.  The older folks didn't speak much Spanish, some none, but we were able to communicate with everyone else.  Good thing, too, because everyone stood around us while we made dinner, a rather awkward state of affairs, but we tried to keep conversation going.

After, the mom of the house, Elamira, invited us to check out her kitchen.  She poured us some small glasses of the tea she was making and brought out the dough for tortillas.  There was already a fire going in the stove.  She deftly slapped some dough into a perfectly round, flat circle, placed it on the stove, then showed us how to do it; it was much harder than it looked!  The corn being planted, sown, reaped, husked, ground, mixed into dough, and now shaped and cooked all by hand right there, made for the most delicious tortillas there could possibly be.  She later gave us a bag to take with us.

The next morning we woke up to frost on the ground.  Elamira's mom, who didn't speak much Spanish (and us no Quiche, obviously), made us some steaming hot plantain tea, which we enjoyed while Elamira made some more tortillas.  Then she introduced us to the family's pigs, wolves (they breed huskies), sheep, and chickens and talked to us about what they use all the animals for.  Not surprisingly, they make many of their own clothes starting from the very beginning: shearing the sheep.

To give what little thanks we could for this family's generosity, Tam gave them one of her paintings and our contact info.  Hopefully the kids will come visit us someday in the U.S!  For obvious reasons, I didn't want to take out our expensive smartphone, so unfortunately I don't have any photos to post here.

In the next town, I asked a gas station attendant if there was anywhere nearby to buy cheese, fruit, and veggies, and she said she didn't know about fruits or veggies, but (she pointed to a guy walking by), "that guy sells cheese."  I bought two blocks of cheese wrapped in corn husks straight out of a bucket in the trunk of his car, and they were absolutely fantastic.

We then started our daily climb, this time up to over 10,000 feet, the highest elevation of our trip thus far.  All around were patchworked fields, each separated by a small row of vegetation so that, in the larger areas where the forest had been cleared, the hillsides appeared to be draped in giant quilts. 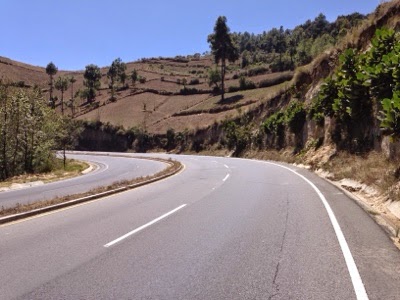 Walking frequently on the sides of the road were indigenous men and women carrying what looked to be very heavy loads of wood, usually on their backs with a strap over their forehead.  Sometimes the women were balancing a load on their head with a child in their arms or on their back.  Always they, the women, wear the most beautiful, colorful clothing, undoubtedly all hand-woven.  The men seem to have adopted the easygoing style of jeans and a t-shirt, at least the younger men.  We've seen numerous shops advertising American clothing, so maybe they're just being trendy. 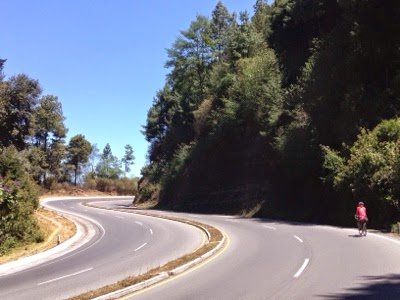 Up at the top of the pass, the view was incredible: a row of volcanoes, low-hanging clouds shrouding and accentuating the peaks, more quilted hillsides.  We wanted to stay longer, but deforestation and wind meant blowing dust and stinging eyes.  The descent was quick, exhilarating, and, I believe, well-deserved.

A few hours, some tortillas, and a licuado (blended fruit juice) later, we reached the turnoff to Panajachel.  The road turned super steep downhill; we had to stop numerous times to let our rims cool off and our hands uncramp from squeezing the brakes so tightly.  Never before have I wished so much for disc brakes. 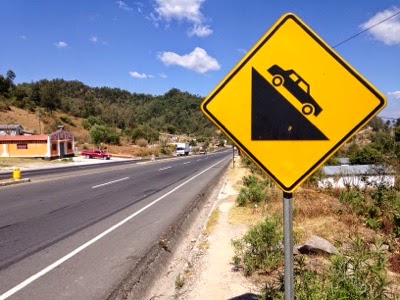 In Solola we got our first glimpse of Lake Atitlán below, and while the day was hazy and the air thick, the view was still amazing.  I could tell why this is such a famous destination.  A few more hand-cramping minutes later, we entered Panajachel, a touristy town right on the lake.  It took us awhile to find a decent place, but we finally found a relatively cheap, family-run hospedaje, went out and got some groceries, and settled in for the night. 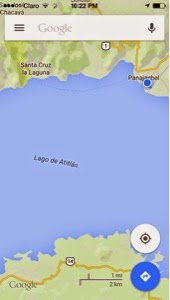 Northeast side of the lake 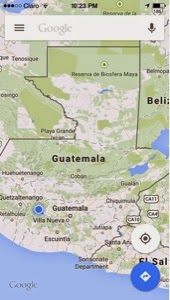 Email ThisBlogThis!Share to TwitterShare to FacebookShare to Pinterest
Labels: Guatemala