Before leaving our hostel in Granada, we jumped in the pool with our clothes on.  Always easier to beat the heat when you're already wet!  The coolness didn't last long though; by mid morning the heat was going full blast but was minimized, fortunately, by the strong winds.  Whenever the land narrows, it seems winds get strong.  The same thing happened at the Isthmus of Tehuantepec, aka the skinny part of Mexico.  So progress was slow, and we made it to Rivas, then the port of San Jorge in the early afternoon, just in time for the 3:30 boat to the Isla de Ometepe! 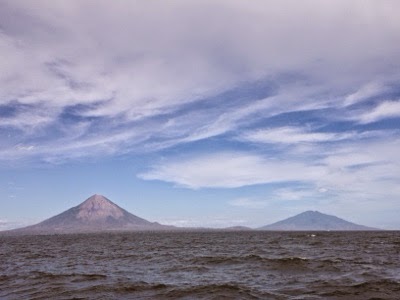 All morning the Volcán Concepción had been looking over our shoulder.  It forms half of the Isla de Ometepe, the big island in huge Lake Nicaragua, the other half belonging to Volcán Maderas and the two being joined by a narrow strip of land.  Though Maderas is extinct, Volcán Concepción is still active, and recent lava flows can clearly be seen on its picture-perfect conical slopes.  Our ferry pushed through the wind-whipped lake to Moyogalpa, on the west side of the island, and, as the sun would set soon, we quickly biked out of town to Finca Samaria, a farm some friends recommended for camping.  We spent a quiet night on the beach, lulled to sleep by the soft waves. 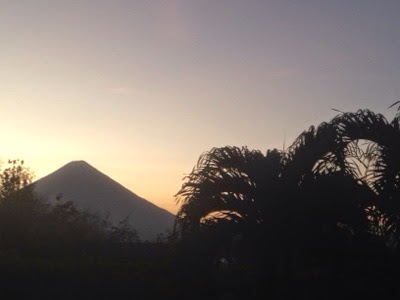 The owners of the farm were really nice, and talking with them provided an interesting start to our day.  I wanted to hear especially what they thought of the new canal already under construction through Nicaragua.  It would severely hurt the ecology of the lake, not to mention the noise and sight pollution of huge tankers chugging by, so not surprisingly, our new friends were adamantly against the canal.  Hopefully Nicaragua's rights and future were and continue to be considered in the planning and undertaking of this project.
Our first stop of the day was at Reserva Charco Verde, a forest and lagoon with some short hiking trails.  We didn't see many birds, just a lot of jays, but that was okay because there were MONKEYS!  We had a great time gawking at their agility in the trees and how they use that wonderful prehensile tail as a fifth limb. 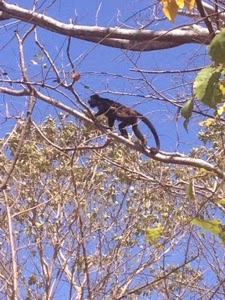 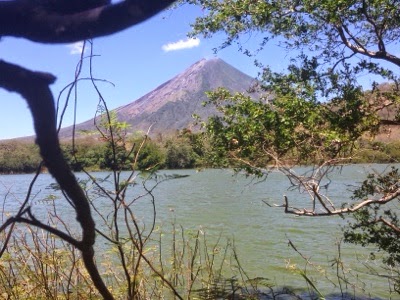 Reserva Charco Verde
A few more kilometers down the road took us to the Volcán Maderas side of the island, the east side, where we set up at another farm, Finca Magdalena, on the slopes of the volcano.  At the restaurant we ordered big plates of plain rice and added our own veggies, beans, and some seasonings! Then an early bedtime for an early start in the morning.
True to our plan, we got up early.  But instead of packing the bikes, we put on our hiking clothes and started to climb the volcano!  The forest on the lower slopes was dry, and we saw tons of yellow-naped parrots and more monkeys, including a new kind: the white-faced capuchin.  Up higher the forest turned humid, and even higher we hit the clouds and the according cloud forest.  By the top the trail was muddy, the air cool and windy, and the surrounding forest incredibly dense.  No more could we see any birds, just the trees and vines immediately around us, until the path opened up to an overlook.  Down below us in the volcano's crater was a brownish lagoon, which stretched to the far side where, above, loomed the summit. 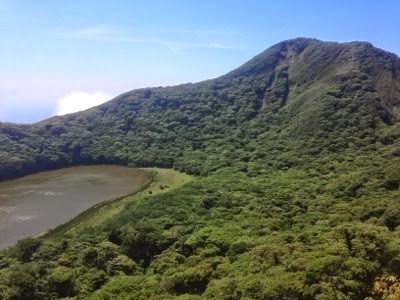 The canopy was so thick that it looked as if we could walk on the leaves like a broad, green floor.  I think the trail continues to the summit, but we were happy just watching the clouds roll in and change shapes under the influence of the strong winds.
After the descent, almost 30 km of riding took us back to Finca Samaria, where we enjoyed a massive dinner and an early bedtime.
Although the ferry back to the mainland was not running at the time we had hoped, and once we got started the wind was a strong headwind, after a few hours we made it to the border with Costa Rica! 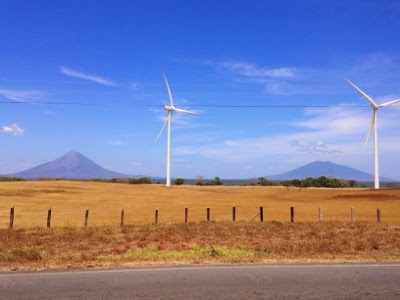 Leaving Nicaragua was the hardest part of any border crossing yet, and Costa Rica was super easy; if anything, we had hoped for a longer wait entering Costa Rica because the office was air conditioned!
After the border, we didn't quite make it to the first town and asked a family to camp in their backyard.  They acquiesced, no problem, and as we were preparing dinner, we heard a buzzing sound from above.  We both looked up for a moment then resumed our activities, probably just normal sounds of the forest at dusk.  Unfortunately, a moment later, a bee flew into Tam's hair, and she started freaking out.  I got up to try and help her but quickly realized there were bees around me, too, and we ran together up a little hill and out to the road, where the family whose house we were camping behind helped pull the bees out of Tam's hair and make sure there were no more.  We both got stung a few times, but no harm done.  We still have no idea why they attacked us.  Later, as we were moving our stuff to a new spot, a troupe of monkeys swung by in the trees above.  So wonderful that these people have monkeys in their backyard!  Can you imagine eating dinner on your back deck and watching monkeys swinging around?!
Cooking and eating was moved to inside the tent, and we enjoyed a huge dinner of noodles, beans, veggies, and cheese, followed up by some PB&J sandwiches and an interesting Stuff You Should Know podcast on homeschooling.  Then, as we were about to leave the tent to brush our teeth, I noticed that the ground outside was covered with ants.  The sides, too, was swarming with them.  Not swarming, actually, because that implies disarray.  The ants had come out as darkness fell and were clearly following a line, a thoroughfare in the middle of which we had, unfortunately, put our tent!  Being resourceful creatures, they had found a way around the blockade: through our stuff.  We figured we would deal with that in the morning.  The wilds of Costa Rica, bees, monkeys, and ants, greeted us with the biggest welcome they could muster, and, while all of that interests me quite a bit, I was happy to have some mesh in between myself and them while sleeping.
In the morning the ants were gone, but looking at the grass, I could see where the millions of tiny steps every night had worn a path.  Next time we'll look for that.  Some rain kept the morning ride cool, and we arrived soon in the small town of La Cruz, where we found an ATM to take out some colones, the local currency.  One problem: we had no idea what the exchange rate was!  It wasn't in our guidebook, and we had no way of getting internet.  The middle option of the displayed amounts should be a good bet.  We were estimating it to be somewhere in the hundreds, like the other Central American currencies, so you can imagine my shock when Tam came out and showed me a 10,000 colon bill!  It turned out to be the equivalent of roughly $20, so we weren't quite as rich as I originally thought.
A few more kilometers brought us to Parque Nacional Santa Rosa, where we paid $15 each (!) to get in.  Each subsequent day would be another $15 each, plus the nightly price of a campsite.  If we want to have any money left over for the rest of our trip, we won't be doing the National Park tour of Costa Rica.  Santa Rosa was very nice, however, a dry tropical forest, and we were warmly greeted by Tam's friend Daniel, who works here studying monkeys. 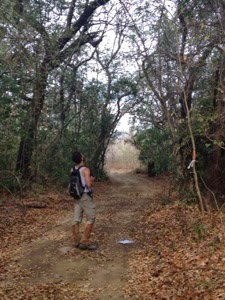 Daniel estimating the percentage of leaf cover for the tree above
We had a great day walking around with him and learning about the project, which researches the costs and benefits of being an alpha male white-faced capuchin monkey.  Plus we saw the most amazing bird I have ever seen: a keel-billed toucan!  Many thanks to Daniel and the whole research team for having us here! 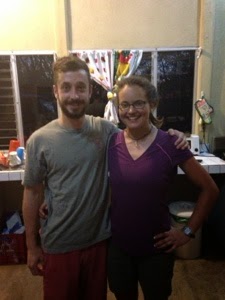 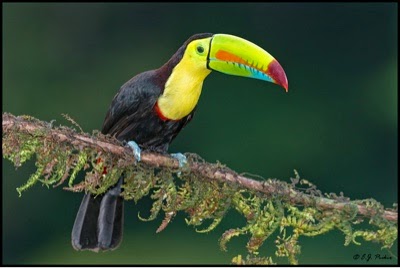