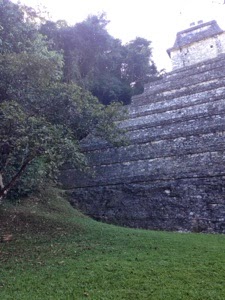 The Ruins at Palenque Rising From the Jungle
We left Tuxtla late in the morning, saying goodbye to the guys atTuxtla en Bici, passing by the mouth of the beautiful Cañón del Sumidero where we had spent some good time the day before, and then beginning to climb.  We had heard that there was some uphill, and we found soon that "some uphill" is a big understatement.  It's all uphill for almost 35 miles. 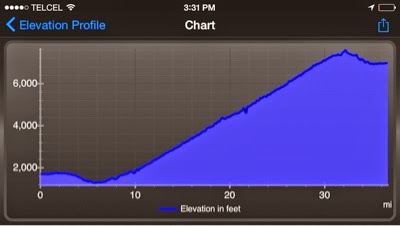 Yeah.... that looks about right.
But, with our aching muscles also came cooler, fresher air and a beautiful view of the valley below.  After awhile the valley floor disappeared in the haze, creating a wonderful floating feeling when we looked down. 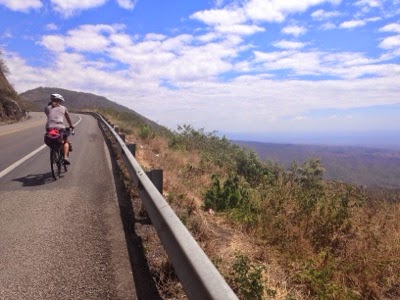 The environment soon changed, too, from shrubs and grasses to pine forest, a welcome change.  On both sides of the road, around the numerous indigenous villages, were steep tracts of land cleared for farmland.  There is no flat land anywhere on this mountain, so the people here make do with what they have.  Were we to go back in time a few hundred years, I bet this area would look very similar to today. 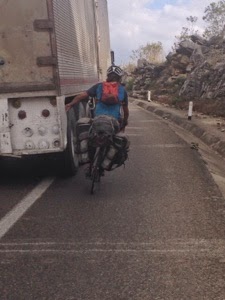 Max saving his legs for later
Hours later, we were still going up.  Fatigue was setting in as our shadows lengthened, and suddenly we heard a loud pop from Max's bike.  He stopped, looked, and swore in French.  A spoke had broken, and so close to the top!  We could fix it, like the one we had fixed a few days before, but there just wasn't time to remove the cassette, thread in the new spoke, put the cassette back on, and true the wheel.  He would have to hitchhike.  We made plans for later then continued up, still up, forever up through canyons and forest and now-chilly air.  Max passed us a few minutes later, grinning and waving from the back of a speeding pickup truck, and shortly after that we finally saw our destination, San Cristóbal de Las Casas, way down (!) in the next valley.  Flying downhill after an entire day of climbing was like a dream, though by now it was legitimately cold. The mountains, the clouds, the city below, and the sun hitting them all just perfectly with the last rays of the day all came together to form a landscape that I can still see clearly in my mind.
Down in San Cristóbal, dusk setting in, we saw Max beckoning to us from a gas station parking lot.  He was surrounded by motorcycles and men wearing leather, and when we got closer, he introduced us to Abel, a motorcyclist who had invited him, and us by extension, to his house!  Max's bike was non-functional, so we loaded up his stuff on our bikes and he hopped on the motorcycle, bike in hand. 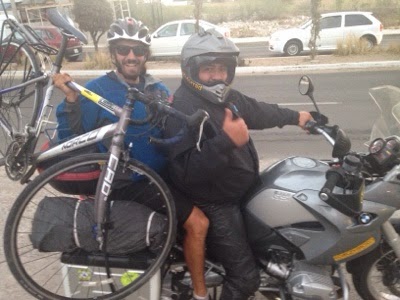 Abel and his family were all very nice, like 99% of the Mexicans we have met, but one of his friends was not so welcoming. In his eyes, anything not Mexican was not good, and anything gringo was worse.  His idea of welcoming us to beautiful and wonderful Mexico (in which we had traveled more than him) was to tell us how everything Mexican is great and how everything American, from the food to the people, is inferior.  It quickly became apparent that he didn't actually know anyone from the United States, and that his viewpoint had been shaped by the news media and by the small community of ex-pats in San Cristóbal.  It was difficult to bite my tongue, but nothing good would have come of rebuttal.  Fortunately Tam was there to elbow me every time I tried to open my mouth.
I was angry at this guy at the time, but now I can't help but empathize with him.  Even though immigration reform was just passed in the U.S. to be more amenable to Mexican-Americans, if all I knew about the U.S. were its immigration policies towards Mexicans, I would dislike it too.  And I can't help but see parallels between his closed-minded ignorance and that of so many people in the U.S.  Of all the people who told us we would get robbed or worse in Mexico, how many had actually been there?  How many actually knew any Mexicans?  Mexico and the U.S. are very different places, yes, and there are definitely places I would not go in either country, but this guy showed me again what I've already learned many times over: that it's irresponsible and wrong to judge an entire country or people based on either the stance of their government or what is reported in the media.
Some late-night tacos made everything better, and we spent the next day getting to know San Cristóbal de las Casas with Max and planning the Guatemala section of our trip.  San Cristóbal is a beautiful town, modern and clean, with a rich indigenous cultural history.  It was one of my favorite cities in Mexico, rivaling Guanajuato. 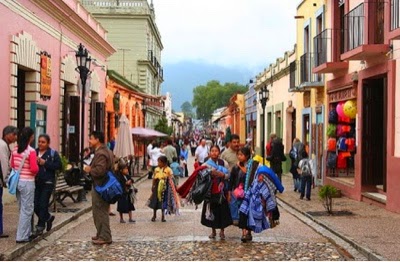 San Cristóbal de las Casas
Photo Credit: www.michaeldemeng.com
The day after, we woke up super early and boarded a "combi," a large van, to see some places a bit off our route.  Bicycling is all about getting to know the places between the places; today we would be going destination to destination.  The bus was hot and cramped, and the roads extremely mountainous with hundreds of potholes and speed bumps.  Fortunately the bus broke down about 20 minutes out of town, and we took the opportunity to stretch our legs and let the nausea subside by hiking up a nearby hill in the cool pine forest.
Too many hours later, we turned onto a side road to the Agua Azul Waterfall.  Just before the entrance was a rudimentary pay station, the gate a rope across the road, with a sign explaining that your 15 pesos would be funding the Zapatista movement.  We knew Chiapas was a hotbed for activism, especially for the Zapatistas, a largely indigenous movement based on land reform that culminated in their 1994 takeover of a few cities.  Then the military moved in, and not much has been heard from them since.  This was the first sign we had seen of their presence.
We spent an hour at the waterfall enjoying the lacy cascades.  The color of the water reminded us a lot of lakes and rivers in the Canadian Rockies, though the source of the color is different. 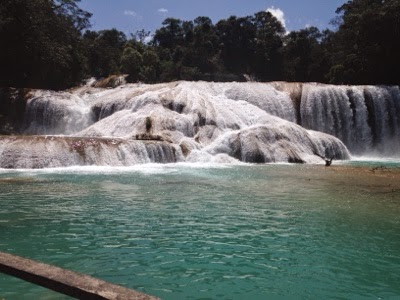 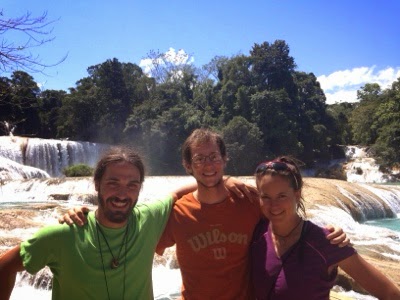 Max, me, and Tam
After Agua Azul we headed to Misol-Ha, another waterfall.  We swam and explored the area; interacting with the place made it mean so much more. 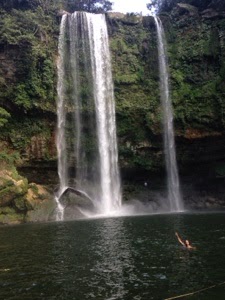 Finally to our final destination: Palenque.  I'm usually not a huge fan of ruins, but Palenque, with its ancient Mayan temples and palaces surrounded by sweaty jungle, was absolutely incredible.  Scaling the pyramids, wandering the passageways, marveling at the jungle vegetation and wildlife, it was all amazing, and I found myself regretting that we hadn't set ourselves up to spend more time at this mysterious and impressive site. 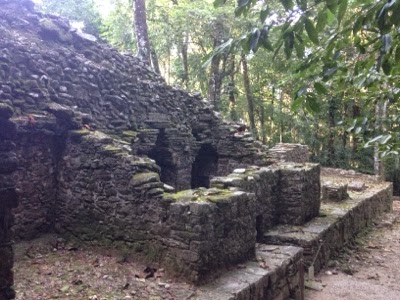 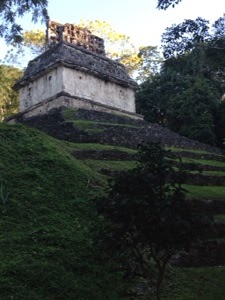 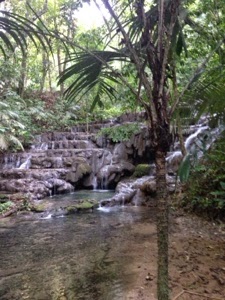 We also enjoyed the company of Dilah, an Indonesian student currently living in the state of Oaxaca to study indigenous methods of making textiles.  She was really interesting to talk with, and I'm sure we'll see her again in Indonesia!
We found ourselves back in San Cristóbal around 10 pm, utterly exhausted but glad we took the time to see these places.
The road from San Cristóbal to the Guatemalan border is roughly 180 kilometers, two days' ride, but we decided to take a short detour to El Chiflon, another huge waterfall.  The ride was almost all downhill, and the waterfall had a legitimate campground attached!  We had a nice nighttime swim.  Unfortunately, that night we also realized that we had left the Spot device, our GPS, at our lunch spot.  I can't express how idiotic and stressed we felt, and I spent the next morning taking all kinds of motorized transportation to try and get it back.  No luck.  Compounding our loss of the Spot was the fact that the replacement phone cord we had bought in San Cristóbal was not working, so we were unable to contact our parents at all. We had no choice but to go to the next city and see what we could find.
The road to Comitan was all uphill and steep, and starting in the middle of the day after my hectic, expensive, and ultimately fruitless morning, was absolute hell.  It must have been 100 degrees.  But we soldiered on, finally reaching the outskirts around 5 pm.  Never had I been so glad to see a shopping mall!  We ran in, found a functional phone charging cord, and let our parents know what was going on.  We also started talking with a really nice family who invited us to their house!  They live in the city of Las Margaritas, and while there was some confusion at first because we thought they wanted to take us out for margaritas, we ended up enjoying a wonderful night of food and family. 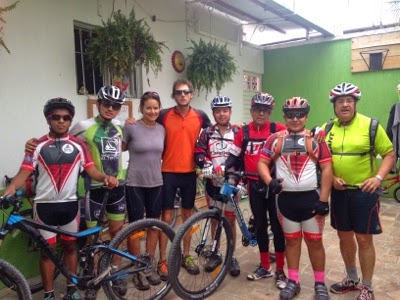 Our hosts were Luis, third from the right, and his son Mario, second from left.  They live in a large compound with all of their extended family, and they all mountain bike, from the grandmothers to the little kids.  The next morning, we went on a short ride with them and some friends from the local cycling club. 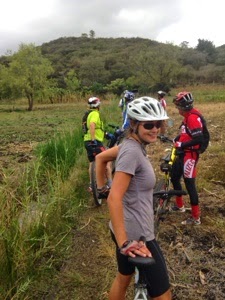 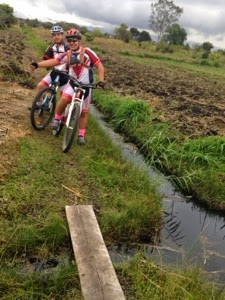 Jesus and Daniel, some young friends
In the afternoon, Luis showed us around the nearby city of Comitan, where he used to work as a school administrator, and we had some great conversations; Las Margaritas, where they live, is the original home of the Zapatista movement.  Today also happens to be March 6, Tam's birthday!  The family made a decadent comida (the largest meal of the day, eaten around 3 pm), and we got a cake to share later!  I think Tam would agree that it has been a wonderful start to her 25th year on earth.
Posted by Danny at 8:15 AM