Our night in Villa de Leyva was vastly bettered by local empanadas and garlic-olive bread, and by meeting two brothers: German, an architect designing a hospital here, and Angelo, a classical guitarist.  I can't say I've ever had a better time making pasta, with a feast for the ears emanating from Angelo's deft fingers. 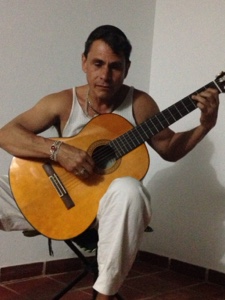 He strummed and plucked a long mix of classic rock- Kansas, Led Zeppelin, Simon & Garfunkel- the melodies and the chords at the same time, then launched into a series of technical and romantic songs.  The pasta tasted terrific, and we enjoyed chatting with the two of them for a bit as well.

The next morning, we headed south on some well-surfaced roads, taking advantage of an arepa-specializing restaurant in Tinjaca and enjoying the colorful handicrafts of Raquira. 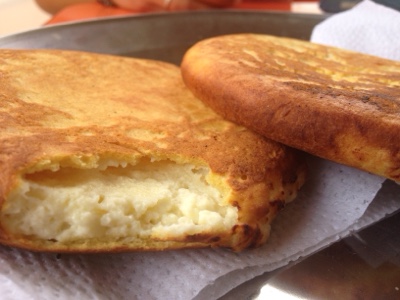 The whole area appeared to have been influenced in a positive way by the colonial draw of Villa de Leyva.  After Raquira, the road turned pretty bad, and we began to climb. 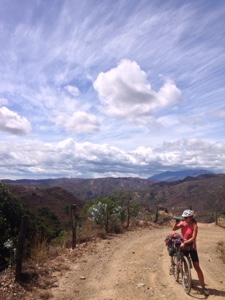 We had hoped to make it to Ubate but were so slowed down by the rough road and giant hill that we only reached Guacheta and decided to stay.  The owner of the hotel we decided to stay in, Gabriel, was really accommodating, even letting us use the kitchen of the restaurant.  In talking with him, he told us that Colombian currency didn't have enough value for him to save up enough to travel.  It's hard to know what to say in this situation, other than acknowledging our good fortune to be from a more developed country, but what I really wanted to point out was that he owns a hotel and was wearing an expensive Lacoste shirt.  Even with the exchange rate in Colombia, his hotel is undoubtedly worth a lot more money than we have spent on this ridiculously long trip, and it's possible to spend much less than we did.  We hear excuses from our American friends, too, all kinds of reasons they can't travel.  Really, all but the very poor have the means to get out there and go, but most put other things first (a career, a family, cable TV, beer, eating at restaurants, heating, basically anything that costs money).  And that's fine -- people can live their lives however they want -- but I wish people would acknowledge their actual priorities rather than simply saying "I can't." 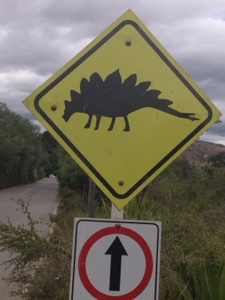 My priority for a few minutes was to find a stegosaurus crossing the road (this is an ad for the "dinosaur park" near Villa de Leyva). This is a stegosaurus, right? It's been a while since I last used my old dinosaur placemat.

While leaving, we gave Gabriel our contact information in the hopes that he would come visit us someday, wherever we end up. Then we biked to Ubate, following relatively smooth and flat dirt roads for the first time in awhile.  Instead of trying to brave the traffic into Bogota, we hopped on a bus in Ubate and found ourselves a short while later in the big city!  Even though we had a map showing some of the many bike lanes in the city (see below for the map), getting around was still a challenge, and we arrived at our friends' place around 5.  Meet Levi and Erin: 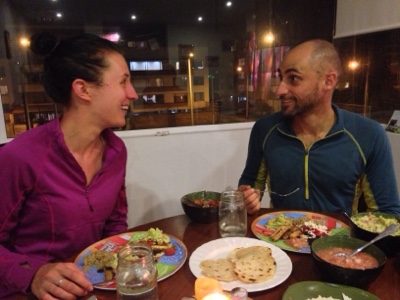 They have been teaching in Bogota for the last few months and just accepted a job at High Trails, our former place of work!  A mutual friend put us in touch, and the two of them were kind enough to have us at their place for a few days.  Actually it felt more like our place, because they were out adventuring over the long weekend and left the apartment to us!  We made tons of delicious food, visited almost every bike shop in the city, did a lot of work on the "Where" page of our blog, sightsaw, and did a lot of other random stuff.  Most importantly, we rested our legs for the first time in a while.  Many thanks, Levi and Erin!  See you down the road! 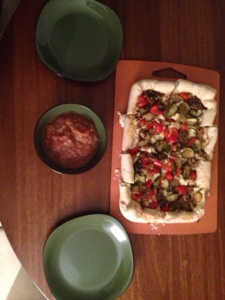 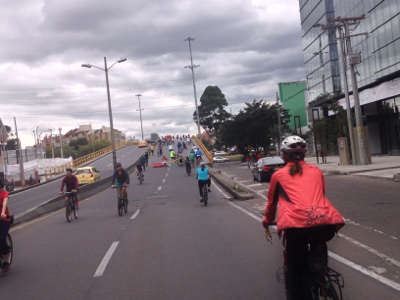 At the ciclopaseo on Calle 116. Every Sunday, this and some other roads in the city are closed to cars so that people can get outside on bikes, skateboards, or roller blades without worrying about being hit by a bus. 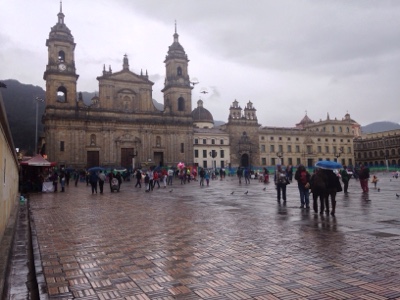 The big old church at the Plaza de Simon Bolivar. Most fun on our trip to the touristy area of La Candelaria was witnessing guinea pig gambling: place your money on the pail that the guinea pig enters, and win big!

We also made a lot of bread. One of Tam's neat loaves: 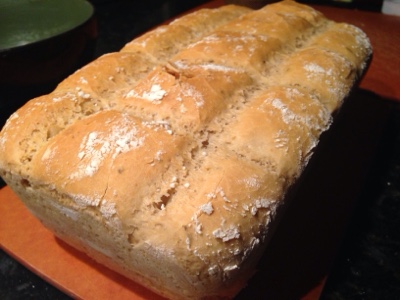 And one of mine: 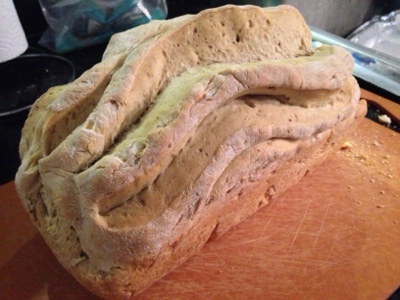 I dubbed it "the brain bread." 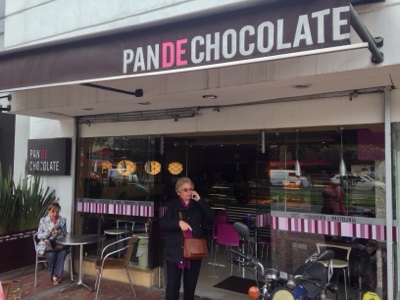 The best chocolate croissants ever.

After what seemed like just hours after arriving, we hopped back on the bikes and headed out of the city.  We had a fantastic route planned with bike paths all the way, but that plan ended quickly when our riverside trail met an eight lane highway with high medians.  Who designed this bike path?  We found a different way and made it out without ever feeling too overwhelmed.  Even so, it wasn't a fun ride.  The traffic died down a few miles outside the city, but around 4, heavy fog set in, reducing visibility to a few feet. 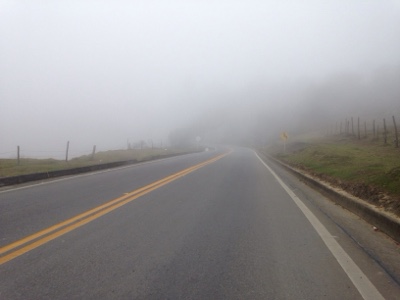 With a long descent to hot climates just ahead, we were happy to set up camp in the brisk temperatures of 9,000 feet in a quiet field behind a gas station.

The next morning, we began said descent. Stopping at a restaurant in Anapoima, a ritzy area with country homes for Bogota's elite, we ordered our staple meal, rice and eggs, and the guy offered fruit salad as well.  We hesitantly said yes, hoping to receive a bowl with fruit in it. Instead, we got this: 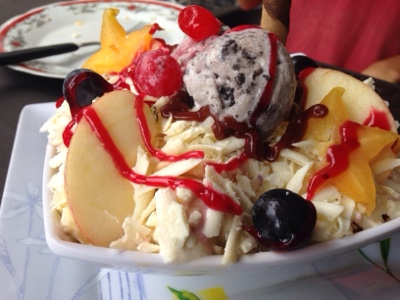 Fruit salad, Colombian style. Ice cream, yogurt, cheese, mysterious flavored sauces, maraschino cherries, a cookie stick, and some fruit underneath.
From now on, we're sticking to rice and eggs!  Nothing else!

We ended up in Girardot, where we ate some more arepas and I shaved off my beard.
Before: 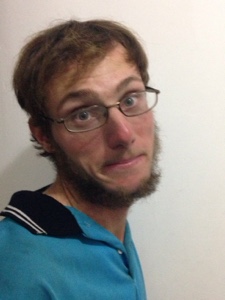 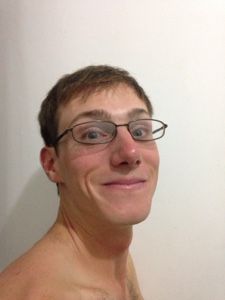 - Raquira to Guacheta was pretty rough. Rideable, and not so bad as the area around Gambita (see our previous post), but not easy going.  Fortunately the rough part is limited pretty much to the ascent, and the road into Guacheta are better, some parts paved.
- The 45A from Ubate, as seen from the bus, looked awful for cycling. From Zipaquira to Bogota, there was a bike lane every time I looked up from my book. I don't know about the whole way, but definitely at least in parts.
- Getting around Bogota is simple in theory but not in actuality. Calles run east-west, their numbers increasing as you go north. Carreras run north-south, their numbers increasing as you move west.  Bike paths are abundant but sometimes deposit you into a freeway.  My recommendation for getting around: stick to the biggest roads possible that have bike lanes. And use this map. 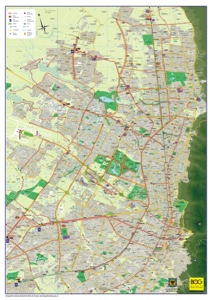 Email me for a high quality version. This is much better than the Open Cycle Map for Bogota.
- The majority of bike shops in the city are on Calle 68 from Carreras 24-30. There are others on Calle 127 near Carrera 55.  The service we received at most of these shops was awful; probably better to do everything yourself.  We are not bike mechanics, but after realizing that the bike mechanics at the shops aren't either, we watched YouTube videos of the repairs we needed to do, then just asked to borrow the tools.
- Leaving the city through Calle 80 wasn't horrible, but Highway 21 was almost until the intersection with 21 to Soacha. There was room in the bumpy drainage gutter to get off the road if necessary. Traffic for us was exacerbated by construction. If I were to do it again, I would take back roads -- or a bus. The descent to Girardot had trucks here and there but nothing too bad.