After our wonderful, restful night, we enjoyed a tranquil morning with pancakes and indie music.  With our own cabin, it had felt like we switched lives with someone else!  Our stay at La Violeta in Susacon was absolutely luxurious; thanks, Constancia!  Back on the bikes, we woke up our legs and headed towards Duitama.  The road was quiet and smooth with high ridges all around, checkered fields and pastures reaching up into the clouds. 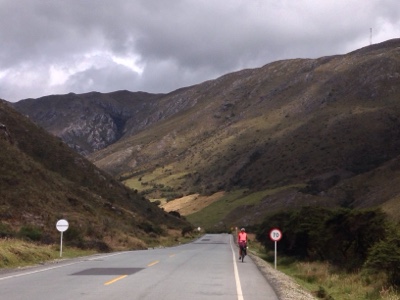 We climbed and climbed, the road finally leveling off and following a meandering stream gradually uphill through a narrow canyon.  The clear water, the steep-walled canyon, the cool breeze... I couldn't help but smile, and also couldn't place why I was so randomly happy until we came upon a pasture and some cows: here at the top of this pass was the first place in a long time where our road was not surrounded by houses and fields!  There were no dogs chasing us, no people staring, no music blaring.  It was just us and the wind up at 11,000 feet.  We stopped and celebrated the present the best way one can: with Oreos, leftover pasta, peanuts, and tart mandarins (not all together).

After our snack, we rode some more until reaching a tiny village and stopping for lunch at a restaurant.  To explain what vegetarianism is and list all the foods we eat is a bit tedious (because, believe it or not, most people think we eat exclusively vegetables), so usually we just ask at restaurants for large plates of rice and eggs, two things that are unlikely, by themselves, to come with meat in them.  Simple and filling, we spice up the meal with our own veggies and seasoning.  At this restaurant, the lady asked if we wanted salad with our meal; of course!  It seemed unthinkable that a vegetable salad could be unhealthful, but unfortunately, this salad was covered in mayonnaise and canned ham.  Sigh.

We soon dropped into a wide valley, descending steep switchbacks so quickly that we passed a few cars and trucks.  The town of Belen appeared, and, though we only spent a few minutes there, the numerous cheese shops meant that this town would always have a favorable spot in my memory.

A few hours later, after powering up another pass and descending numerous thousands of feet on the other side, we ended up in Duitama at the house of Reynaldo, the brother of a Warmshowers host. 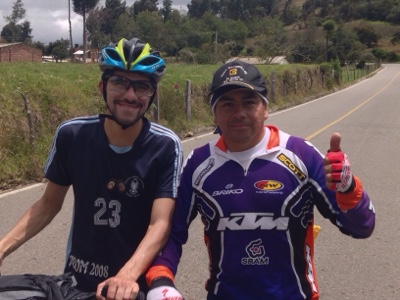 Reynaldo on the right with his amigo, Hugo

He and his wife Maria were very friendly, though they, like everybody else, were unsure of how to relate to us after we tactfully informed them that we prefer not to eat dead animals.  ("So, do you eat beans?"  "Yes, we like to eat beans."  "How about juice?  Do you drink juice?"). Reynaldo eats pretty much just meat all the time, so to say that there was much misunderstanding between us would be an understatement.

The next morning we enjoyed a wonderful breakfast of huevos pericos, (scrambled eggs with onion and tomato), grilled cheese, and guava juice with Reynaldo, Mario, their son (or nephew? Not sure), and a friend, Hugo.  Reynaldo and Hugo subsequently rode out with us on some back roads to Paipa, where they opened our eyes to delicious almojábanas and pandeyuca, local pastries made from yucca root.  We also picked up some queso paipa, the only local aged cheese you can get in Colombia.  Then we began to climb.  Reynaldo had recommended to us a route that follows good, untrafficked roads, so we followed him and Hugo up into the hills.  Many thanks to Reynaldo and Hugo for showing us where to go and sharing a pleasant morning with us. 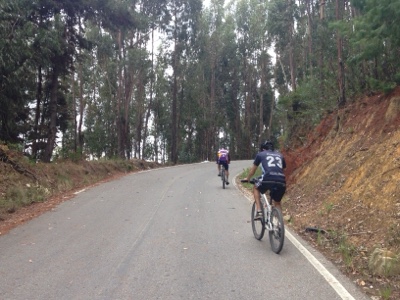 After a good workout, we said our goodbyes and thanks, and while they turned around and headed back, we continued, watching the town shrink behind us and finally disappear as a new valley came into view. 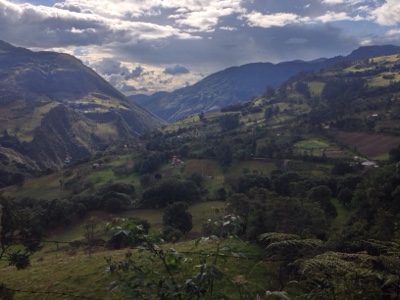 In high spirits with an outstanding vista, guacamole in our stomachs, and a solid dirt road beneath our wheels, we started the descent, but just a few minutes in, the road turned horrible. 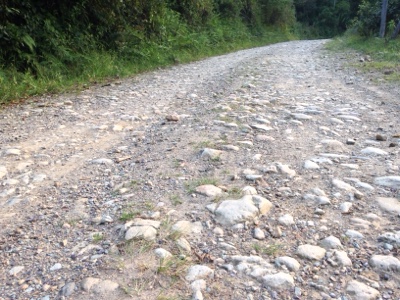 Bone jarring, hand numbing, bike killing horrible.  We had no idea why Reynaldo had recommended this way, but we surmised that he had never actually been here on a bike.  The scenery was beautiful, as always, and because it took us longer to descend than it had to ascend, we had plenty of time to take it in. 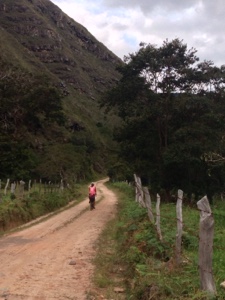 After reaching the bottom of the valley and passing through the town of Palermo, we set up camp in a field next to a river, ate a quick dinner, and soon fell asleep.

The road the next day was marginally better in parts.  We made it to Gambita, where we found a guy willing to let us use his computer for awhile to plan and send some emails.  After, as Tam went into a store, a group of schoolchildren approached me, wondering about our bikes and whatnot. I told them I was from the United States, and they all said in unison, "los Estados Unidos?!"  It was really cute.  I don't think it's so novel, to be from the U.S, but they did and spent the next few minutes asking me (and Tam when she came out) to translate words and phrases into English.  Finally we said goodbye, and, piecing together some of what Tam and I had translated, the kids said, "Bye bye, people foreigners!"  Ah, well, a good attempt at least, one I'll take any day over "adios, gringo!"

Hitting the road again after some yummy rice and eggs with breaded yucca-and-cheese sticks, we tackled some steep hills, bouncing around the whole way, and made it almost to the town of La Palma before deciding we had had enough and setting up camp among some chickens and cows in a field. 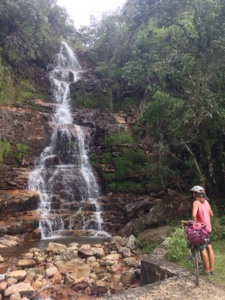 A waterfall next to the road 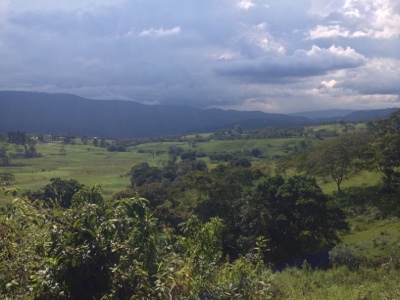 The next morning, the road flattened out a bit and we cruised to La Palma.  In town, we started talking with a guy who was about to drive his truck to the next town, and he agreed to take us along.  Happy to be done with riding on this awful road, we stood in the truck bed, our bikes on the floor, and enjoyed the scenery going by.  Even though Arcabuco was only 20 km away, the truck took hours to get there.  On arrival, the driver refused payment, nice guy that he was, and we rested after our super tough morning with a delicious lunch (more rice and eggs with veggies and, this time, some cheese almojabanas). 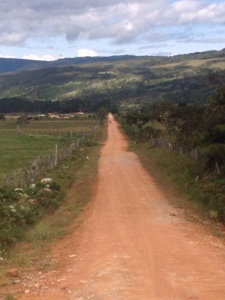 A long flat section near La Palma. The speck on the road in the distance is Tam. 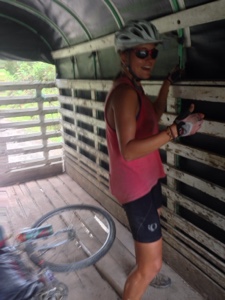 Bouncing around in the back of the truck 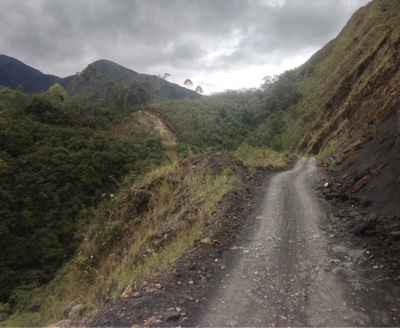 The ascent to Arcabuco, as seen from the truck

From Arcabuco, we were excited to ride on some better roads to Villa de Leyva, and we choose the slightly longer, well-surfaced version, stopping at a nice waterfall in the middle and reaching Villa de Leyva around 4.  We found a steal on a hospedaje, which, ironically, is called Sueños de Daniel (Daniel's Dreams), and set about exploring and enjoying this beautiful colonial town. 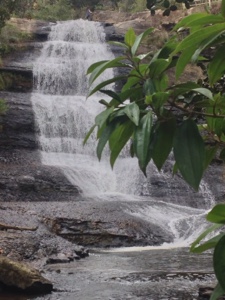 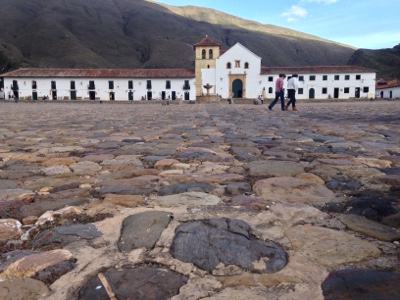 Route notes for other cyclists:
- Highway 55 between Soata and Duitama is about 99% paved with beautiful scenery and little traffic.  The traffic picks up a little bit more after Belen, but it's still very manageable.
- The road west from Paipa is paved until almost the top of the pass, where it becomes smooth dirt for maybe 2 km then really rough all the way to Gambita, with the exception of a few short, paved parts.  More of the same rough road from Gambita to Arcabuco, with short, steep hills just south of Gambita and some flats for awhile around La Palma, then a big climb up to Arcabuco.
- About 10 km after Palermo, just before the road starts to switchback up towards Gambita, there is a nice campsite right by a stream.  There's also a beautiful waterfall maybe 100 meters up the road from there.
- Arcabuco to Villa de Leyva: Two options, paved (mostly) or dirt (mostly).  We chose paved, and the surface was really good for awhile.  Somehow, according to Google Maps, we took a turn somewhere and ended up on the dirt one, which was decent as well.  Because, at the intersection of the two, all we saw where GMaps shows the paved road was a rough dirt road, I think their designation of paved/unpaved is wrong in this instance.  When in doubt, follow the better road, not the map.
Posted by Danny at 2:53 PM