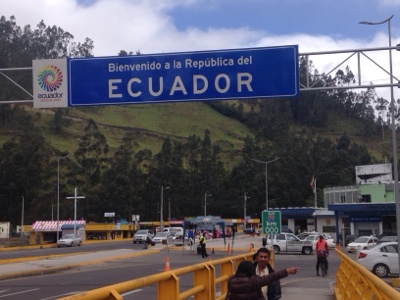 In order to make it to Quito on time, we decided to take a bus from Popayan to Ipiales, on the border with Ecuador. Ronald helped us figure out the buses then saw us off. With great company and food, our stay at his place in Popayan was wonderful! Thanks again for everything! 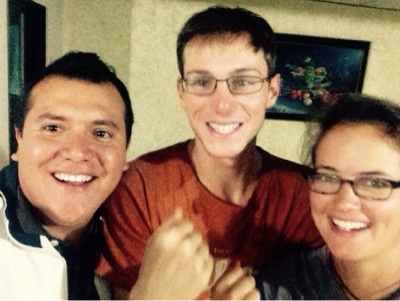 Holding up the "Popayan" bracelets Ronald got us

The bus was, well, a long bus ride, not much more to say. We did find it rather confusing as to why we were speeding along in this megabus at excessive speeds, passing trucks and other buses on winding mountain roads, but then we stopped for breakfast for an hour . Can't people bring snacks?

After transferring buses in Pasto, we rolled in to Ipiales. There are a bunch of cheap hotels next to the bus terminal, so we bedded down for the night, both of us intensely engaged in our books (Dune for Tam and Cryptonomicon for me).

Instead of simply heading out of Colombia the next day, we had one more thing to see: the church at Las Lajas. Like other religious sites, this one was formed from a seemingly insignificant event (a child telling her mom that a mestizo was calling to her) but has now become, with its breathtaking bridges and waterfalls, a place of peace and spirituality popular with tourists and pilgrims. 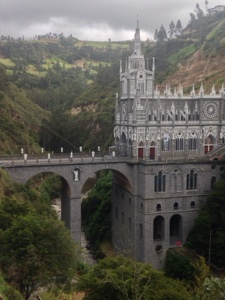 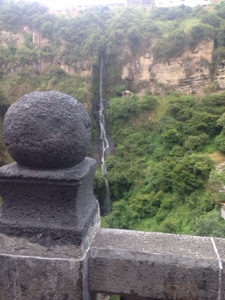 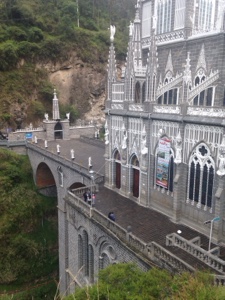 Soon after leaving the Santuario, we crossed into Ecuador! Despite the long line, this was one of our easiest crossings yet. Total time spent talking with officials from both countries: maybe one minute.

We ascended to Tulcan, continuing through the town until we found what we were looking for: 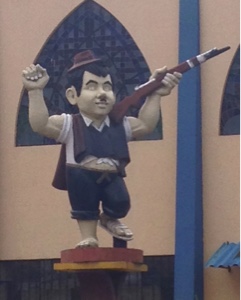 This unmistakeable statue was mentioned by a cycling blog (http://velofreedom.bike/2014/01/09/an-eventful-introduction-to-ecuador/) as the marker for the turn off the Pan-Am and up into the mountains. We took the smaller road with gusto, leaving the traffic behind and climbing at first past farms, their checkered shades of green and brown spread over the hills below, and then past wild páramo, the El Angel Ecological Reserve. The road turned muddy as a light rain began to fall but thankfully stayed rideable even though the going was slow (our recent mud practice in Colombia was paying off!). The same cycling blog as before mentioned the reserve's visitor center as being a great place to stay, but we didn't make it there and instead pulled off the road to camp in a meadow. 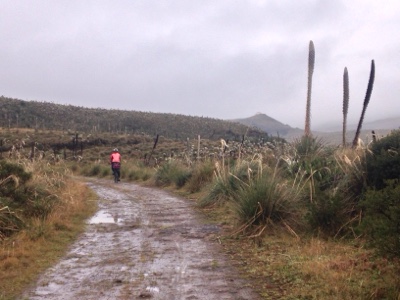 After a night of rain, the mud and puddles in the road had deepened to often unrideable depths. Couple that with tons of rocks, and we were churning through a simultaneously slippery yet bumpy ride, no easy going for us on our mid-size touring tires. Had we been passing farms, I might not have been so happy, but the beauty of the untouched expanse of páramo made up for any physical difficulties. 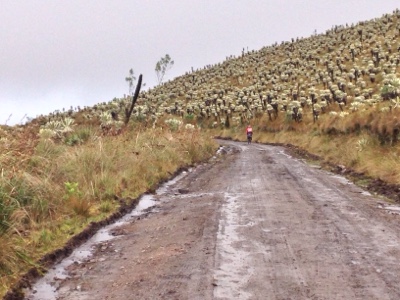 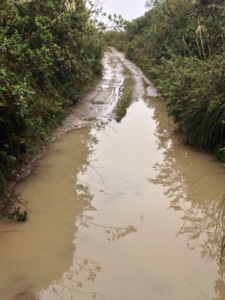 You never know how deep it's going to be...

At one point we were approaching a turn and just around the bend was a herd of wild llamas! They were so ridiculously cute, like shaggy deer with extra-long necks, and we stopped to watch them feed and walk around looking silly. 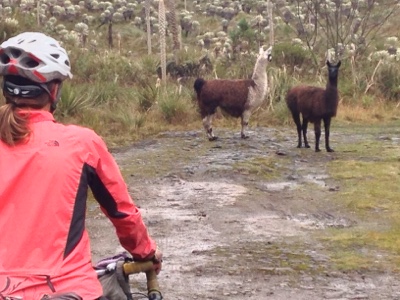 As we began riding again, one of the llamas ran ahead of us in the road. It must have thought we were chasing it. We stopped riding whenever it turned around to attempt to return to the group, but it was too scared of us to pass on the narrow track. After playing this game for multiple kilometers, finally it summoned up the nerve to run by as we crouched behind our bikes trying to appear inconspicuous.

Around midday we arrived at the visitors center and were treated to some warm drinks and friendly company by the park staff. We also enjoyed chatting with Katrin and Daniel, a super nice couple visiting for a few weeks from Switzerland.  Then we began the descent. The road was pretty bumpy, as before, though much less muddy on this side, and we made it out of the clouds before I realized that the constant shaking had jarred loose my glasses case. It was up on the road somewhere. Fortunately some of the park staff had picked it up while motoring down the hill and passed it off to me as I rode back up, no harm done. 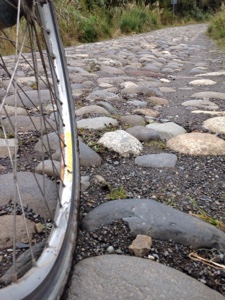 I have a love-hate relationship with cobbles, mostly hate.

The road turned from mud, to dirt, to rocks, to cobbles, then back to mud again before we reached the town of El Angel and found a cheap hotel, our bodies exhausted from the constant shaking. We went out to eat, happily finding non-sweet white bread (Colombian bread is astronomically sweet) and enjoying, as well, a flavorful meal for just a couple of dollars.

Leaving El Angel the next morning took a while, as our bikes needed some work after the mud, but we finally got on the road and enjoyed a quick 5,000 foot descent to meet up with the Pan-Am. 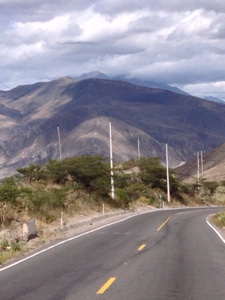 We appreciated the pavement every second of the way. Riding past fields of sugar cane, we started climbing again immediately and reached Ibarra in time for lunch, a delicious mix of lentils, rice, plantains, and eggs. 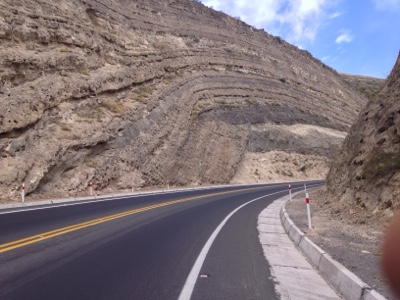 Just before leaving Ibarra, I ran in to a store to find Wi-Fi, and while I was in there, Tam started talking with a guy named Mario who invited us to his house! He lives a few kilometers out of town, and when we stopped in, his family was really welcoming, even to the point of pressuring us to stay longer than the one night we had planned! We played basketball with young Ivan and talked awhile in English with teenage Carol, who had just returned from an exchange program in the U.S.  Mario showed us around the factory of his shirt-making business and gave us new t-shirts! We were so fortunate to meet this family; many thanks to Mario, Cecilia, Carol, and Ivan. 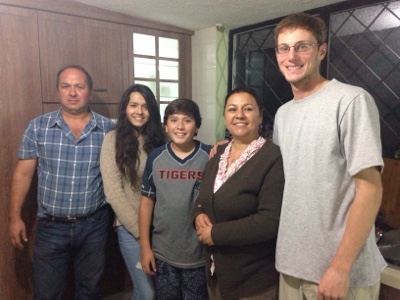 Route/Area Notes:
- We didn't feel like a hilly out-and-back, so we took a colectivo to Las Lajas from the bus terminal in Ipiales for COP$2,200 (roughly $1) per person.
- Leaving Colombia and entering Ecuador were both free and hassle-free.
- The El Angel road has zero traffic and good dirt up to above maybe 10,000 feet on the Tulcan side, where it gets quite bumpy and muddy if it has been raining (which is likely). More of the same on the El Angel side, with less mud but more bumps, and cobbles for numerous kilometers when nearing the town of El Angel. El Angel to the Pan-Am is all paved.
- Lots of traffic on the Pana, but always either a shoulder or multiple lanes. Six-lane highway south of Ibarra. Very few services in the kilometers north of Ibarra.
Posted by Danny at 7:37 PM