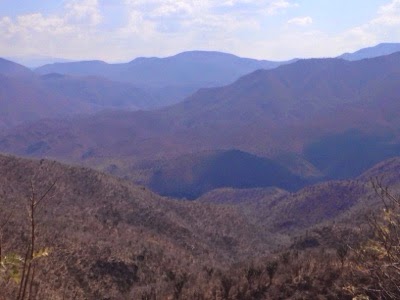 Oaxaca's topography: mountains, mountains, and more mountains
February 18
We said our goodbyes early in the morning to Alfonso and Alicia and headed up the hill. 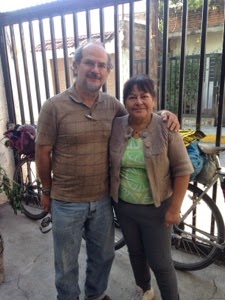 Thanks guys!
Huajuapan is in a valley, so any way we went, we knew it would be up, and when you're prepared, the hills seem just a bit smaller.  So up and up we went, then down and down into the next valley, where there was a small river with a couple of waterfalls!  After being in the desert for so long (and still surrounded by cacti), the sight of this river was therapeutic. 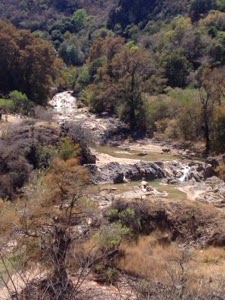 We stayed a few minutes then headed up the next hill to the town of Tamasulapam, stopping for lunch shortly after.  Lunch was awesome: queso blanco, avocado, and cucumber wrapped in pitas (Arab tortillas they're called here).  Crunchy, creamy, salty, and all freshly made and bought that morning!
It's always a crapshoot when you look at a 2-D map and try to decide whether the road is going up or down.  Sometimes all you see is a squiggly line, and you know that you'll be going either really fast or really slow, but you don't know which. 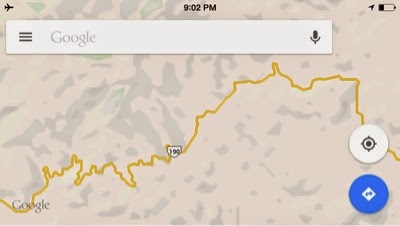 This time we thought we had it figured out, but after the "pass," we kept going up, and up and up some more!  We must have been over 8,000 feet.  A group of supported cyclists on a weeklong tour was also heading up, and we chatted with them a bit before they blew past us easily on their unloaded road bikes.
Finally, the top!  The descent into the next valley was fantastic but nowhere near as long as what we had come up.  We talked with the supported cyclists again as they visited what must have been a centuries-old church, and we saw them a third time as we pulled into the town of Nochixtlan.  The riding at the end of the day had been in a valley, which meant it was flat!  More or less. 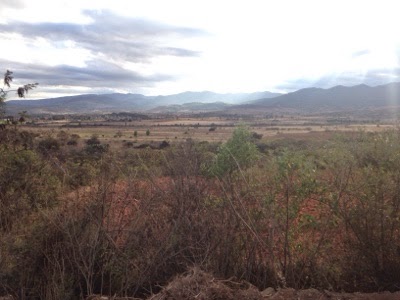 Beautiful, flat valley
The hotel that the supported tour guys (and one gal) were staying in was a good deal- 200 pesos or roughly $14 US- so we stayed there, too.  And we didn't mind lugging our bikes up five flights of stairs, because it was quiet all the way up there (and a nice guy carried Tam's bike up for her).
February 19
Oaxaca City!  The toll road into the outskirts had a great shoulder, and we enjoyed going farther down each downhill than up each uphill.  The actual city, like most cities, wasn't so easy to bike into.  The taxis and buses were crazier here than anywhere we had seen. 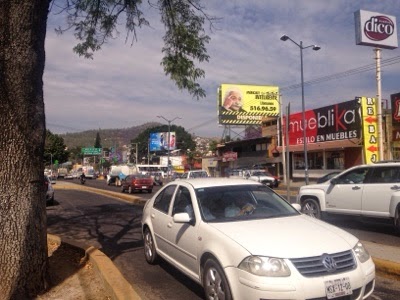 Here there are four lanes, but the middle two are going in the wrong direction... 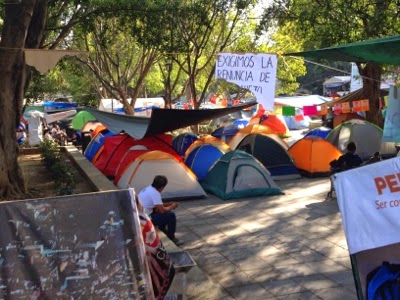 Teachers striking in the Zocalo
While we were excited to visit Oaxaca for a number of reasons, peanut butter was one that you might not expect.  We officially renounced our search to find peanut butter without hydrogenated oils and sweeteners and gave in to the reality of eating Skippy, and Oaxaca was the first place where we could find it.  Oh, how far we've sunk.  And oh, how good was that Skippy with some freshly ground chocolate.
After visiting the main plaza, we headed over to the place of a Warmshowers host, Lauren, and had a great time hanging out late into the night with her and her partner, Kiefer.  We had wanted to update the blog there, too, but I think we got our priorities right: 1) playing with this adorable puppy. 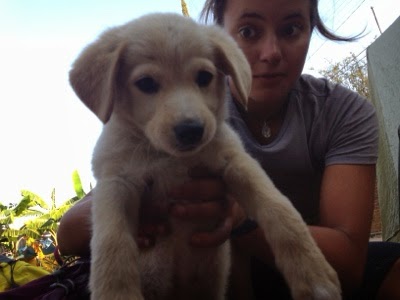 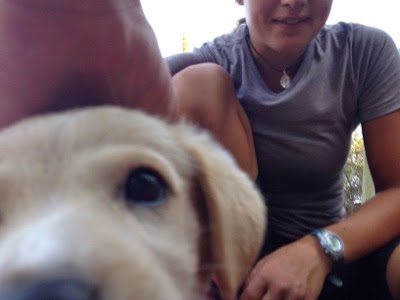 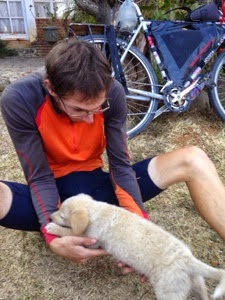 February 20
Lauren rode with us to the farmer's market, a group of stands not too far from her place.  We got some goodies for the road, and I ate a drop of what must have been the spiciest salsa in the world.  The way out of town was super easy; the old railroad was converted into a bike path and takes you all the way past the craziness! 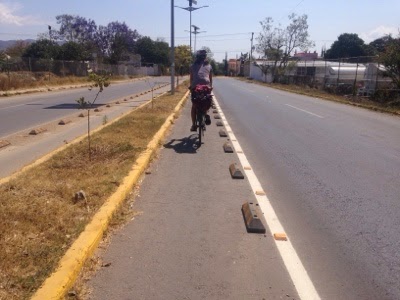 Our first stop was in Tule, where there's the biggest tree in the world (widest, not biggest by volume). 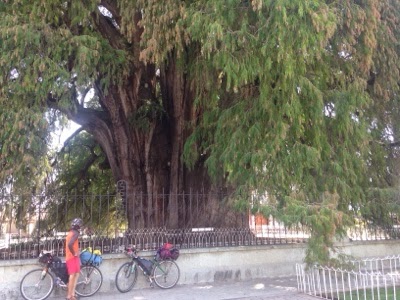 Pretty big.
We left late and only had time to get in about a half day of biking, which took us to the town of Mitla.  Here there are groups of Zapotec ruins over six hundred years old, some of which are unrestored and scattered throughout the town.  We arrived just in time to walk around the gated ruins before they closed for the night.  These specific buildings are know for their intricate stone mosaics. 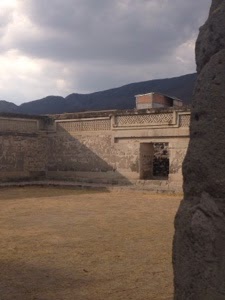 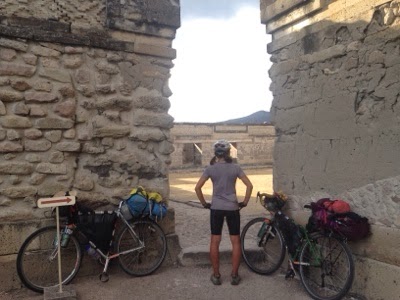 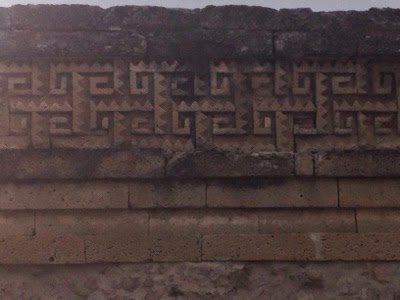 A guy who works to help tourism in Mitla invited us to stay at his house!  We are wary of tourist helper people, as they're usually looking to get their hands in your pockets, but Armando was genuine. 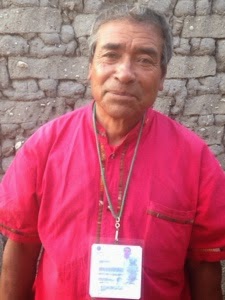 It was interesting to talk with him about the clash of indigenous and Spanish culture, a clash that's still being felt today.  It's easy to see in Mitla; a church stands on top of many of the original structures.  He was interested to hear about Alaska and how things work there.
February 21
The day was already hot when we began.  From Mitla we went up and up, but we were excited to ascend because the higher we went, the cooler it was and the more trees there were.  You could say that we're sick of cacti.  Unfortunately, just as we were reaching the high elevation pine forest, the road took a decidedly downward turn for about 20 kilometers. 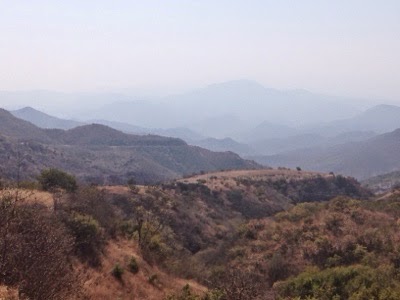 View from the top
Shucks.  Now instead of 80 degrees, it was 90 degrees.  And back up we went.  After the next big pass, we stopped at a little restaurant to cool off.  We don't usually drink anything but water, but a cool can of guayaba juice definitely hit the spot, as did a dip in the river! 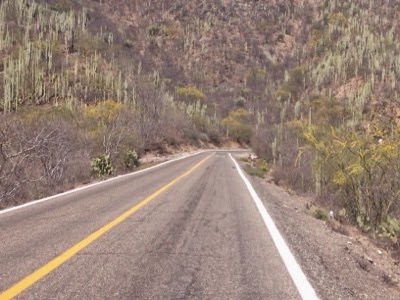 Surrounded by cacti
The rest of the day took us through a big gorge with steep walls, the shadows making interesting patterns with the setting sun. 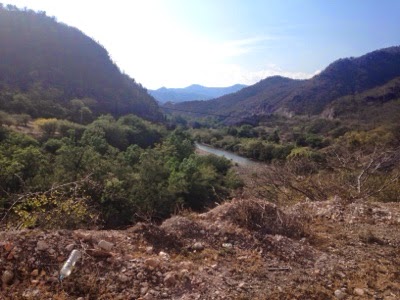 The river gorge
We found a little town and camped out near there next to the river.  The sound of the rushing water, followed by a pre-bedtime swim, made for a restful night. 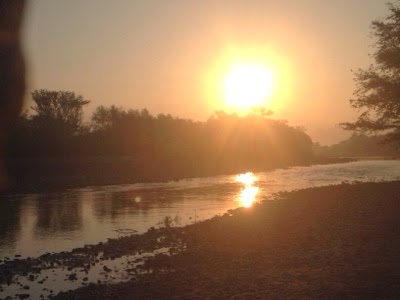 February 22
The best night's sleep I've had in awhile. I do love rivers.  We woke up super early to beat the heat and immediately began climbing.  All the better; climb in the morning when it's cool, descend in the afternoon.  Again, just as we reached the pine forest, the world fell away and we went all the way back down.  On the way we picked up twelve mandarins, a block of cheese, and two bananas, all for 21 pesos (roughly $1.50), and all of which we ate before and at lunch. 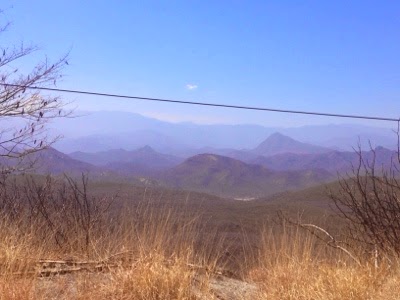 A nice view from along the way
It was super hot at the bottom, and we reached a little town around 1 and stopped for a long while.  No point biking during the hottest part of the day.  The lady who owned the store we stopped at (really the store was the front room of her house) said that the rest of the way was flat, but we didn't believe her.  Flat?  In Oaxaca?  Turns out she was mostly right.  It wasn't just flat; it was waaaay downhill and then flat.  All in all, we must have lost over 7,000 feet of elevation today.  And if we thought it was hot before, being at the bottom of this new valley was like being in a furnace.  Palm trees lined the fields.  For the second time, the first being just south of Mazatlan, I truly felt like we were in the tropics. 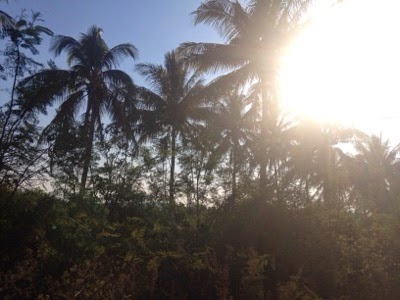 We paid a few extra pesos tonight for air conditioning.  The forecast for tomorrow says 94 degrees.
Posted by Danny at 5:45 PM