The city.  In Mexico, there's only really one.  It has 20 million people, which sets it firmly among the largest in the world.  The arrows on the highway point only to "Mexico" as if the rest of the country weren't there at all. 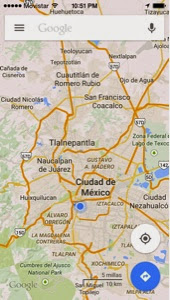 This, of course, is Mexico City.  Our original plan was to avoid it entirely.  Then, after hearing from so many people that the city is everything in this country, we decided to bike around it and take a bus in.  What really happened was neither of those.  This morning, after a horrible night's sleep due to loud, drunken singing during the night, we started our ride here: 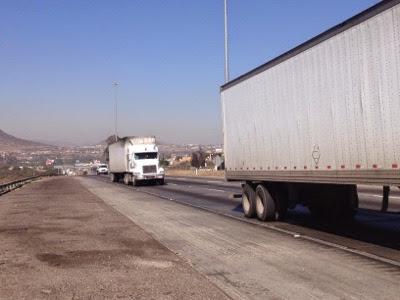 Three lanes of trucks.
There are smaller roads, but we're not particularly interested in prolonging our time in this huge, densely-populated populated region.  So, rather than suffer through a few days of traffic, we hopped on a bus and found ourselves a few hours later in Mexico City!  Biking in this concrete jungle was actually pretty easy due to the abundance of bike infrastructure and the city's grid-like layout.  We're staying tonight with an amiable and welcoming warmshowers host, Antonio, and we'll spend the next few days getting to know the city (one or two of the gazillion museums, ruins, and historical centers).
Posted by Danny at 8:53 PM