Leaving our little hostel in Antofagasta de la Sierra, the old lady who owns it asks us for 50 extra pesos to pay for the gas we used in the kitchen. The money isn't a problem (50 pesos is only about $4) but we're frustrated that she didn't tell us before when we settled on a price for the room and use of the kitchen. When we ask her to please inform future tourists that they need to pay extra for gas ahead of time, she gets angry and says that everyone already knows they have to pay for gas. Since we have never had to pay extra for gas, perhaps this is something that only happens in Argentina?
We learn an important lesson: don't assume that anything is included in the price, even if they say it's okay to use it. We pay the money and leave.

It's a bit of a rough start to the morning. We didn't want to cause problems with the owner, since she had been so nice, but sometimes cultural expectations can cause misunderstandings. We're happy to be on the road and spend the morning zooming by huge black volcanic rocks and the cones that spewed them out, talking about culture and communication. Our road is paved for the first time in a while, so we make great progress. 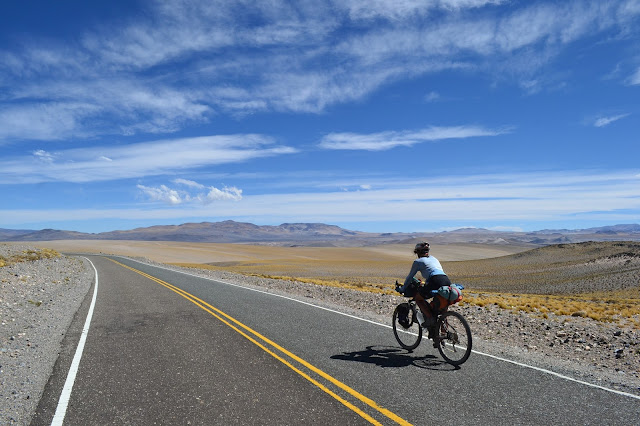 Around lunch time we arrive in a small town, and when we stop to fill up water at a police station, the two friendly officers invite us to eat inside. What a welcome respite from the wind!

When we emerge outside once more, the wind is still howling but it's mostly at our backs. We travel up and down the undulations of the landscape, passing numerous valleys filled with golden grasses and matching vicunas and rheas. The princess in Rumplestiltskin should have brought the king here. Is this enough gold for you? It's beautiful.

It's hard to beat this landscape illuminated by the morning sun. Behind us is a 6000+ meter mountain with a long ridgeline decorated in ribbons of snow. Ahead is a mountain that appears to have a long glacier on it, but the "glacier" is actually just a crazy-looking rock formation. Our descent brings us into a steep canyon where we discover enormous sand dunes that have spilled over the rock walls in gentle waves.


Before long we're out of the mountains and into the lowland desert. It's hot but surprisingly green. We stop under a lovely shady tree for lunch; how I've missed trees! As we eat we're approached by a local guy. He's thin, with his belt cinched tight around his waist and a lined, sun-worn face. When we inquire about what he does here he explains that his family has a farm, but they can't grow much right now because it's so dry and it hasn't rained in a long time. They used to have a lot of animals, but now all the kids have grown up and gone to the cities, and the community here is much smaller. It sounds like urbanization, and perhaps climate change, is slowly becoming the death of the northern Argentinian farmer.

Heading down the road we do see a good amount of livestock enjoying the cool mud and water in the rivers. It's our first sighting of the famous Argentinian beef! There are also tons of new birds down here. Our favorite? Several large and noisy flocks of burrowing parrots perched on a mottled sandstone cliff. What rambunctious birds!


The next morning marks our first ride on Route 40. With a length of over 5,000 kilometers, this road is famous for being one of the longest roads in the world, and in fact, it would be easy for us to stay on it. We'd be in Ushuaia in less than two months! But of course, we're not doing that, as it would be far too boring. Instead we're planning on spending the next two weeks doing a remote, challenging, and beautiful loop in the mountains that will bring us little southerly progress!

Route notes:
As usual, the Pikes have got it covered here. In Belen, everything is a bit pricey except for ice cream; check out any of the many places around the main plaza.
Posted by Tamara at 10:47 AM