There's free oatmeal and bananas for breakfast at the hostel this morning. We fuel up and then set out to begin the long climb to the mountain town of Boquete. The road we're on, strangely enough, is paved better than the Pan-am, with four lanes, a shoulder, and very minimal traffic. We see lots of other cyclists out (I imagine that this is a popular big hill climb) and some road signs that inform cars to respect cyclists. I'm happy with our choice of road. 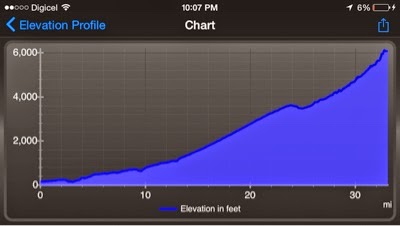 The climb is very gradual and the clouds have cleared enough that we have a view of the jagged volcano we're hoping to climb tomorrow. Otherwise, the scenery is unremarkable. The most exciting thing that happens on the way up is that we hit the 10,000 mile mark of our entire journey! Woohoo!
Once in Boquete, we inquire about climbing the volcano and the other well known trail in the park, Sendero de Los Quetzales (Trail of the Quetzals.) We are told that a guide is required for both and that the cost is $65 per person. We decide to ignore this and go explore further on our own.
Slowly we start to climb up and away from Boquete. Slowly, because the road has one incredibly steep hill after another. The pain in our legs is compensated by the beautiful scenery. We see only a few houses and cars. Mostly it's just us, the birds singing, and a clear gurgling river. 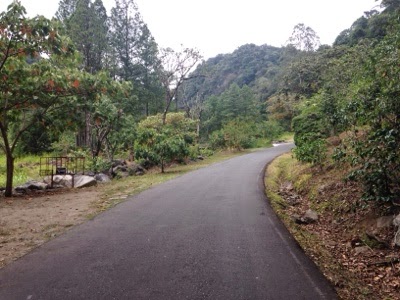 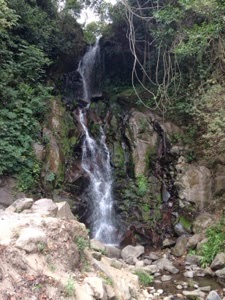 After some tough biking we reach the turnoff to the park ranger station and soon after I see a sign for a campground. Here we stop to ask for information and find out that we are in fact on the wrong road to climb the volcano; that road started back in Boquete! Not about to turn around after we had come so far, we decide to relinquish our dreams of climbing the volcano and instead continue another couple kms to the Sendero de Los Quetzales.
The last few kms are the steepest. We end up pushing our bikes up the last big hill as it starts to rain. 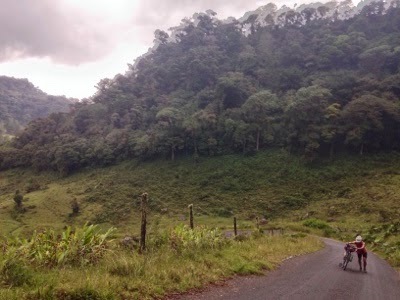 Pushing up the last bit
And then, there's the ranger station! A bright, friendly-looking, two-story cabin painted in warm yellow with green waves. 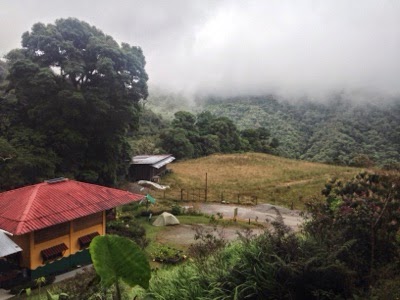 The ranger station, our tent out front
Out rushes the ranger, Carlos, to greet us as if we were old friends. Carlos has been working here for 12 years and says he can't remember anyone else biking up here; everyone else comes in car or bus. He's a fantastically nice guy. Forget the park fees, we can camp anywhere, or sleep in the bunk beds upstairs, we can heat water on the stove to make dinner, borrow his bird book, and that $65 required guide? No, we can hike wherever, whenever we want.
What an amazing haven from the now-pouring rain! This is more than we ever could have expected. So many thanks to Carlos! We spend a wonderful evening sharing stories and watching birds. 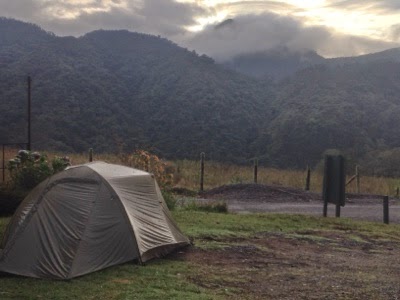 As we go to sleep, fireflies start to flow and dance among the dense, damp jungle foliage.

April 22nd
We wake up early to the sound of birds singing. How wonderful it was to sleep somewhere where it actually gets cold at night! Carlos unfortunately is leaving today for his time off, but he leaves us his key so that we can store our bikes safely while we go out to hike. (Not that we're very worried about them out here.) We say goodbye, then head out. We spend the whole day hiking a little over 4 kms, because we are moving so slowly. There are just too many birds to see! Over the course of the day we see 18 new species (check out the bird list) including several three-wattled bellbirds and elusive resplendent quetzals! The trail is quite beautiful as well. At first we walk through farmland. (I know- it's odd that farmland is part of this national park but the farms were there before the park and the government couldn't kick these people out. Plus the cut in the woods makes for good birdwatching!) 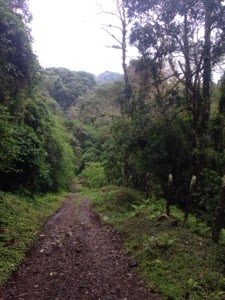 Then we enter denser forest, following, and occasionally crossing clear-flowing rivers and streams. We return hungry and tired, and so happy that we made the mistake of coming here and didn't end up slogging to the top of the volcano today.

A special moment (if you like birds):
The forest is densely green on either side of us, and somewhere in the greenery a thrush is singing its ethereal song. As we squelch through the mud, we try to listen closely for the sound of the quetzal. Perhaps if we hear one we'll be able to find it. Then, suddenly we spot a large green bird soaring through the trees ahead of us. That long tail is unmistakable- it's a quetzal! It stops, I see it! It's perched on a tree right next to the trail. 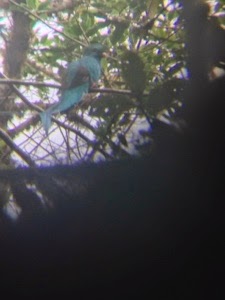 iPhone + binoculars = quetzal!
We scramble to get a good look at him, but he ends up sitting there for a while and just letting us observe.  The feathers on this bird are so brilliantly colored that they shine like polished gems, stark against the duller green foliage. The long tail coverts blow gracefully in the wind and look rather like the trail to a fancy gown. He sits, slowly moving his head back and forth. Then suddenly, he's in the air again and vanishes instantly, back into the canopy of green.
We feel lucky to have shared some time with this magnificent bird, free and wild in its natural habitat.

April 23rd, A day conducted at high speed.
It's raining when wake up but slowly clears as we get ready to go. Too soon, it's time to say goodbye to our mountain home; we hop on our bikes and head downhill. The way down goes considerably faster than the way up. In fact we have to stop several times to let our rims cool down! In Boquete we stop only briefly to fill up water and mail some postcards, then it's time for another 35kms or so of downhill back to David. The road is perfect- just the right grade that you don't have to hit the brakes, and you're still going exhilaratingly fast.
Back in David we attempt to find a vegetarian restaurant recommended by our guide, but can't find it and end up settling on large plates of rice and lentils from a slightly sketchy looking cafeteria instead. Then, on to the bus station. We have decided to take a bus from David to Santiago because several other cyclists that we met on the road and recent blogs have informed us of the awful and dangerous 200km long construction zone between these two places. 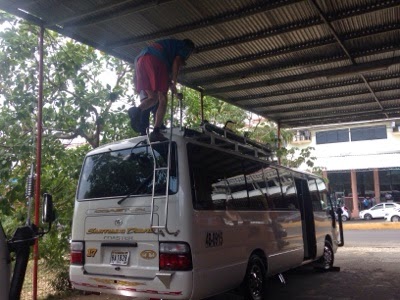 Danny loading the bikes on top of the bus.
Driving through it, I'm certainly glad we took the bus. There is no shoulder, just loose gravel, machinery or piles of rocks. The road is in various stages of construction, ranging from new pavement to giant holes in the road. Three things I observe seem to convey the state of things.
1) A worker, hammering in a stake with a large black mallet, stops as the head of the mallet falls off.
2) A worker attempts to throw a can of spray paint to others on top of a very large scaffolding... And misses.
3) A sign: "Tramo en Construction" knocked over with tire marks on it.
Of course, there clearly was a lot of good work getting done as well. The much expanded road that will be completed at some point in the future will certainly be a lot nicer than the current one, and probably even good for cycling.
The bus ride itself isn't too uncomfortable. The driver plays music so loudly that you have the feeling of being in a dance club, and accelerates to the point at which it sounds like the vehicle is about to take off. But, there is air conditioning! And really, nothing else besides that matters.
Arriving in Santiago goes better than I ever could have expected. The fire station is a block away from the bus station and the guys there are happy to let us camp. They show us the bathroom, shower, and give us a huge mango and giant plates of rice for dinner! The station has wifi, and also happens to be conveniently across from a large super market and hardware store. I wish every city were this easy.

Email ThisBlogThis!Share to TwitterShare to FacebookShare to Pinterest
Labels: Panama