Monday, October 6th
Goodbye Lava Beds
Our first stop of the day is the Visitor's center where we check out some of the exhibits they have. There's info on the native people who once lived here and used the tule grasses to make beautiful baskets, a story on J.D. Howard, who was the first white guy to discover most of the caves at Lava Beds, a map showing all the major lava flows in the area, and some pumice rock floating in water. All is well done and educational. We say goodbye to our new friend Tiffany and head off down the road.  Thanks again to the whole crew at Lava Beds for a fantastic potluck, good stories and conversation. Most importantly, Amy, it was so good to see you!!
Before leaving the park we visit one last cave- Valentine Cave.  This cave was created by a different, much younger lava flow than the caves we explored yesterday. Right as you walk in there's a  huge pillar with archways heading to passageways on both sides. 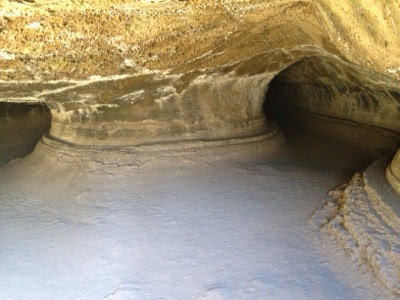 All around this chamber are benches or rock formed from different levels of lava flows that came through here. I feel like we have just entered a cathedral! The cave is very tall, open and smooth.The best part is that there are more hydrophobic bacteria.  There are 12 different species of these little guys in these caves and they come in green, silver and orange.  Since tiny water droplets collect on them, when they are hit by light they sparkle, and it looks like the cave walls are covered in tiny jewels.
After this cave, we bike off of Medicine Lake Shield Volcano (the big guy responsible for all these lava tubes). Most of the rest of the day we spend biking through National Forest. None of the roads are too busy, so we can chat and enjoy the good weather. After 50 miles or so, forest melds back into farmland and we reach the town of Bieber. (no relation to Justin Bieber- although fans have been seen driving out to take pictures with the sign.) The town is so cute that we decide to spend the night in their well-maintained park.

Tuesday, October 7th
We've been on the road for 4 months today!
Danny has a flat tire first thing this morning.  Never a fun way to start the day. All morning we bike on the 299, which has a nice shoulder on the flat sections, but not on the hills. There's not a ton of traffic, but unfortunately most of the traffic is composed of large trucks filled with logs or bales of hay. We get off the road every time one passes. Riding is rather stressful. Early afternoon we turn onto 89, but truck traffic is bad here as well.  There was a recent forest fire in this area and the logging companies are taking full advantage by hauling load after load of logs out of the blackened forest.
Mid afternoon we stop at an RV park to get water and end up treating ourselves to giant cookies and ice cream.  It's been a tiring day, always having to be on the lookout for traffic.
Soon after entering Lassen National Forest we see a sign for Subway Cave.  This cave is just immense; it looks like a subway could easily run through it. 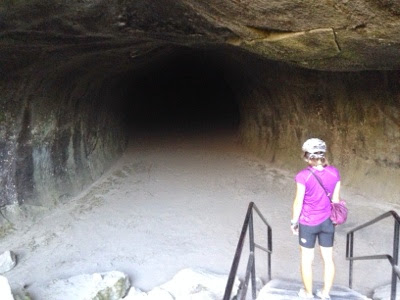 Little plaques inside the cave provide information on its features. We see a little cul-de-sac where the lava formed a sort of eddy, rock benches, and mini volcanos where lava oozed up through the floor.
After the cave we begin to bike up towards Lassen National Park.  Thankfully, there is very little traffic, and our road follows a lovely stream. We camp at a picnic area off the side of the road.

Wednesday, October 8th
Lassen Volcanic!
The day starts out chilly, but with less traffic.  The first 10 miles goes slowly, because we are climbing up to Eskimo Hill Summit.  The road only takes a downward turn right before the park entrance.  Inside the entrance gate we stop at the visitor's center. Here we talk to an amusing ranger who recommends trails to hike and complains to us, rather unprofessionally, about tourists who do stupid things in the park. We also find a screen showing recent seismic activity in the area - there's been a lot - and a beautiful display of photographs showing the 1915 eruption of Lassen Volcano.  These photos were taken by B. F. Loomis, an early explorer and photographer who helped in the creation of this park.
Since we're a bit low on food we also make a stop at the nearby convenience store.  They have great selection including hummus and vegetarian chili!
Late morning, we set off again down the park road. It is beautiful and quiet. 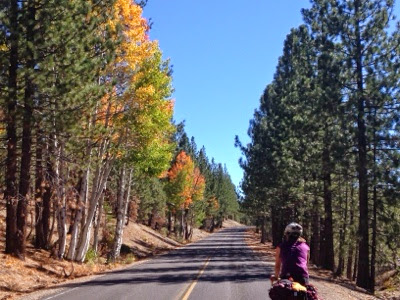 We climb up though the forest, then coast down, then up and down again.  Along the way we stop to see "hot rock" a boulder found by Loomis and his friends.  Apparently 40 hours after the Mt. Lassen eruption it was still steaming in a river!
We stop for lunch at Summit Lake (which form what I can tell isn't as the summit of anything). It's a lovely alpine lake reminiscent of Jenks Lake at High Trails. Refueled, we continue to King's Creek, a mossy, bubbling creek that winds its way through meadows yellow with autumn. Here we hike a flat trail through the forest to Cold Boiling Lake which we've been told bubbles from oxygen and nitrogen being released from underneath, but isn't actually boiling. The lake is a bit of a disappointment; none of it is boiling. All we find is a small muddy puddle bubbling off to the side. Oh well, it was a nice walk.
Back on our bikes we begin a switchbacking 4-mile climb to the highest point on the road. This pass marks the highest road we've biked so far on the trip- 8,511ft! 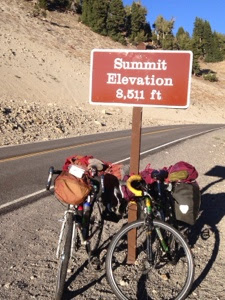 It's cold and windy up top so we descend quickly to the trailhead for a hydrothermal area known as Bumpass Hell.  Why the name? The guy who discovered this area had the last name of Bumpass. He happened to step on a thin piece of crusty ground that gave way and burnt his leg in 200+ degree water.  He is quoted as saying "the descent to hell is quicker than I thought."
Our hike brings us to the edge of a steaming basin. We can hear the largest fumarole (steam vent) from a ways away.  It's like a giant teapot telling us the water is ready. In the basin we walk on a boardwalk and are surrounded by a cracked landscape streaked in white, red, orange and even green from minerals and chemical processes happening to the rocks. 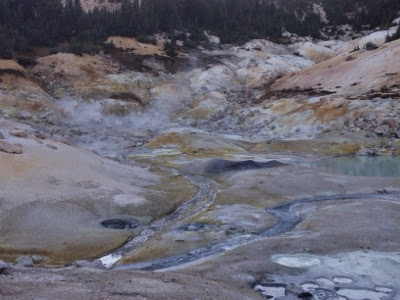 The smell of sulfur is thick in the air. We see several large streaming fumaroles, many milky blue-brown pool bubbling and boiling, and warm, viscous rivers. The pools are all various temperatures, but they're all superheated! One of my favorites is a pool where iron rich water from underground is mixing with some of the sulfurous water and forming pyrite- otherwise known as fool'd gold. The whole pool is bubbling silver. There are more than 75 fumaroles, boiling pools, and mudpots (a stage in between steaming vent and pool) in this small area. Cool stuff! 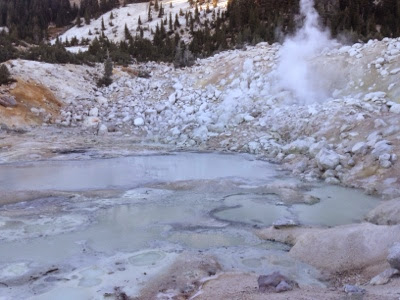 On our hike back we see the surrounding mountains illuminated in the beautiful hazer of sunset, orange, yellow and green fading into blue. Ahead of us are ragged peaks, remnants of an ancient volcano that blew its top. The sun melts over them like warm butter. 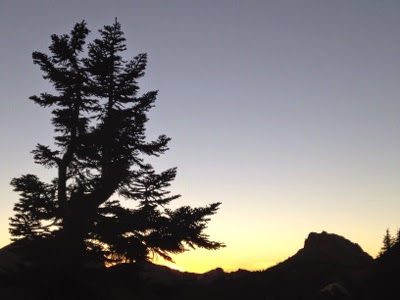 Back at our bikes, it's already getting dark and chilly. We set up camp at a picnic area across the road.  We'll be spending a beautiful, but frigid night at 8,000ft.

Thursday, October 9th
Hiking and biking.
Our day starts with a spectacular 6 mile downhill to the south-end park visitors center. On the way we pass another small hydrothermal area known as Sulphur Works.  This place got its name from the lodge that used to be here before the establishment of the park.  The guy who owned it created a steam room with baths warmed by the vents and also created medicine from the sulfurous chemicals.  Not sure what sort of medicine he made, but a hot pool would sure be nice on a cold morning like today!
The visitors center is well done, but we don't stay long because we're excited to start our hike.  The Lassen Peak trail is closed for renovation, so we decided to hike the second tallest peak in the park: Brokeoff Mountain.  This is the same peak we saw the sun setting over yesterday, a jagged remnant of an ancient volcano. Our legs are a bit sore, but the hike is beautiful.  It takes us along a stream (where we saw an adorable wren), up through the forest, then out into the alpine where we have beautiful views of the valley below.  From the top we have a perfect view of Lassen Peak and the road we came down this morning and in this distance we can see Mt. Shasta, majestic and snowy as always.  In the other direction are valleys and forests; we try to pick out where our road will take us. 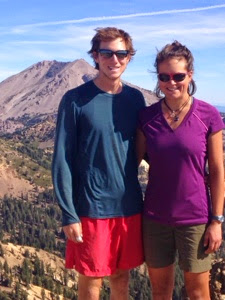 After hiking down we have lunch and get on the road. Thankfully for our legs, it's all downhill for the first 8 miles.  A pass marked on our map is only a tiny hill from this direction.  Wohoo!
The first town we come to is Child's Meadow.  It's not really a town; there's a campground, motel and small store.  At the store we purchase a few small provisions, including a large cheese pizza that the owner heats up for us in his oven and then slices and serves to us on tiny pizza plates. For whatever reason, after a long time without pizza we started to crave it, and this was a perfect treat! The owner of the store is quite the character and tells us all about the 5 careers he's had.  He recommends that we learn how to drive a tractor and then we'll always have work. Good advice that we probably won't take him up on.
The rest of the afternoon we bike through rolling green forest and make excellent time with a bit of a tailwind.  Our day comes to an end when one of Danny's cables breaks. No worries, he fixed it without problem and now we're watching the sun set over Lake Almanor.