We got on the road early this morning.  It was still cool as we biked through the west side of the flat Central Valley.  Big industrial farm trucks and equipment passed us frequently but gave us a lot of space.  We soon turned onto highway 152, a busy multi-lane highway.  It was the only road over this section of the mountains.  There was a lot of traffic moving fast, but there were no other options.  Even with all the traffic, highways aren't all bad: they are moderately graded, sometimes all the cars passing create a contrived tailwind, and there is usually a big shoulder.  I say usually because this highway had a great shoulder... until we started to climb Pacheco Pass.  Our riding lane got smaller and smaller.  Finally we stopped, unable to ride any farther.  What to do?  We figured the shoulder would return as soon as the passing lane disappeared, and that would happen in a few miles, after the pass.  Maybe we could push our bikes up the center median until then.  It was worth a shot.  A break in traffic let us cross over to the center, and what we found surprised us.  A spillway, a shallow V of pavement, ran up the median.  It was a perfect bike path!  Cars and trucks had their lanes, and now we had ours.  It kept life interesting, too, not in the life-threatening trucks-passing-too-close kind of way, but with the abundance of gravel and trash, occasional large grates in the middle of the path, and the possibility that we were doing something illegal.  I'm still not sure. 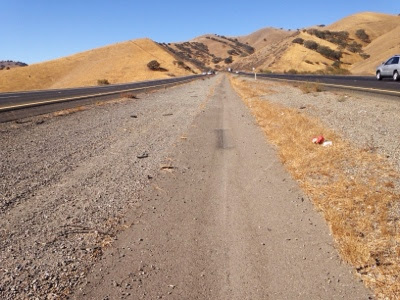 We followed our makeshift bike path to the top of the pass where the giant shoulder returned as predicted.  The long descent was bliss on the hot day until Tam got a flat tire.  Good thing, though, because as she was fixing it, she noticed her rack had come off the frame.  Really the dropout where the frame attaches had snapped off, leaving the weighted rack unsupported.  Yikes.  We zip-tied the rack back to the frame and proceeded down the road. 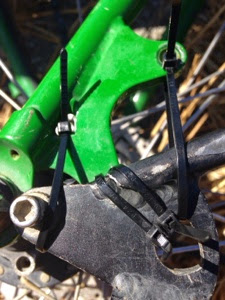 A few miles ahead was Casa de Fruta, which in Spanish means House of Vegetables, or something like that.  Inside we found boatloads of fresh fruit, nuts, and treats, all from the nextdoor Central Valley.  It took much restraint not to buy everything.  We did enjoy some honeydew, the sweetest strawberries I've ever had, and a flavorful orange. 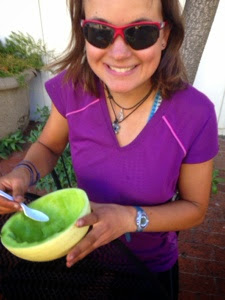 The wind really picked up after we left Casa de Fruta, and we spent the next few hours battling it and moving very slowly.  We were spent by the time we turned onto a back road to Salinas.
But we continued to push on up a big hill.  At the top, the light was fading.  It wasn't even 6 yet!  We saw the Pacific Ocean for the first time since Alaska, the sun displaying pink on the horizon, and though we were energized by the view, we didn't make it to Salinas before dark.  Headlamps on, we headed to the house of a warmshowers host who agreed to let us pitch our tent in their backyard.
Posted by Danny at 10:21 PM