We began today by crossing into California, our sixth and last U.S. State of this journey.  Shasta keeps getting closer.  We stopped for awhile at Tule Lake National Wildlife Refuge, where we had a good time chasing a marsh wren and seeing all kinds of birds. 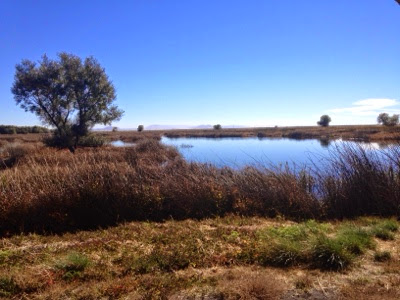 Then around noon we passed into Lava Beds National Monument.  The landscape became other-planetary as we passed through huge lava flows. 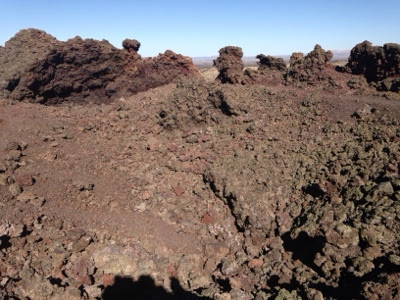 From informational signs we found out that we were actually climbing up the source of this lava, the largest shield volcano in California by surface area and volume.  Shasta is much higher but not nearly as massive.  The temperature was in the high 80s and no shade to be found; I felt at times like I was actually in the volcano.
We visited the Black Crater just after lunch, which was exactly as it sounds yet still interesting.  The igneous rock looked like brownie mix! 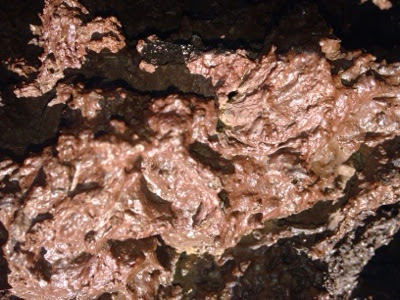 Lava Beds National Monument, however, is not known for its hiking.  It's not really known at all, but the main attraction is the caves: over 800 have been discovered within the park, about 20 of which are developed.  We pulled into a turnout to read some informational signs and began talking with two park employees, Tiffany and Andrew.  Turns out Tamara had talked with Tiffany a few days before on the phone about road conditions in the park.  They invited us along on their caving expedition, and we had an awesome time exploring two short caves.  They had both been in these specific ones before (Andrew's title is "cave rover"), so it was like having our own personal guides!
After that we headed to the visitor center, where, unbeknownst to her, one of Tam's friends from college was working!  It is a small world. We also met Jesse, who invited us to come over later to the staff pot luck dinner and his birthday celebration.  We were happy to oblige, but not before seeing more caves!  We set out on the "cave loop," a 2-mile long road with a number of developed caves. 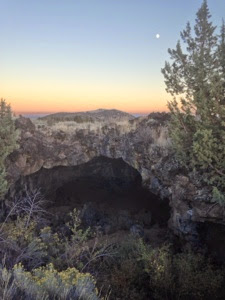 The formations were incredible; all the caves are lava tubes, some with smooth, braided floors, others with piles of rocks we had to navigate.  Some had big caverns, others were so narrow we had to crawl. 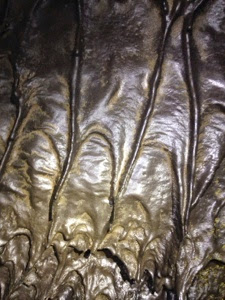 Most beautiful were the hydrophobic bacteria in green mats on the ceiling of Hopkins Chocolate cave.  They shimmered in the light, making the dark walls appear to be covered in jewels.
We even saw a few bats!  And in all of them, when we turned off our lights, the darkness was complete.  Our eyes couldn't adjust, because there was no light to adjust to.  It's obvious when you think about it that any cave is the darkest place on earth, yet it is an experience to stand still in the cool, jet black silence of the underground.
As night fell we enjoyed a wonderful dinner with all the friendly staff of this amazing place.  They truly welcomed us; we felt right at home.
Posted by Danny at 12:20 AM