Taking off from Anchorage on the last of our flights to Deadhorse, we could hardly contain our excitement. Or at least I was excited; Tam was sleeping, again.  I wish I had her ability to sleep anywhere!  Anyway, I made sure to nudge her whenever something really interesting presented itself below us, through the airplane windows.  The main attraction of the flight was Mt. McKinley poking its head through the clouds, along with its baby siblings Mts. Foraker and Hunter. 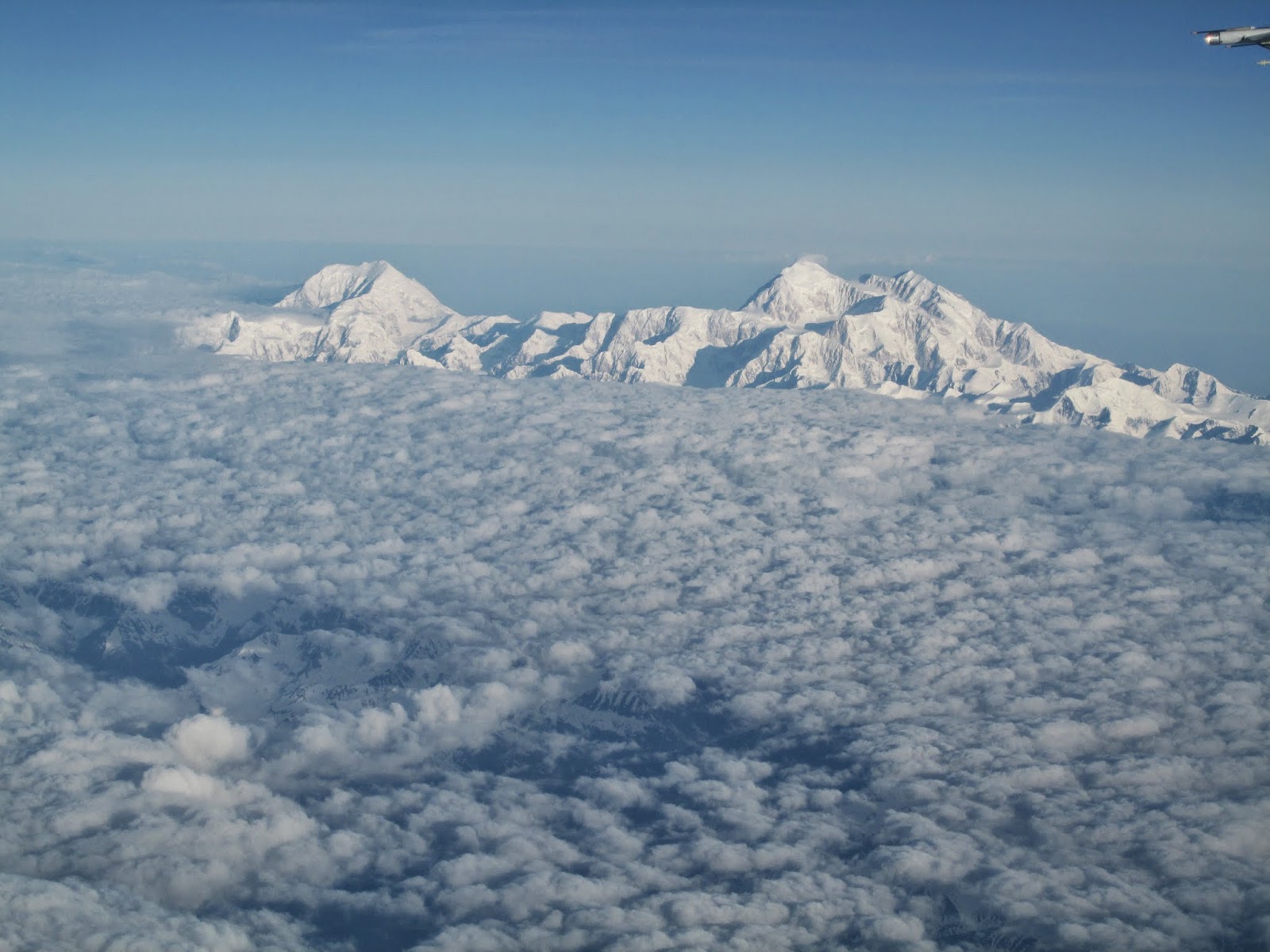 We ogled at those three mountains for almost the whole flight into Fairbanks, and after a short stop, we were back in the air.  Breaks in the cloud cover allowed us glimpses at the Brooks Range and the tundra below; the amount of snow was intimidating.  I thought I could see the road, paralleled by the Trans-Alaska Pipeline, below, and it appeared to be a dark line on the snowy tundra.  We couldn't help but wonder what we had gotten ourselves into.  Then the pilot told us on the intercom that it was snowing and 31 degrees in Deadhorse.  Gulp.

No matter.  The bikes arrived, and while occupying one of the two rooms in the Deadhorse airport to unpack and put the bikes together, we discovered that we weren't the only people crazy enough to be starting a bike tour that day.  We enjoyed for a few hours the company of Keith, a professor and 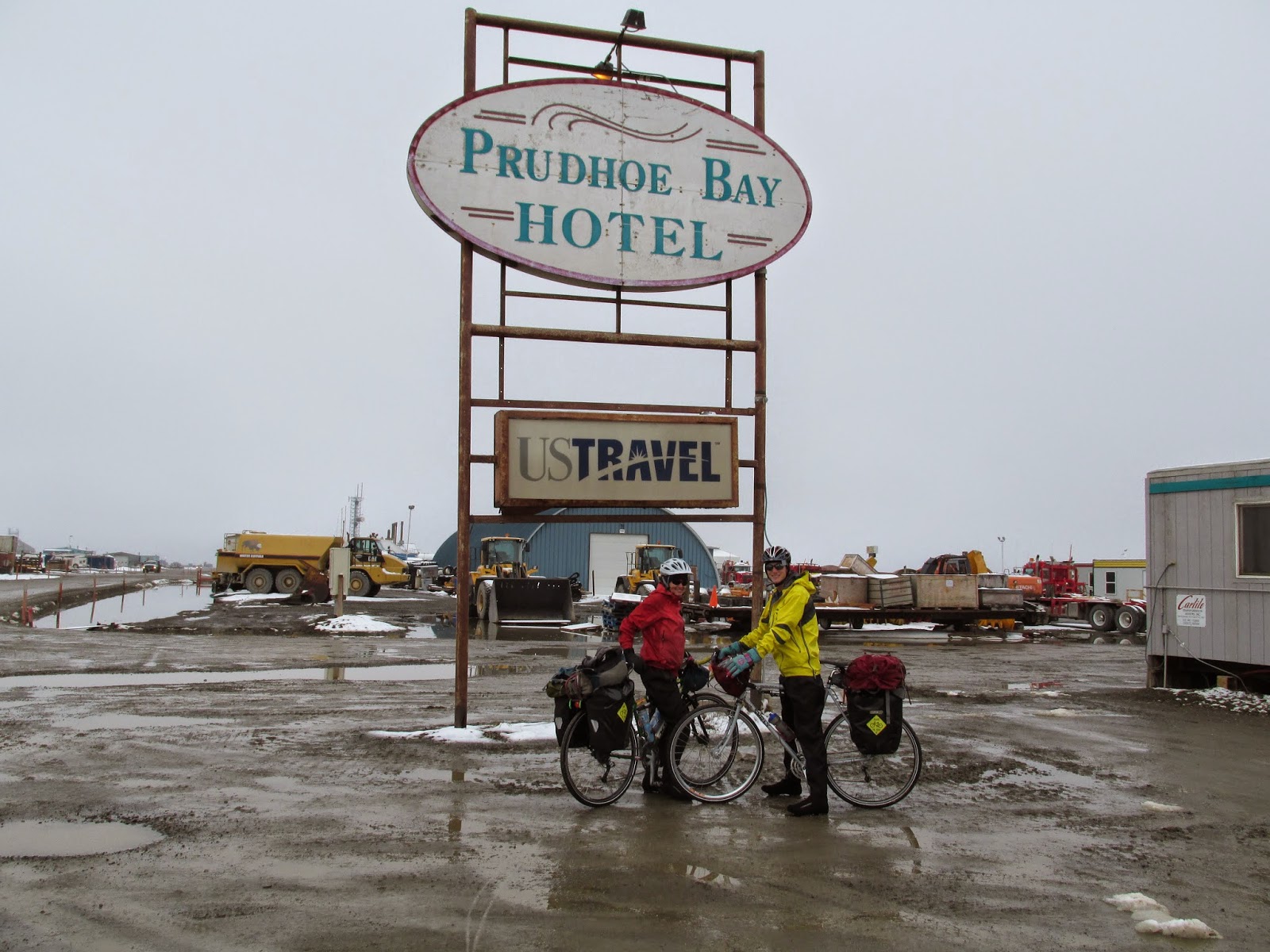 mathematician who would be biking to El Paso, and Madeline, a grad student who would be biking to Fairbanks.  After packing, we all headed outside.  Clearly, seeing bicycle tourists is not an everyday occurrence in Deadhorse, because, while still in the parking lot, we were asked numerous times from where we had come.  "Right there!" we would say, pointing to the airport a few hundred feet away.

Deadhorse, located in Prudhoe Bay, Alaska, is not your typical town.  It exists for the purpose of the operation of the Prudhoe Bay Oil Field, which, according to Wikipedia, provides more than double the amount of oil than the next largest U.S. field, in Texas.  Still, the oil is finite.  12 billion of the projected 16 billion potential barrels have already been extracted, and production is on the decline.  I would surmise that the Prudhoe Bay Oil Field's decline is a major reason for the controversy over drilling in the Arctic National Wildlife Refuge, the pristine wilderness to the southeast of Prudhoe

Bay.  Regardless of my stance on oil drilling, at this moment I was thankful for it, because the road that we would be taking south, the Dalton Highway, was built in 1974 for the sole purpose of servicing Deadhorse, and was opened to regular joes like us in 1996.  Unfortunately, that road doesn't go all the way to the Arctic Ocean unless you work for an oil company or you pay a tourist company a bunch of money to take you there.  So we left the airport and, instead of going to the beach, headed for the General Store. 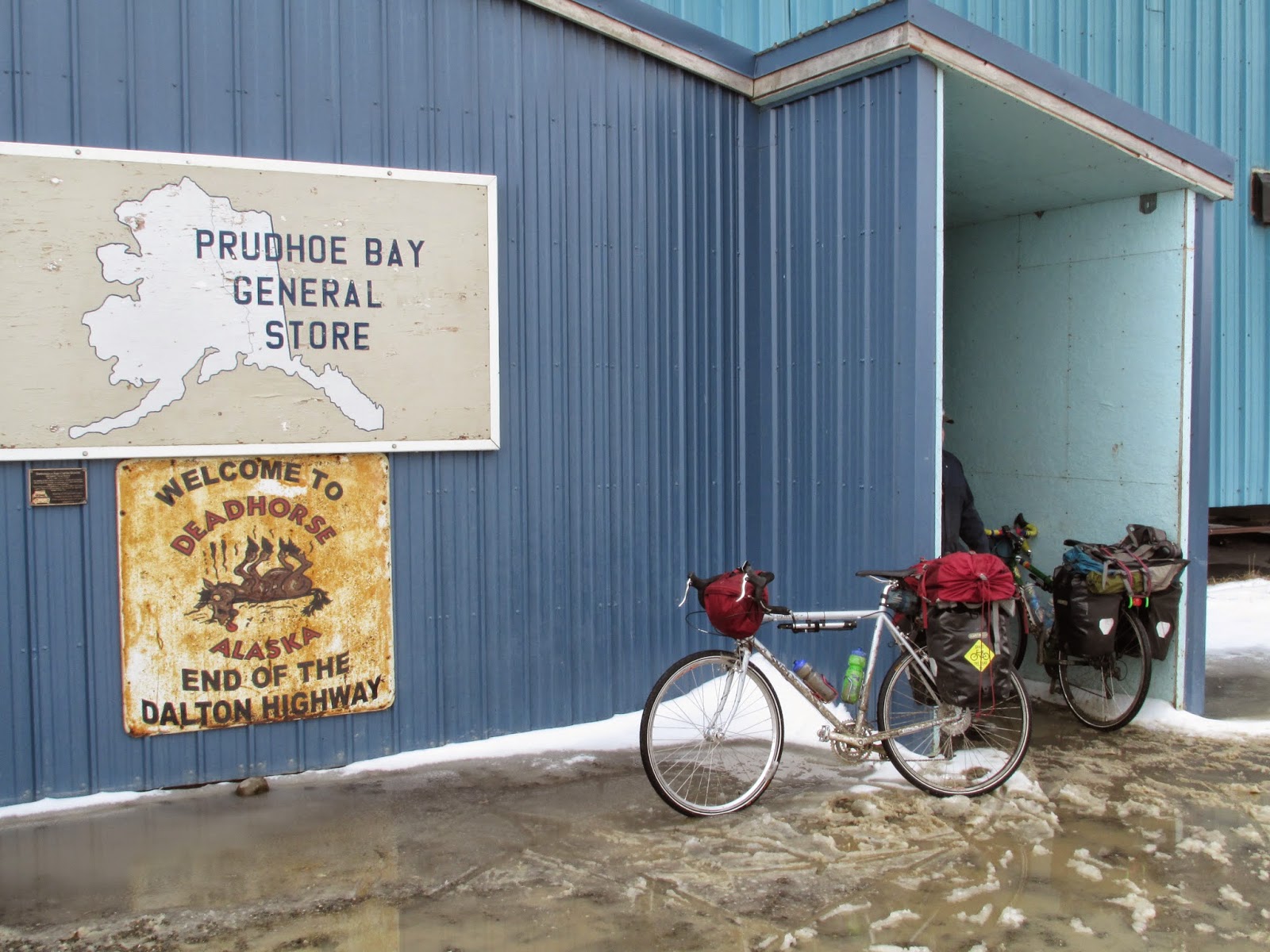 I'm not sure why we went to the General Store, but Keith wanted to go so we followed him and toured the town.  There are tons of connecting streets that we had no business going down (I had no interest in oil drilling), so the store was a bit tough to find.
We made it there eventually, filled up on water, poked around the (surprisingly) impressive selection, then headed out.  Keith stayed behind to wait for the post office to open, so Tam and I biked out of town with Madeline.  The snow, thankfully, had stopped, but the Dalton Highway was a mucky, muddy, mushy, mire.  By mile twenty, my legs felt just as mushy as the road.  Madeline seemed to be doing better, because she rode ahead and was out of sight by maybe mile four.  She had mileage goals for each day and less flexibility with her shorter tour.  We, on the other hand, preferred to stop every few minutes to look at birds.

With its abundance of water and light, and few humans around to mess things up, the Arctic tundra is a prime nesting spot for birds.  Many species migrate thousands of miles to nest there each summer; each little pool is a prime piece of real estate.  Thus you can understand how excited I was to be there!  I tried not to stop too often, but they were EVERYWHERE.  A number of them were new species for Tam and me, and I tried to remember them as well as I could so I could research them and write them down at the end of the day.  I'm not one for keeping bird lists, but I decided after our last bike tour, on which I saw three new species, "life birds," if you will, that I would keep a comprehensive list of the birds I see for our whole trip.  If you're interested, that list now has its own page on the homepage of this blog.  I ended up seeing over 20 species that first day, and I'm sure I would have recorded many more had I been more knowledgeable about the area's birds.

Back to biking, that long first day.  The road dried out a little bit as we biked, so some sections were better than others.  Still, at the end of the day, our bikes and the outside of everything attached to them were caked with mud.  Anything less wouldn't have been genuine North Slope Alaska, so, even though our bikes were covered in the stuff, we weren't too bothered by the grime.  We called it quits after 36 miles and prepared our dinner on a little side road.  As the couscous was hydrating, Keith, who we hadn't seen since Deadhorse, biked up and decided to join us in stopping for the day (there is no night).  We set up camp together on a gravel bar about a quarter mile off the main road.  In spite of the large wolf prints less than 50 feet from our tents, it was a great campsite and I slept soundly.  A smooth beginning to the journey.