As hard as it was to leave Anna and Andrew's place for good, we had to get back on the road.  So we said our goodbyes, packed up, and headed to the supermarket to get some food.  Even though the bike to our next destination, Denali, would only take two days, we bought food for seven days to avoid paying higher prices near the park entrance.  Thanks to the unexpectedly expansive bulk section at Fred Meyer, all of it came to only $76!  We were pleasantly surprised; that's just over $5 per person per day, and we eat a lot.  I've always had an appetite, but now I'm pretty much always hungry, even after finishing a significant meal.  In this respect, I like bike touring much more than backpacking; I can carry more food!  We realized while at the supermarket around 1 pm that our nourishment for the day had consisted of oatmeal and an Emergen-C packet (thank you Lisa and Oreo!).  It's never a good idea to shop on an empty stomach, so we settled on the most yummy and economic solution: blueberry muffins.  520 calories per dollar, oh yeah.  Tam didn't want one of hers, and I very much enjoyed my three. Since we'll be passing more towns now, we're going to supplement our regular food with fruits and veggies whenever we have a chance.  Many thanks to Andie for sending dried mango and that fruit and nut mix; they are delicious!

We had been warned by some folks in Fairbanks about the hilly road to Nenana, about 50 miles from Fairbanks, so we were expecting a tough ride.  The worst, they said, was the hill out of Ester, just out of town.  But when we reached that hill, and all the others, we realized that the hills on the Dalton Highway had prepared us well.  Yes, the hill from Ester was long, but it was not continuous, nor all that steep, nor gravel, nor was it followed by twenty more just like it.  Moreover, the weather was perfect.  Low 60s, slightly breezy, and no mosquitoes!  We had the time of our lives in shorts and t-shirts.  Upon arrival at the Tanana River (we found the site Andrew and John recommended - thanks guys), we built a small fire to keep the bugs away, had a great dinner and dessert, and set up the tent, folding the rain fly up off the foot so we could see the river.  As I write this, the midnight sun is turning the light amber, and a beaver is swimming by just a few feet away and slapping its tail at us.  'Tis a fine night to be in a tent on a riverbank in Alaska. 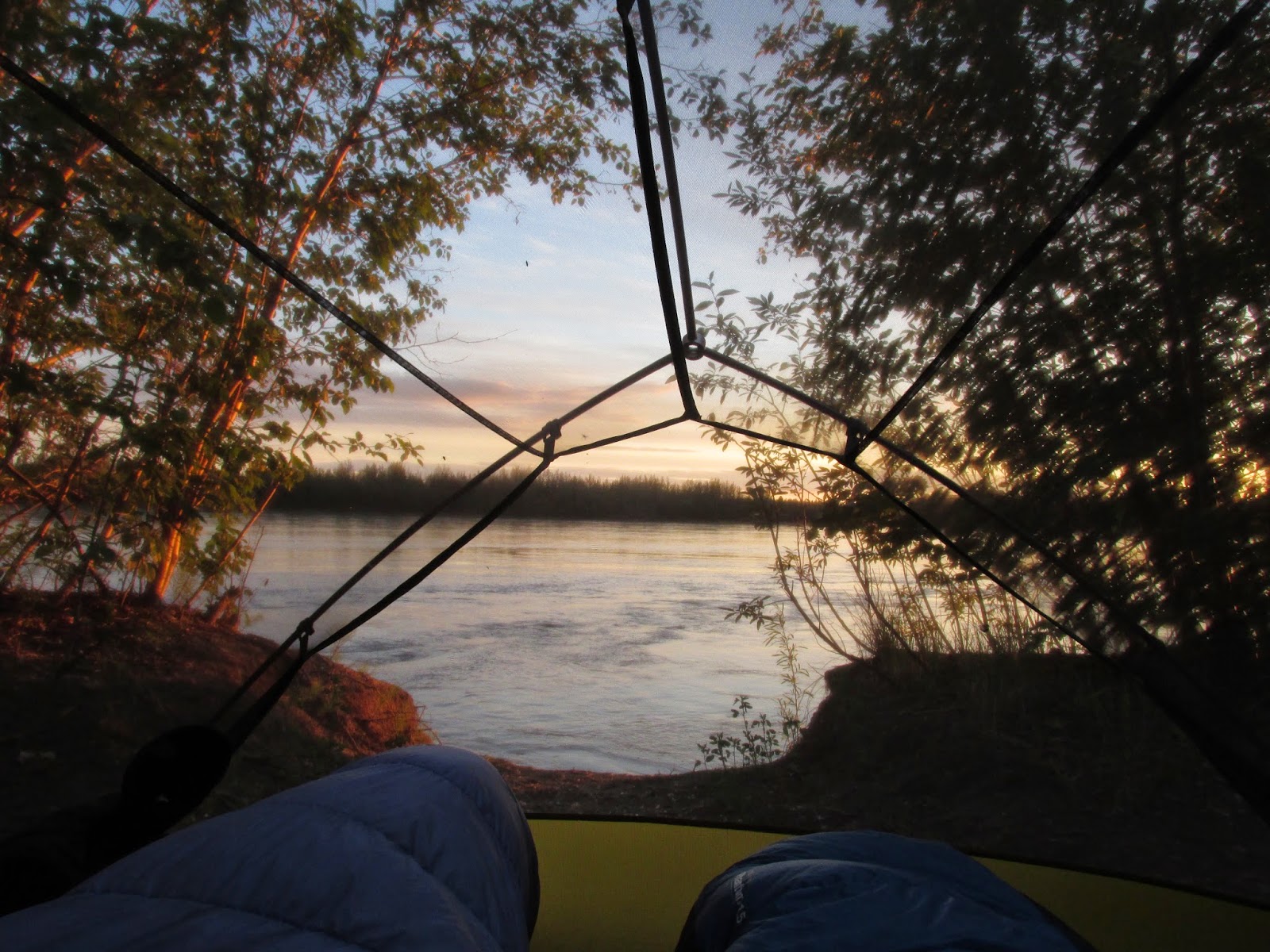