Aaand we're on the road, all four of us together! Funny how life can change so quickly when you leave yourself open to spontaneity. Pavement turns to dusty dirt as we head up around Volcan Villarrica, and seeing no need to push ourselves hard on Chris and Hannah's first cycling day, we stop after a few hours of slow, steady climbing at a nice spot by a river.

As we're preparing dinner, a car going by sees us and stops. I (Danny) walk out to the road to chat. A lady wearing a blazer from the 1970s slams her door, having gone from zero to irate in an instant. "You're on our land!" she screams. "There are animals coming; you'll block their access to the river! And you're killing the grass! Leave immediately or we'll call the police!" All this accompanied by wild, exaggerated gesticulations which only add to the show. Her temper is beyond lost, like that of an inconsolable toddler, and she's wrong; there's no river access near our tents and we're not on the grass. But we are on their land. I politely mention that we'll be leaving immediately, which only makes her angrier. Clearly she wants a reaction, and as she starts yelling again, her husband calls her off. They move on, and we shuttle our tents 50 feet to the other side of the road. We're laughing at the ridiculousness of the whole situation but are still a little bit shaken up, simply because this woman was so insanely angry over such a seemingly insignificant issue. I don't want to cause anyone such stress.

After yesterday's dusty ride and private property altercation, we are eager to come across the first signs for Villarrica National Park. Even better, our fears that the road through the park had been "improved" are immediately dispelled. The top few kilometers are still considered intransitable, meaning that, although we have to push a bit up some steep sections, there is plenty of fun, technical riding with no traffic! A perfect cycling route through shady, old-growth, monkey puzzle tree forest, aka food for the soul. 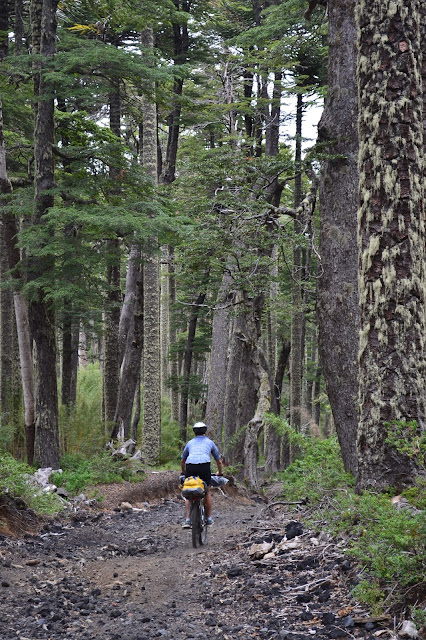 Unfortunately the descent on the other side passes by some hot springs, and we quickly learn that Chileans on summer vacation love their hot springs. In fact, all of Santiago seems to be here showering us with dust as they speed by. We turn onto pavement at Coñaripe and speed out of town. At least on pavement we won't be getting asthma from the dust.

A few flat, paved kilometers take us to a bridge, and we decide to stop for the night. Hannah's knee has been bothering her since she took a tumble this morning, and there's no reason to push it. Especially because some friendly ladies are selling Chile's version of fried dough right next to our secret campsite! We can't resist trying a few calzones rotos and sopaipillas: delicious sugary, fried appetizers to dinner. Even better is our campsite. Although we are surrounded by private property, we traverse a small offshoot of a raging river and find a flat, untouched island perfect for a good night's rest. We all head to the river to wash off, and as Chris sits down in the glacial water with an agonized shout, a car stops on the nearby bridge, a window rolls down, and a smartphone camera comes out. Tourists, huh? There's no escaping them.


Our pavement ends soon the next morning, so we spend some more time acquiring free layers of dirt sunscreen from passing cars. At least we have a nice lunch spot...

And as we're finishing up eating, who comes by but Dan and Gina! They headed out of Pucon when we met up with Chris and Hannah. I am so excited to see us all roll off together, one big biker gang rolling six deep.


In the afternoon we reach our destination, Choshuenco, which is only really a destination because it marks the beginning of a trail. No traffic there, surely! Apparently there's no trail either, say multiple sources in town, but we decide to give it a shot anyway. The next morning sees us on a barely visible track ripping our way through thickets of blackberries, the spiky devils of the plant world. Somewhat demoralized by how impassable it is, we all powwow for a bit and decide that it's not worth continuing. I might have sacrificed my epidermis for ripe blackberries, but unripe, no way!


With no better route presenting itself in Chile and the traffic becoming unbearable (well, there was one route on trails, but it was too illegal), we decide to head east through an interesting border crossing requiring a ferry. Although all the ferries are booked when we arrive, because we have bikes, we are somehow prioritized over the many backpackers yearning for a spot. Just a few hours into our supposed all-day wait, and there we are, boating east towards Argentina!


Chile's border processes are organized and efficient, the guards businesslike, and we're happy to take advantage of the free wi-fi. On the contrary, Argentina's processes take ages. But we hardly notice because we're having a ball laughing and taking pictures with the border guards. I look out the window at one point and see one of the officials taking a spin on Gina's fat tire bike. For all we love about developed Chile, this unguarded, relaxed moment would never happen there (or in the US, France, Japan, etc). This moment, whatever it is, is the price of progress.


Though we almost get run over by an out-of-control VW hatchback, we cruise happily the next afternoon into the relaxed town of San Martin de los Andes, the northern terminus of the Ruta de los Siete Lagos (Route of Seven Lakes), one of the most popular and scenic routes anywhere in Argentina. Look for stories and photos in the next post!


Route Notes:
- Pucon to Coñaripe: Though the main road east out of Pucon is heavily trafficked, there is a bike path for a good ways. We headed south to Coñaripe through Villarrica National Park, a route praised highly and with route notes here. A few hundred meters of pushing are involved in the 4 km "intransitable" section, though I bet a strong rider on a light bike could ride all of it. Riding through the park was incredible - a smooth dirt track winding through dense, old-growth forest - but the 35 km to get there and the 25 or so on the other side were less enjoyable due to insane amounts of tourist traffic. Lots of washboard and dust. Outside of mid-summer (January and February) I would highly recommend this ride; during January and February, it still seems like the best option in the area. You can't escape the tourists.
Coñaripe is basically an extended strip mall with shops, restaurants, accommodation, and probably an ATM and internet somewhere... I don't know, we left as fast as we could. About 5 km east of town the road crosses the Rio Llancahue. On the right, just before the bridge, there's a small path leading down. Follow it for a few meters then cross the stream on your left to find a perfect island campsite.

- Coñaripe to Choshuenco: Ripio begins just after the Rio Llancahue and continues all the way until a few km before Choshuenco. As before, tons of traffic and dust. Choshuenco has shops, restaurants, accommodation, and internet: slow wi-fi that you can pay for or free time on the computers at the hexagonal building on the left as you enter town. No ATM.
The route from Enco to Riñihue along the southern shore of Lago Riñihue was followable, at least for a kilometer, but turned out to be too overgrown for us to pass. It also is apparently missing numerous large bridges, though none of the rivers appeared on the satellite imagery to be wide enough to be impassable.
There is another, more direct route south that goes straight up the mountainside and also apparently involves a lot of bushwhacking; for route info, find Raúl, the guy who charges for parking at the beach. He knows the area well, and his brother has GPS points. We met some backpackers doing that route, so it's probably easy enough to follow without losing the trail.

- Choshuenco to San Martin de los Andes (Argentina): All unpaved, dusty, and trafficked, although slightly fewer cars in the first Argentine kilometers. Neltume has all services except an ATM. Great camp spot by the river about 3 km after Neltume; look for a small road on your right. There are 2-4 ferries a day from Puerto Fuy depending on time of year and day of the week. Cost is 900 pesos (~US$1.30) per person and 4000 (~US$5.70) for each bike. Be aware, they fill up fast in the high season (January-March). Pedestrians have to book the day of - no reservations - and the office opens at 6 am. Tickets go fast, the guy told us, so probably be there at 5 to assure you will get a spot on the first ferry of the day. When we rolled up just after 7 am, all four departures of the day were completely sold out.
There is a free campsite 2 km off the road at Parque Nacional Lanín just after entering Argentina.
San Martin de los Andes is a nice town with a great supermarket, but prepare for very high prices. We happened to be there on a long weekend, so that certainly didn't help. 120-170 pesos (~US$9-12) per person to camp, 330 (~$US23) for a dorm in a hostel. We found the cheapest and quietest campsite by far, 25 pesos (~US$1.50) per person, located 6 km south of town and 100 meters down the road to Quila Quina on the right at the river.
Posted by Danny at 2:14 PM