Here´s the scene:
Capt. Jack´s rooftop bar.  Travelers are packed around the small tables, all seemingly in a daze, plugged mindlessly into their electronic devices. No one looks happy.
One beer-stained table in the corner however, is filled with 5 smiling people and a lot of laughter. This is where our trip begins.

Capt. Dani: Originally from Spain, he has worked on a sailboat running this same trip for 6 months, but this is his first trip as captain of his own ship. Small and agile like a monkey, he has a limited grasp on English. Nonetheless, he manages to be hilarious and positive at all times, mostly with the use of the words ¨Hi!¨ ¨C´mon!¨ and ¨Achooo!¨

Engineer Jonathan:  Originally from Barranquilla, Colombia, he´s a big strong guy with a friendly and easygoing demenor.  In charge of maintaining all the boat systems during our voyage.

Huyen: Originally from Vietnam, she´s a fellow bike tourist who loves to talk and share adventures.

John: Originally from Pensylvania, he has lived in Guatemala for 3 years and explored all over Central America. With a easygoing attitude, he´s basically impossible not to get along with. (John joined us on day 2 of the voyage.)

46 ft. Arctic Front.  Originally from the US, she is now ready for the tropics with new snorkel gear, big cushions for lounging above deck, a great kitchen, and a shower. 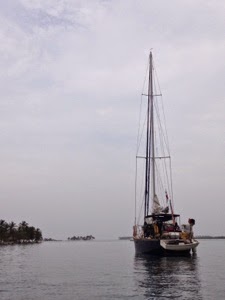 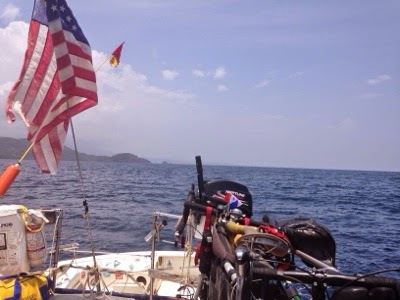 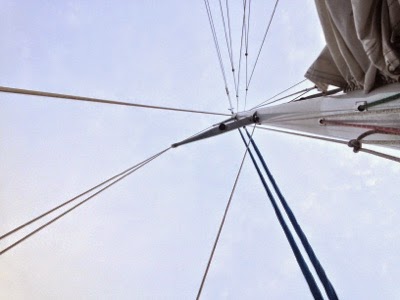 After meeting Capt. Dani and Jonathan, we go out to sleep on the boat with them.  Danny and I have a private room at the back with a huge double bed complete with foam mattress pad. Sweet! We´re excited to finally be on our way to South America.
The next morning we have to go back to shore to pick up bikes and last minute groceries. It´s a relaxed day. We sail a bit in the afternoon and anchor in the port of Porvenir for some swimming and reading time.

Overnight we sail to the San Blas Islands, aka. Tropical Paradise! Water so clear you can see down 40 feet, amazing reefs filled with brightly colored corals and fish, tiny islands with only white sand and palm trees, you get the picture. 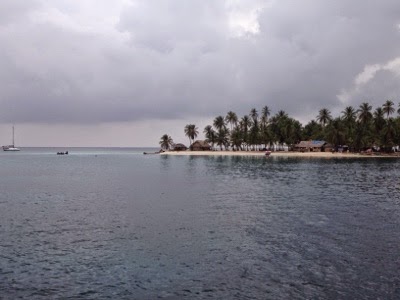 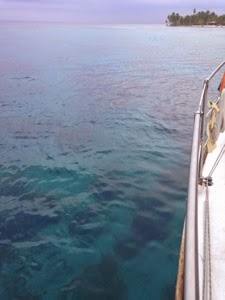 The water is so clear!

On our first day, our crew go off to border control in a small dugout canoe paddled by one of the local indigenous people, the Kuna. This may be the most unusual border we have crossed yet.  While they´re dealing with the logistics, we go snorkeling!
It´s basically impossible not to have a good time in these islands.  During our two days there, adventures included snorkeling around three different shipwrecks, playing volleyball against the tourists on another sailboat doing the same trip, and eating seafood paella made with freshly caught fish over a fire. Our captain is a superb cook. 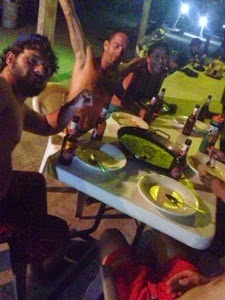 Jonathan and Dani at the Paella Fiesta

Too soon, it´s time to take to the open ocean.  We leave at midnight and when we´re awake the next morning there´s no sight of land, only big waves.  And, wait, dolphins! Suddenly a HUGE pod of dolphins has surrounded our boat, jumping and playing alongside us in the waves. We all forget about being seasick as we watch them.
When the dolphins leave, we resort to simply lying in the shade above deck and trying to sleep or relax.  In the rocking waves, it´s almost impossible to be below deck or focus on anything (like a book). Somehow, Capt. Dani is not seasick at all and is able to cook amazing meals for us in the swaying kitchen below.  We do our best to eat because the food is just so delicious.
We continue all day, the next night, the next day, the next night... There are problems with the motor and battery, so we sail most of the way and it takes longer than expected. But luckily the weather is nice, we have a full moon, and everyone remains positive on board. 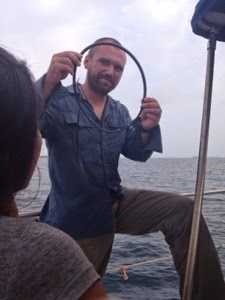 John with the broken engine belt.

At approximately 3am we arrive in the Islas del Rosario off the Colombian coast, but we can´t safely make a landing due to the surrounding reefs and our unreliable motor.  Instead we drift around a bit until a new character enters our story.  Meet Manuel, aka Captain America, former captain, boss of Dani and Jonathan, and bottomless pit of drinks and funny stories.
Manuel, his voice booming at a rather uncomfortable volume in the early morning, drags us into harbor with a motor boat, and helps us get things fixed up on the boat for the final sail to Cartagena. For the afternoon, we all jump overboard and go snorkeling.  There are more beautiful corals and fish and perfect white sand beaches to explore!
The following day we finally reach our destination of Cartegena, but due to border politics we don´t get our passports back before it is dark. We spend our afternoon ogling at the skyline of Cartagena and watching giant cranes load goods onto huge container ships. 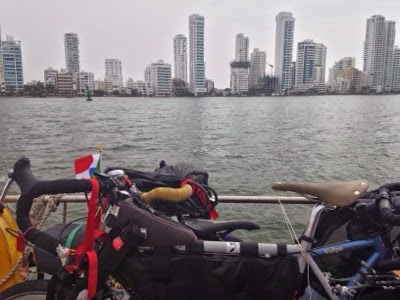 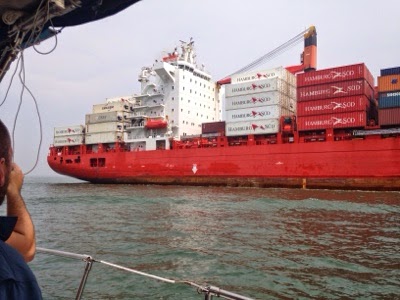 Look at that ship!

Thanks to all our new friends for all the laughs and an unforgettable maiden voyage on the Arctic Front! 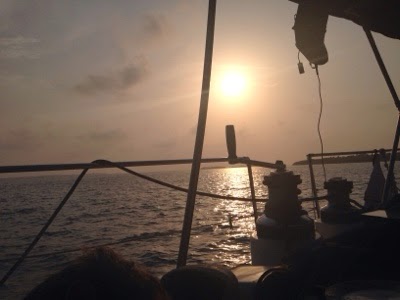