A little later than usual, due to the drumming of rain on the roof waking us then soothing us back to sleep, we found ourselves back on the saddles, pavement ahead and storm behind.  Straggling wisps of grayish clouds hung low over the ever-bigger mountains, accentuating the contours of the rumpled slopes beyond. 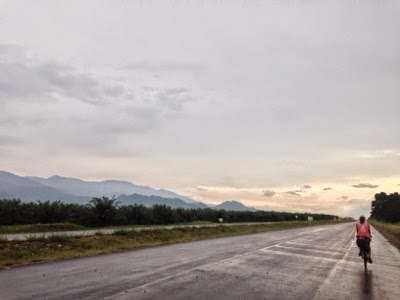 The morning was cool though still gelatinously muggy, and the construction from the last few days continued, meaning we still had more room to ride than we knew what to do with.  Riding on a closed road meant our smooth pavement wasn't groomed for travel,  punctuated at times by rolling mounds of dirt and open pipes, you know, just to keep things interesting.  I'll gladly walk around some pipes if we can avoid the trucks!  Soon, however, we didn't have a choice.  The road split, one way to Bogota and the other to Bucaramanga, and our bike lane turned into a steep, narrow, curving mountain road that sometimes looked like this: 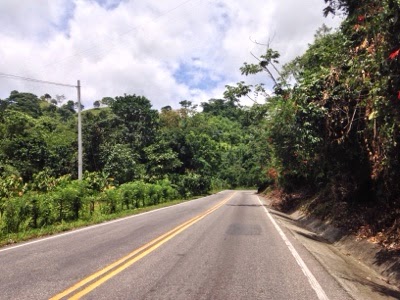 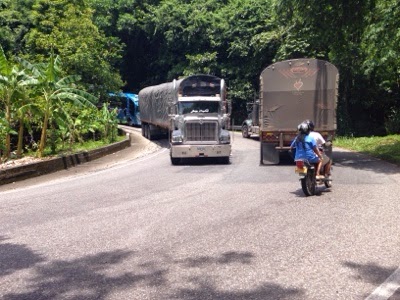 Climbing up bit by bit, up and down, up and down, we eventually arrived at the top, 2,500 feet, in the early afternoon.  The air was noticeably cooler here at the town of Limites, situated right on the line between the departments of Santander Norte and Santander.  Among a few small restaurants was a cheap hospedaje, and we chose to stay there.  While getting out our wallets to pay, however, we realized that we had only 12,000 pesos, roughly $5, which we would need for food the next day.  Embarrassed and apologizing profusely to the hotel manager, we asked if he might know of a place we could camp, and he immediately ran behind the hotel to his parents' house.  The parents, Javier and Elsa, welcomed us in like family, showing us a place to set up and making us some scrambled eggs with avocado.  Another son, Jhonatan, showed us around the farm in their backyard: five different varieties of bananas, four varieties of orange, numerous avocado trees, cacao, and a number of fruits we didn't know.  This is guama: 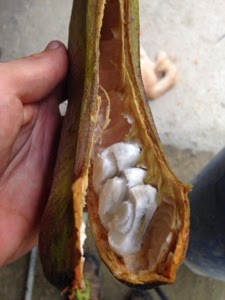 We had already eaten most of it when I took the picture. You eat the mushy white part and spit out the "almond" inside.

The family then offered a shower in one of the rooms of the hospedaje, and while you're at it, they said, "just go ahead and stay there!" We were set on sleeping in our tent, actually excited to do so in cool weather for the first time in awhile, but they insisted.  So we ended up in the hospedaje anyway.  Even better, we were able to meet this wonderful family and spend the night chatting and looking for ripe cacao fruits to extract the raw beans and suck out the flavor. 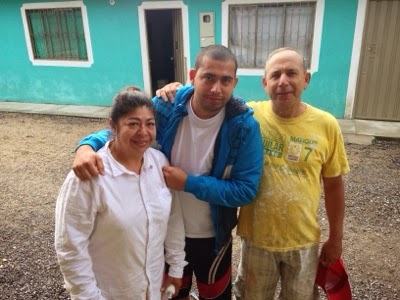 Buzzing with positivity from the influence of our wonderful new friends, we began the next day with almost 15 km, 10 miles, of descent.  Some thigh-burning climbs and more cool descents brought us to the outskirts of Bucaramanga, where we started our final climb up to the big city.  Usually the push through the outskirts of big cities is trafficked and rough, but even though this approach was up a big hill, it wasn't too bad.

In the city, we rode on bus-only streets and avoided much of the traffic, finally finding what we were looking for: a big supermarket. Heading soon into the mountains, we would need to stock up on dense, calorie-rich foods, the sorts not found at your typical little mercado. Tam went in while I waited with the bikes, and came back out an hour later laden with huge, heavy bags, and laughing because there was no way we could carry all of it in our bags.  We set to packing while I introduced her to my new friends; waiting outside a supermarket with a loaded touring bike always wins you new friends, and these guys were eager to demonstrate their English language capacity by singing The Doors and Guns 'N Roses.

Bags full and with an extra bag over my shoulder, we headed to the residence of a Warmshowers host we had contacted. To our surprise, the address was a fancy apartment building.  I can only imagine what the security guard must have thought when we asked for Angela. Sure enough, however, we were in the right place, and Angela welcomed us up to her fancy apartment high above the city streets. 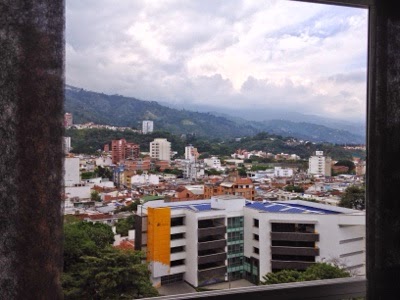 The view from the apartment

Another cyclist showed up the next morning, and the four of us spent the day walking around Bucaramanga and eating delicious food.  In the afternoon, Tam and I took a bus to the mall to find a new phone cord, and were surprised to find three shiny floors of fashion, technology, and lights. 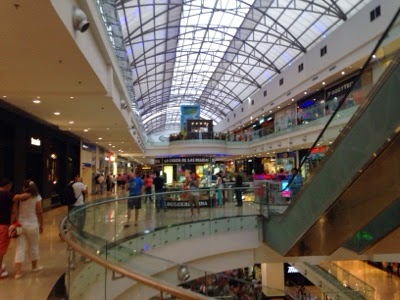 It was nicer than any mall I have seen for a long time, nicer than many malls in the U.S, a big change from what we've seen so far in the rest of the country. 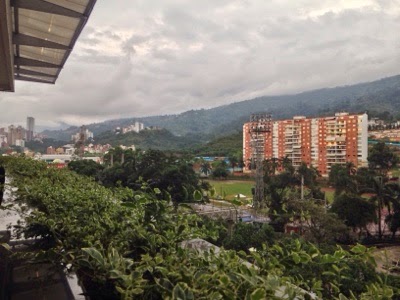 Tomorrow we'll be heading south out of Bucaramanga and east into the mountains toward Parque Nacional El Cocuy.