This morning we slept in and enjoyed a delicious breakfast before heading out into the city with Antonio. Since Antonio works as a private teacher his schedule is flexible and was open today. Thus, we aquired an incredible tour guide without whom I would have felt quite lost.
Thank you again Antonio!
Visiting the centro of Mexico City is not as easy as it might seem. This is mostly because the central area is so big and there is so much to see! We spend almost all day wandering around, learning about and observing the buildings.
Here are some pictures- they'll speak more than my descriptions. 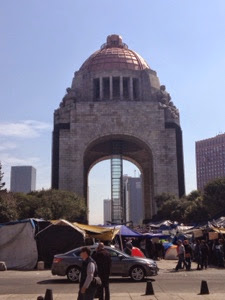 Monumento de la Revolución
This monument stands in the middle of a giant square surrounded by tents. The tents are populated by teachers who are protesting wages and workin conditions. Antonio says there is always someone here, protesting something.
It not for Warm Showers, we could have camped out here!
The glass pillar you can see in the middle is a (pricey) elevator that takes you to the top. 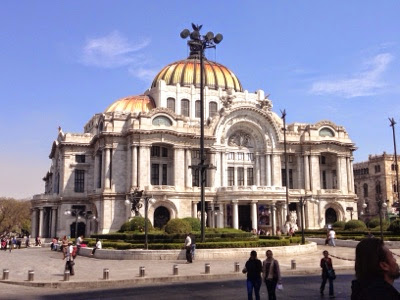 Palacio de Bellas Artes (Fine Arts)
What an amazing building! On first glance the architecture appears European (and of course it was European inspired), but when you look closer, every small detail is related to indigenous gods and important figures in Mexican culture. In particular there is an emphasis on the importance of water. Inside are enormous, beautiful murals. 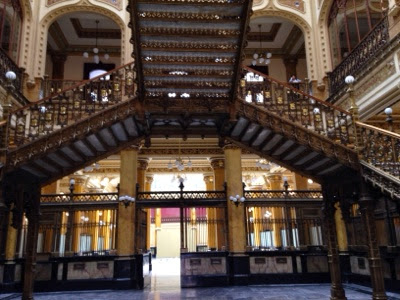 Palacio Postal
This is the home base of the unreliable Mexican mail system. It's a pretty incredible building. Every metal and marble component was shipped from Italy by boat.  It seems to me that they should put less effort into construction and more into actually delivering mail. 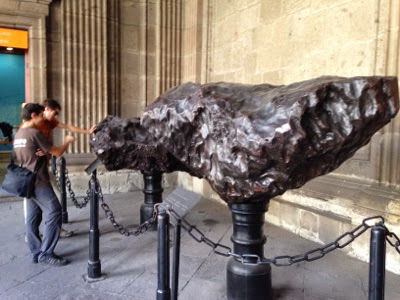 Antonio and Danny admiring a giant meteorite outside the Palacio de Minera. These meteorites were found in various regions of Mexico and this one weighs  upwards of 14 tons! 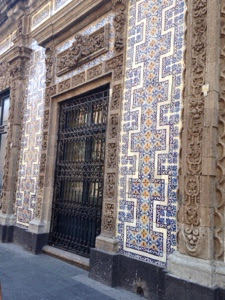 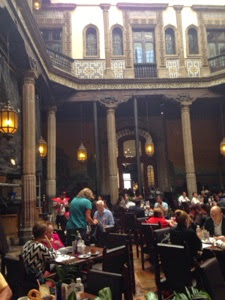 I can't remember the name of this building, but it's wonderfully eclectic, decorated with a combination of Chinese style blue and white porcelain tile, European style columns, and Mexican murals. In the second picture you can kind of see the metal poles which have been installed to support the old foundation. 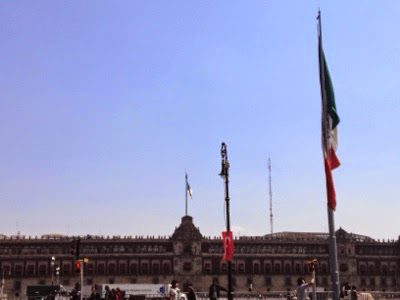 The Palacio Nacional, a government building that houses the offices of the president and the treasury, and the giant flag in the main square. It's one of the biggest central squares in the world. 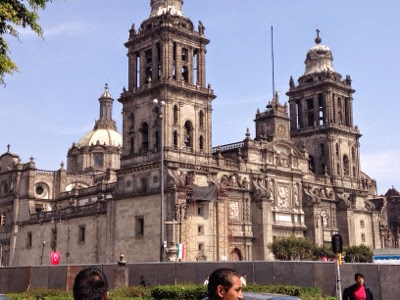 A tremendous cathedral also borders the square (of course). 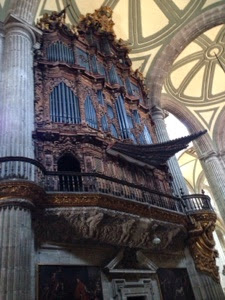 Check out that organ! 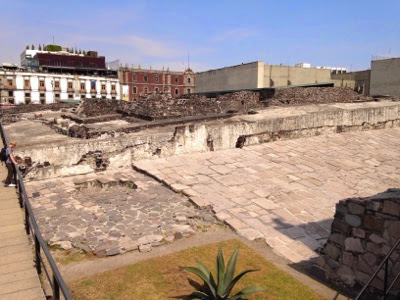 Next to the cathedral are the remains of the Templo Mayor, the original Aztec temple, the ancient beginnings of this city.
Now it doesn't look like much more than some piles of crumbling rocks, but it's pretty neat that there are ruins here, in the middle of this modern city. 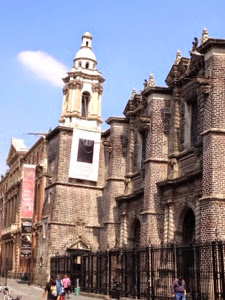 Since Mexio city was built on lakes and a marsh, many of the old buildings (built with huge, heavy rocks) are slowly sinking. Some are sinking evenly, others not so much. Many, like this tower, are leaning significantly.
We end our day by riding an elevator up 39 floors in La Torre Latinoamericana. From here we have an amazing view. Houses and buildings stretch so far in every direction that we can't even see where the city ends! From here, the cars look like toys, the people like ants. We can truly appreciate the grandeur of this place.
-Tamara
Posted by Danny at 8:08 PM