Puebla to Huajuapan: Rest for the Weary

February 14
We stayed last night in Puebla at the studio of a guy on Warmshowers.  It was fine- a place to sleep, no more- but in the morning, the guy didn't show up, and we couldn't leave because we had the only keys and had to give them back to him.  Finally he arrived, an hour late, and we were eager to get on the road.
The road out of Puebla was about as good as it can get when leaving a big city.  Not too much traffic, always some extra room, and then, just outside of the outskirts, the unfinished construction zone gave us a great bike lane!  The views, as well, were great: Popocatépetl, one of the 17,000 foot volcanoes between Mexico City and Puebla, loomed large in our mirrors, its smoking top scraping the clouds. 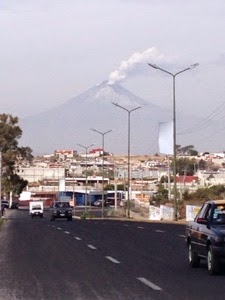 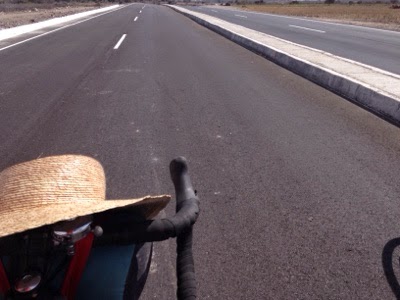 Our wide bike lane, closed to traffic.  That's my sombrero on the handlebars.
After stopping for lunch in a little town's picturesque plaza, a police car approached from the front, sirens blaring.  We expected it to rush past, but instead it appeared to be moving very slowly, and when we passed, we could see that it was the lead car for a little kids' bike race!  The adults were biking alongside; it was possibly the cutest thing I have ever seen. 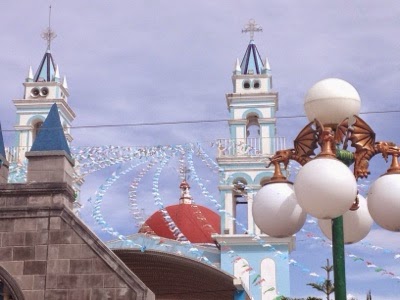 A few more miles and a few more hills brought us to the town of Tepexi, where we are camped in the yard of the town's huge cathedral.  Happy Valentine's Day!  I got Tam a tiny stuffed animal, which she promptly adopted and named peluche (stuffed animal in Spanish).  This brings our entourage to four: Me, Tam, Rex (the dinosaur on the front of my bike), and Peluche. 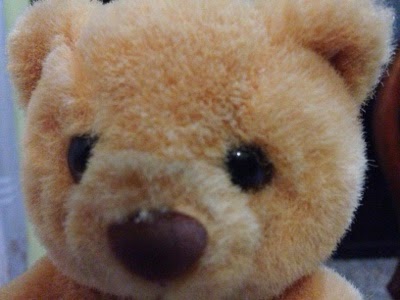 February 15
Before bed, we played a game: what will wake us up tonight?  We guessed bells, since we were in the yard of a church.  But no, it was a techno dance party across the street!  Exciting, but not when you're trying to sleep.
Our morning, predictably, was a bit sluggish but still enjoyable due to their remoteness.  The roads we were on became less and less trafficked as we continued, finally culminating after lunch in a few miles of a remote dirt trail through the mountains.  Riding on dirt required more focus and was somewhat slower, but it was wonderfully therapeutic to be on our own away from the noise of the road. 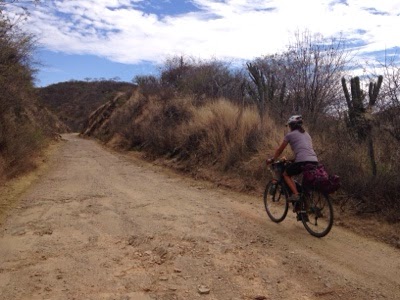 Pulling into the town of Petlalcingo, a few nice people told us that other travelers have camped by the main square in the walkway of the presidencia, the offices of the local government, police, and mail.  The square was quiet, except for a few vendors which we expected would leave around 6.  It was Sunday night; maybe we would get some sleep.  Yet around 7, some girls in uniforms started kicking a ball around the square, then some more came, then a referee showed up, and then, as the game began, all the families of the players showed up, too.  We watched the game, expecting things to die down after.  But then we saw other teams waiting, and when the game ended and the other teams took the field, still more teams showed up.  As well as their families and what seemed like everyone else in the town.  Does anyone in Mexico sleep?  I procured some cotton balls for earplugs, which should help at least minimally. 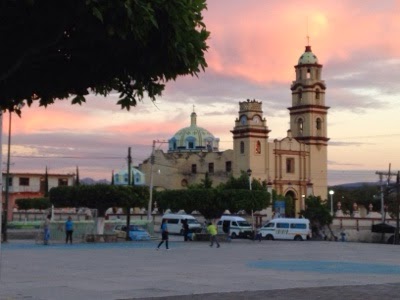 The church and the square of Petlalcingo (before everyone showed up)
February 16
It's almost comical how much noise there was last night.  The earplugs helped, but not that much.  Loud music blaring, a movie turned up too loud, cars driving by holding their horns, people literally yelling, the church bells going every fifteen minutes starting at 3:15, and a guy riding his bike around and ringing a cowbell incessantly.  Then, at 5:56, a song came over the loudspeakers in the plaza.  Why? I don't know.  But at least we answered one question: do Mexicans ever sleep?  The answer, it seems, at least for the village of Petlalcingo, is no.
So our day started out pretty rough, but it quickly went uphill, literally and figuratively, because, as we were climbing, another cyclist going the other direction turned around and rode with us!  His name is Elias, he's from Petlalcingo, and he loves to ride his bike!  Talking with him made the big hill seem a whole lot smaller; he's a genuinely nice guy who's curious about the world, and we enjoyed sharing what little we knew. 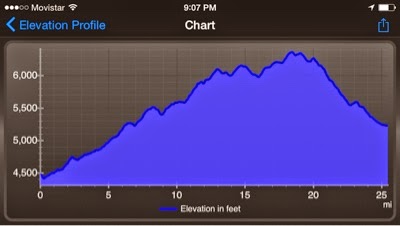 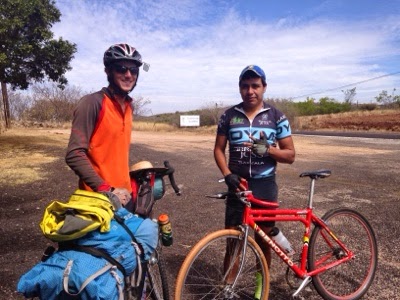 Elias and Me
After reaching the top, Elias turned around, and we entered the state of Oaxaca! 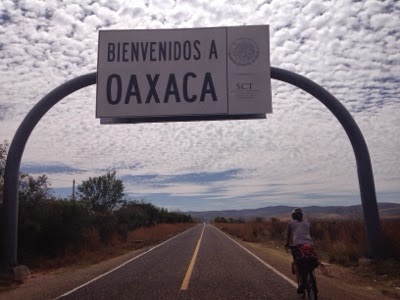 Soon we were flying downhill into a big valley and the town of Huajuapan (wah-who-AH-pahn). 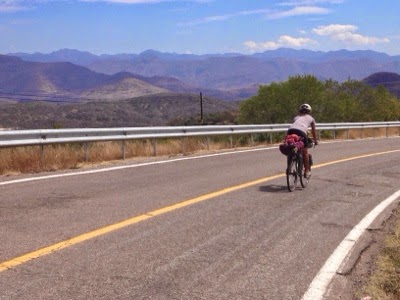 As we entered the town, a van pulled up alongside me and the woman inside leaned out and invited us to stay at their house!  No intros, nothing.   They pulled over when they could, we all introduced ourselves and talked for a bit, then we followed them to their place.  Alicia and Alfonso are their names, and they miss their kids, I think, so they like to have guests!  They've hosted cyclists before and are excited to show us around some of their favorite spots tomorrow.  Turns out it's Alfonso's birthday soon, so we celebrated with a nice dinner. 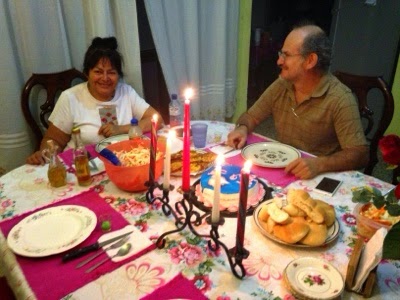 And finally, with four walls around us, do we actually have a chance to get some rest!
Posted by Danny at 7:25 PM