We Like Big Mountains and We Cannot Lie, December 11-14

20 kilometers from our camp spot at the abandoned train station of Laguna Seca, we reach the town of Pocitos. Things at first appear windy and deserted, except for a lady walking by with a young child. She helpfully directs us to the store in town where we find a talkative lady who is extremely excited to have some travelers passing through. Unfortunately she talks super fast and doesn´t enunciate, trait we come to see are quite common among Argentinians in this region. What are you supposed to do when you ask if there’s cheese and you get “cheshkjdshfj dhjshdjh  dshajdhs j”? Personally, I was hoping for “si” or “no.”

In the end, our visit to the town is successful. We get the groceries we need (there was cheese) and enough water to sustain ourselves to the town of Santa Rosa de los Pastos Grandes. We're hoping to arrive later today in preparation for the climb of the mountain Queva! Why, you ask, are we climbing a huge mountain shortly after returning to the bikes and high altitude after a two-week break at sea level? That’s a good question.

Even we are thinking that it's a bit crazy, but we can't pass up the opportunity. The summit lies at over 20,000 feet, which would break our elevation record and is a notable benchmark. The mountain sits relatively close to our current route and is an "easy" climb, meaning that there's a good water source all the way up to base camp and no technical skills are required at this time of the year. We have to at least give it a shot.

The ride to Santa Rosa brings us up and over a small mountain pass, but there's a nice stream that we follow for part of the way and plenty of wildlife. We spot green, parrot-like birds -- really, at this elevation? -- vicuñas, and flamingos. But my favorite part of the day is emerging from the dry, white, and windy salt flat and spotting green grass and bushes! The landscape here is colored by many minerals, but none of them beats the vibrant green of healthy grass. Sometimes, riding out here, I just miss water. 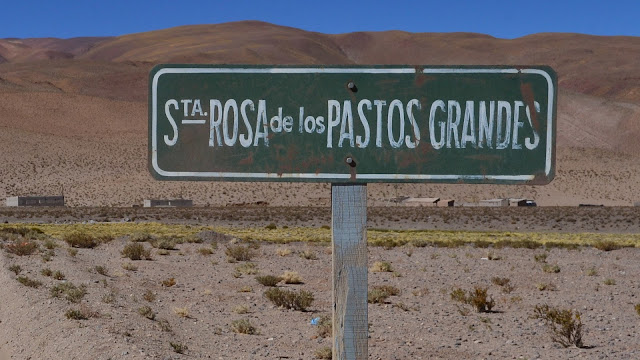 We spend the night in an abandoned building on the outskirts of town, and then head up the mountain early next morning. We can ride 7 kilometers in, and the riding is sandy but beautiful, following the lush stream the whole way. By mid morning we're stashing the bikes behind a boulder and shoving what we'll need for the night and next day´s climb into our small backpacks. Our packs are not made to carry this much stuff and end up just looking comical.

Slowly we begin to climb on foot.  There's no trail, but the route is easy enough to follow. We wind up along the river valley, climbing up beside a waterfall and out into a giant alpine meadow. Along the way we meet wild vicuñas, llamas, and braying donkeys, all out to take advantage of the fertile landscape.


Mid afternoon we reach the first camping area and spend a while simply watching the viscachas. These are hilarious animals that look like a cross between a squirrel and a rabbit. When we first arrive they bound up and away from us, but then they slowly return, their adorable little faces poking out between the rocks to check us out.

Since we have more daylight, we fill up on water and hike to the slightly higher base camp. There's a windbreak here, but it's not facing the direction the wind is currently blowing, and we are blasted all night.

We had originally planned on waking up at five to begin to hike. But when the alarm goes off and it's still dark and super windy outside, I (the one usually up first in the morning) refuse to get out of the tent. We end up leaving around six, just as sunlight is beginning to light up the ridgeline. From our campsite the top of the mountain looked close. Not so. From the top of each ridge we climb, there's another ridge. Near the top, things get steep, and every step we take up, we slide down half a step in the scree. The going is extremely slow, but we drink lots of water and persevere. By the time we near the top, the sun is out enough to warm our cold feet and the frigid wind has actually died down a bit. A final traverse, and we've done it, we made it! Neither of us can quite believe it.


We take a bit of rest on the summit and some time to explore.  Back to the north we can see where we rode into Argentina through Paso Sico, and perhaps way in the distance, is that Uturuncu (a big mountain we climbed in Bolivia)? We can't be sure. Just below the summit are some Inca ruins. Apparently a mummy and some artifacts were found up here! I can only imagine that that mummy must have been a very special person to have been buried up so high.

The summit log is on the slightly lower southern summit, but neither of us has the energy or desire to go climb it. Time to head back to the bikes.


The following morning, neither of us wants to move. We bike back into town around noon and hang out all afternoon with a young local woman named Laura who makes us delicious sandwiches, with lettuce and tomato! She regales us with tales of other explorers who have come to try and climb the mountain, and tells us of her dreams to start a restaurant. If you're ever in Santa Rosa, definitely ask for Laura; she'll fix you up something good to eat, and maybe you'll get to visit her future restaurant!
Also, if you're into llamas, Santa Rosa has a huge, two-day llama festival in March. They're already preparing for it!


Queva: Info on climbing Queva can be found here. We biked in and hiked to base camp in one day, and summitted and came down the next. A nontechnical (but exhausting) walk.
Posted by Tamara at 5:23 PM