After spending way too long playing with some newborn kittens, we set off from La Plata with rested bodies and bellies full of oatmeal, thanks to the kindness of Juan, his mother Neily, and Isabel. 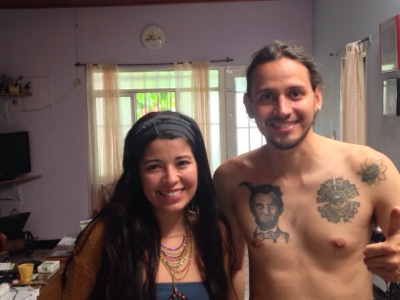 Our road followed the south bank of the Paes River, a frothing, turbulent mass of muddy twists and turns and near-continuous Class IV and V rapids - basically a death sentence for all but an experienced paddler. Watching the torrents below kept us entertained for a while, and the lack of traffic and smooth road surface made for a fantastic morning bike ride. 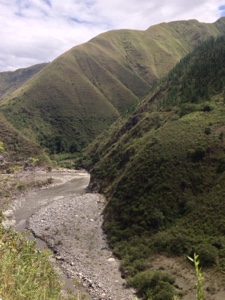 Unfortunately, when we turned away from the river and began to climb, the traffic picked up a bit, mostly dump trucks from all the construction on this road. Every truck would kick up a dense fog of dust as it passed, so we welcomed the impending rain. Fortunately, even with a downpour, the dirt didn't get too muddy, and less dust made for a better ride.

We had no idea of what was to come.

After crossing another raging river and going up and down some hills, we climbed up to the town of Inza. 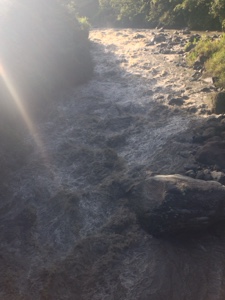 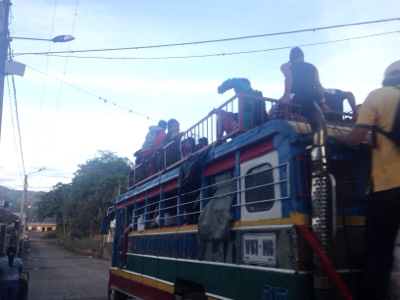 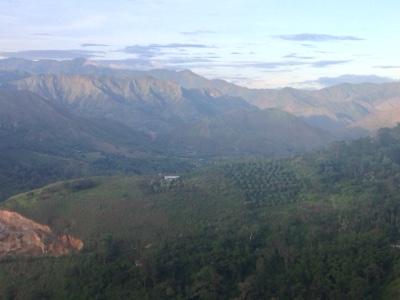 The view from Inza


The friendly security guard at the local school let us camp right out front while the rest of the town watched the soccer match. We're used to people getting excited about soccer--the countrywide camaraderie is incredible--but this was on a whole other scale; apparently Colombia beat Brazil for the first time in 23 years! The locals celebrated, as I might too if I were a Colombian soccer fan, by driving around and honking.

With the assistance of earplugs, we slept well and started climbing again early the next morning. Yesterday's rain, the continuous dampness of winter (in June, yes), and all the construction traffic had turned the road into a slippery, muddy mess. Our wheels stuck in some sections and slid around in others, and each pedal was a challenge, especially where heavy trucks had sunk in and created crisscrossing vertical ridges of mud. Numerous people had told us that there was pavement just a short ways after Inza--unfortunately getting there was even more difficult than tough pedaling or even walking. Here's why: 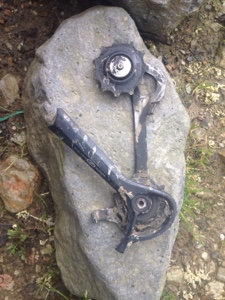 We were making good progress pedaling slowly through the muck when I heard a wrenching sound from Tam's bike. She ground to a halt, her chain having seized up with gritty mud and broken off the derailleur, pulling it into the spokes and bending the part of the frame that the derailleur is attached to, the derailleur hanger, in the process. 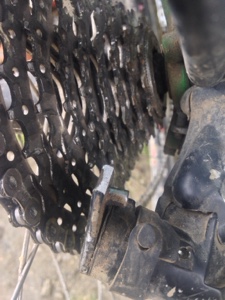 You may recall that this has happened before. A year ago we were slogging through similar mud in northern Alaska when the exact same thing happened to Tam, only she was able to stop before the derailleur broke. With the help of other cyclists and a giant wrench from a truck stop (the only anything for many miles around), we were able to bend everything back into shape and continue riding to Fairbanks, where Tam, expecting the formerly bent derailleur to break at any moment, picked up a new one. But, miraculously, it never broke. It lasted all the way to here, and the new derailleur was still new and in Tam's bag! Even more miraculously, this break happened right in front of a mechanic's shop and a restaurant! Normally there isn't much along this road; these services were set up temporarily to support the construction. We couldn't believe our luck.

With the help of some friendly construction guys, we removed the broken stuff, bent the derailleur hanger back in line (more or less), installed the new derailleur, and ate a warm lunch, all in under an hour! 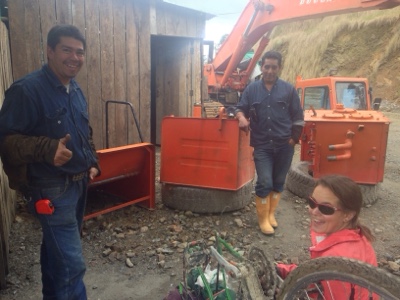 Working on the bike 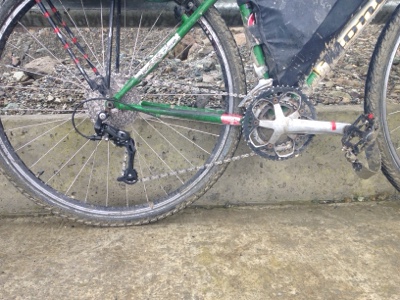 Feeling proud of ourselves, we pedaled onward through more rain, finding the pavement just two kilometers from where we had broken down. From there the going was fast, but now, above 9,000 feet, the cold rain and wind were becoming a challenge by themselves. Tam, I'm sure, was counting the days until she would receive her new rain jacket in Quito, which would surely be more waterproof than her current hoodless windbreaker. 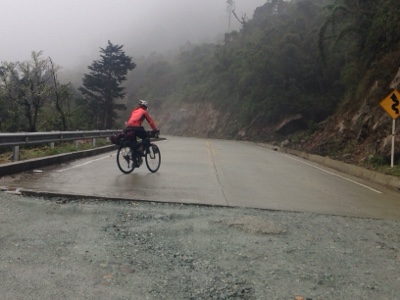 We had to stop and wait awhile at around 10,000 feet for a landslide to be cleared, and upon starting again were just kind of fed up with the cold wind and rain. We were fully in the clouds, no sign of a break in the weather, so upon finding a small restaurant, we stopped. Inside we found laughter, warmth, and the most delicious hot chocolate and buñuelos in the world (a buñuelo is a fried ball of corn flour and cheese). The happy folks inside, Lucila, Wilson, and Natalie, took good care of us, and when I asked if we could camp outside, Lucila looked shocked; she had already prepared a bed with about fifteen blankets! We played some music then drifted off, listening to the wind howl outside. 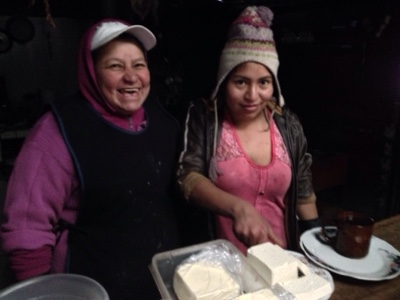 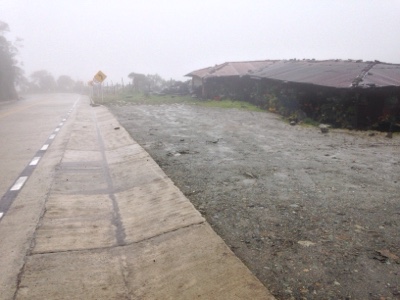 Restaurante La Cascada, an unassuming little outpost, is worth a long stop if you're in the area!

The next morning we said adios to our new friends and continued up to the top of the pass. There were no fences next to the road at the top, no farmland, just high elevation páramo, a marshy ecosystem similar to moors. 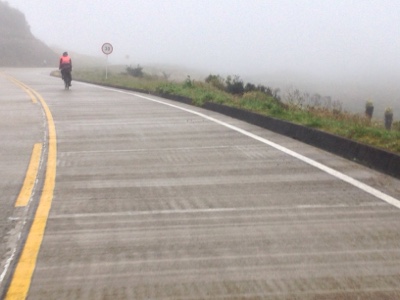 Frailejones hiding in the mist

We soon descended again into the land of cows, climbing up another small pass before finally dropping way down towards Popayan. Stopping for lunch in Totoro, we started talking with the people in the restaurant and soon were telling about our exotic North America and learning the local indigenous language, which was apparently the first in South America, according to one guy. We ended up chatting for hours. 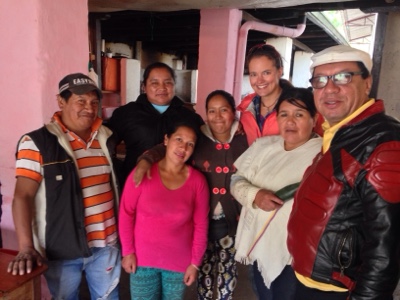 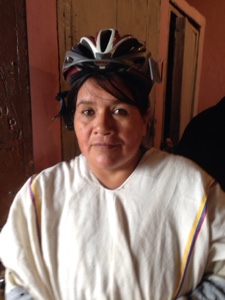 Ema tried my helmet on for size

Back on the road, the descent to Popayan took no time at all and we found ourselves soon at the home of Ronald, whom we had contacted through Warmshowers. Maybe the nicest person ever (tied with all the people we have met over the past few days), Ronald welcomed us in. Tam hasn't been feeling well, so we are staying the next day as well at his place in Popayan. 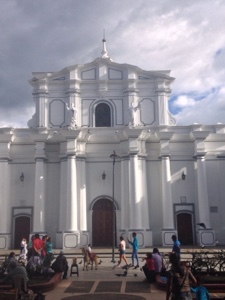 Route notes:
- Paved from La Plata for a number of kilometers, then decent dirt to Inza. Construction trucks but little other traffic. After Inza, rutted and deep mud for a bit, tough but mostly rideable with medium to thick tires, motivation, and okay conditions. Paved about 10km after Inza, some bumpy dirt again near the top of the pass, paved on the first downhill, bumpy dirt again on the next big uphill, then paved to Popayan.