How To Turn A Road Bike Into A Mountain Bike, July 7-13

With the highest peaks and passes of the Andes looming ahead, Tam and I have been talking about making our bikes more mountain-friendly. They are road bikes by nature, and though this reality has not dissuaded us from riding remote dirt roads and tracks, it certainly has made it more difficult, tiring, and unsafe, what with our high-pressure tires and impotent road brakes. South of here, we want to be in the mountains far from traffic and, most of the time, pavement. So, with a lot of thought as to what might be our best option, we decided to transfer all of our components over to mountain frames. See the full reasoning and explanation for this at the end of the post.

The day after returning from the Galapagos, we set up our bikes and, instead of riding out of Quito, set out to find a well-stocked bike shop with a good mechanic. In our past experience in Latin America, this hasn't been so simple, but we figured that a good place to start looking would be a place called Construbicis. The owner, Carlos Tacuri, designs his own proprietary brand of frames and also used to run a casa de ciclista, so we knew he would know a lot about bikes as well as the specific needs and parts for touring bicycles, something knowledgeable mechanics often have little experience with. (A casa de ciclista, literally translated as "home of the cyclist," is exactly what it sounds like: a home for cyclists who are on the road. These casas can be found in almost every major city in Latin America.) 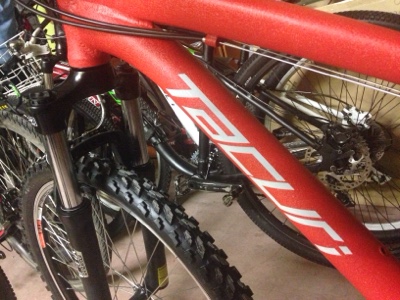 It turns out that we headed to exactly the right place. Carlos listened to our thoughts and ideas, contributed some of his own, drew up a price quote, and then offered to let us use his shop and, when needed, his labor, free of charge. We couldn't have asked for a better deal, not to mention an invaluable learning opportunity!

It would take a few days for the necessary bike parts to arrive, so we decided to spend some time in Mindo, a little town just west of Quito that's known for its high density of bird species. Pope Francis happened to be visiting that day, so while hordes of people flocked to the city, we took a bus to the country. We had had our Pope experience the day before when we rode down a closed street and saw a line of people miles long, huddled under hours of driving rain, not even to see the Pope but for the chance to camp overnight close to where he would be speaking the next day. Along the line were countless vendors selling Pope shirts, Pope figurines, Pope flags, and anything else you could possibly want that's Pope-related. 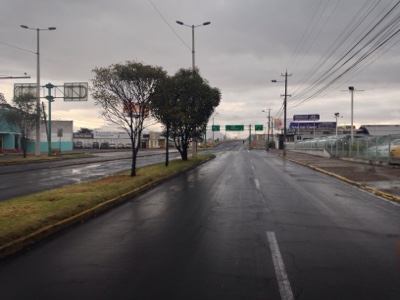 Closed to cars, open to bikes!

Mindo has tons of tourism infrastructure: ziplining, Wi-Fi, tours, signs in English, but when we got there, we dropped our stuff at a hostel and simply went out for a walk. There is a little-trafficked road leading to some waterfalls just southeast of the town, and we spent our afternoon walking along and enjoying the sights, sounds, and smells of the cloud forest. The dense surroundings made birding rather difficult, especially coming from the Galapagos where birds casually walk up to you, but we managed to see seventeen new species! The next morning we took another walk and saw a few more, but the highlight was after, when we visited a "bird garden." We expected tranquility and peace, but this garden was full of activity. Really it was utter madness. Countless hummingbirds were zooming around faster than we could follow, and many more tanagers, bananaquits, and thrushes were feasting on overripe bananas set out on nearby tree limbs. We ended up counting almost fifteen species present, about half of which were new to us, all chirping and flying around in pandemonium. 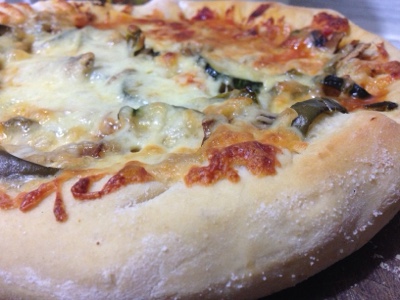 We don't have any pictures from Mindo, but we do have one of this delicious pizza we made the day after.

Finding ourselves back in Quito, we set out the next morning for the bike shop. Carlos told us to disassemble everything, and we did what we could until he and one of the mechanics, Ivan, showed us things we didn't even know were there, let alone that you could remove! All of that, including cleaning, took about a whole day. 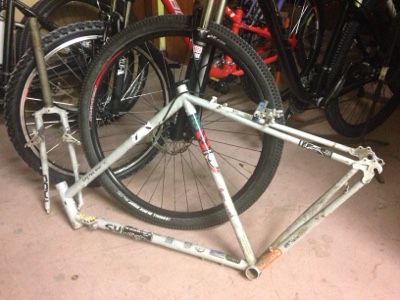 My former bike frame and fork

Putting things together over the next two days was even more fun. Under Carlos' expert tutelage, we assembled our wheels, bottom brackets, headsets, racks, handlebars, and brakes, and hooked everything together until, finally, we had what looked kind of like a bicycle! As of this writing, we still need to fine-tune a few things and fix a few more issues, but it's looking like we'll be riding mountain bikes out of Quito! 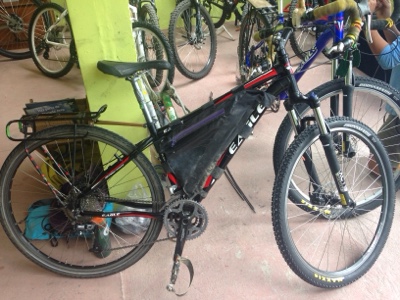 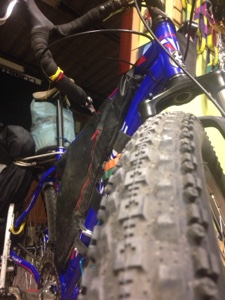 We could not have done this without the team at Construbicis. Carlos is extremely knowledgeable about even the tiniest bike minutiae, and though he is insanely busy (two toddlers tend to have that effect), he will find the time to help you. What's more, he told us that what he's doing for us is not really out of the ordinary. His philosophy is to teach, and this infuses his shop's policy. When customers come to see him for little things like fixing a flat tire, for example, he refuses to allow them to leave the bike and pay a few bucks. Instead, he teaches them how to do it, sometimes for free. We saw this in action when a guy came into the shop asking about brake pads. Instead of doing it himself, something that would have taken just a few minutes, Carlos taught the customer how to change them, charging only $3 for the brake pads and nothing for his twenty minutes of time. 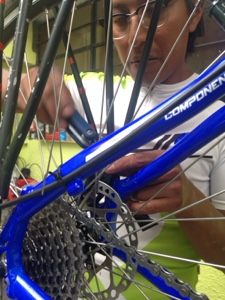 If you can't already tell, Carlos Tacuri is not your ordinary bike mechanic. We have been so fortunate to be able to learn from him, and you can too! His shop is at Mañosca and Dionisio Braes in Quito, about a kilometer west of Parque La Carolina. He's also on facebook.

The bike specifics are technical and not so accessible, so that's why they're down here instead of in the narrative above. Yet I feel they're relevant, especially for those of you who are gasping at how I could give up my top-of-the-line Surly for a cheap aluminum frame (Eagle brand, yeah!).
The two main things we felt we needed on an off-road bike were: 1) disc brakes, for better stopping power and to minimize rim wear in nasty conditions, and 2) wider tires, at least on the front wheel. Ideally we would get fat bikes, but that's not realistic here and now.
So far on our tour, I have been riding a 700c Surly Long Haul Trucker. My brakes have been virtually maintenance-free, and stopping power and rim wear wasn't too big of a deal until we started going off-road. Then, on huge descents and in the rain, the brakes did very little to stop me but a lot to erode my rims.
The fork and chainstays can accommodate a maximum tire width of 45mm (1.7"), not really wide enough for real off-road touring. Surly's 26" Disc Trucker has disc brakes and can accommodate wide tires, but I didn't buy that version; it would have been the wrong choice when anticipating a road tour and wanting to have interchangeable wheel components with Tam's bike. Although Tam's 700c Kona Sutra has disc brake mounts, the frame can only accommodate a tire width of 40mm (1.6"), which is what we have now.

One solution we considered was to keep the current frame while 1) changing both of our forks to accommodate wider tires, and 2) procuring a disc brake conversion kit for my bike to have disc brakes on the back. This ultimately would have been much more expensive, with imports taxed heavily in Ecuador, and it would have been a terribly imperfect fix with only one disc brake (on my bike) and one wide tire. Additionally, because our forks are really short as mountain forks go (390mm for me, 440mm for Tam), changing them would have really screwed up the frame geometry and riding posture (if our frames could even accommodate a suspension fork; finding a wide, rigid fork would have proved very difficult).

Thus, after spending a lot of time evaluating pros and cons of different options, we decided that the best solution in terms of cost, ease, and effectiveness was to find mountain frames that would accommodate our components. Fortunately we had Carlos to help us out, but we still hit some snags along the way. Many snags, in fact. If you're interested in all the minute details, read on!
1) Disassembly: A lot of parts had rusted on to our old bikes. Tam's bike especially proved very hard to disassemble. There was a lot of WD-40 and banging with mallets involved.
2) Racks: Installing my Blackburn EX-1 rack was a whole tree worth of snags. It was not made for disc brakes, so I carefully bent it in a few places to widen it enough to clear the brakes. There were no long screws with the correct thread size and length for either side of the rack, so I creatively used spacers and cut screws to size. The left rack leg interfered with the quick release, so I ground it down. Finally, the frame didn't come with rack mounts, so we affixed the rack arms to the seat post quick release screw, which was too short with the arms attached, so we found a longer screw and an according nut. 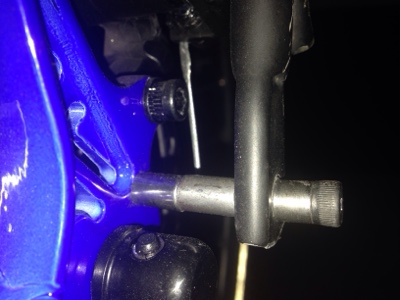 3) Derailers: Our front derailers are bottom-pull, but the frames were designed to accommodate top-pull derailers. We solved this problem by adding a hollow screw under the frame and running housing attached with zip-ties all the way to this screw. There is a small loop of housing protruding under the bottom bracket, but not far enough that there's a good chance of damage from large rocks. 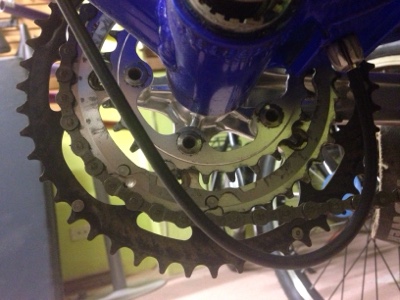 4) Brakes: Our brake levers, with the weird exception of one of Tam's, are short-pull levers, meaning that they don't pull enough cable to operate disc brakes well. It's possible, but not optimal. We weren't able to find the right levers here in Quito, so we'll just make do for now with what we have.
5) Cables: The cables running under the top tube rubbed against Tam's frame bags, so we simply covered the open cables under the top tube with housing on both of our bikes. I was unable to feed the new brake cables through the brake levers, so I took off the levers, fed the cables through, then put the levers back on, replacing the handlebar tape and the housing inside in the process.
6) Bags: My frame bag, designed specifically for my previous frame, didn't even come close to fitting the new frame. We took it to a sports uniform store, and the owner, a friend of Carlos, worked some magic. Now it fits! Even with all of these challenges, between all that we have learned and the fact that it will come out costing close to nothing after the sale of our old frames, this switch has been overwhelmingly positive. It's also really nice to be riding bikes that we built, not only because it's handy when things break, but because it's just tremendously satisfying. We're not sure how these bikes are going to hold up, but we're excited to give them a try!
Posted by Danny at 10:20 AM