Excited to leave Bucaramanga and reach higher climes, we packed up quickly, thanked Angela for her hospitality, and hit the road.  Getting out of the city was even better than getting in a few days before, the good roads evidenced by all the cyclists out and about.  After a nice descent and a climb, Tam got a flat tire, and while changing it she realized that the nut on the quick release lever had rusted to the skewer (basically we could only loosen the wheel a little bit).  Luckily we were still able to remove the wheel and fix the tire, so we were able to continue.  In our limited bike experience, we weren't sure if this was a big problem, necessitating our turning around, or not.  Settling on "not," we pedaled to Los Curos, where we turned off our trafficked road and into cycling paradise: hello, mountains!  The distance between Los Curos and Malaga is about 35 km as the crow flies, jut a few hours' ride on flat pavement.  The road connecting the two, as we would soon see, is about 120 km and takes eight hours by bus.  It would take us days. 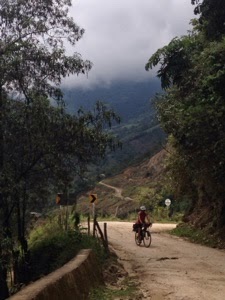 Up and up we went on our quiet road, the air feeling fresher and the views looking better with every pedal.  The road was cut straight into the mountainside, the smooth pavement fading into dirt after about 10 km of climbing. 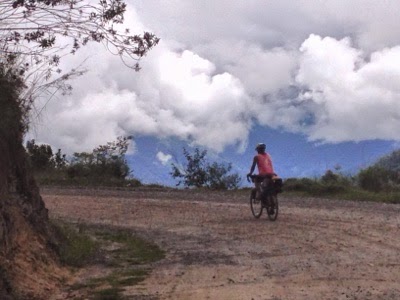 Construction crews are attempting to pave the entire distance but so far have only done the parts that would be most susceptible to landslides.  Every so often, we would round a corner, excitedly see a sign announcing the beginning of pavement, ride for a short while then hit dirt again.  Having expected all dirt, we were excited to get any pavement at all. 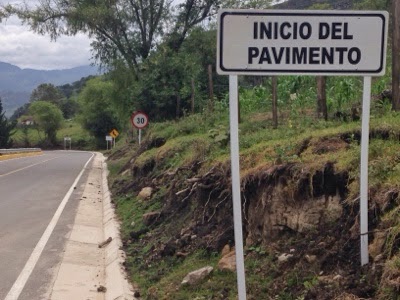 About 100 meters beyond this "INICIO" sign, that tiny white spot on the left of the picture announces "FIN DEL PAVIMENTO"

Reaching the first pass around 2,200 meters (7,000 feet), we decided to camp rather than descend back to the heat and another big climb.  Finding a spot proved tough, as there was little flat land anywhere and most of it was owned by the construction company.  An eager local kid showed me around, and we finally set up above what I can only presume to be a water tank.

Though it rained all night, the road surface stayed solid, and we descended to the tiny town of El Tope then began to climb right back up. 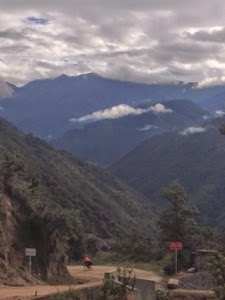 Tam rounding a corner on the descent

The path was built to circumnavigate the Cañón del Chicamocha, a deep cut in the earth that we wound around, now finding ourselves on the opposite wall, yesterday's path clearly visible on our right.  Even cooler air and better views greeted us as we ascended, ample rewards for constant focus to avoid rocks and the inevitable pain and soreness in our legs.  Clouds built up around us throughout the morning, always managing to shroud the peaks but not us, adding another wonderful element to the expansive landscape. 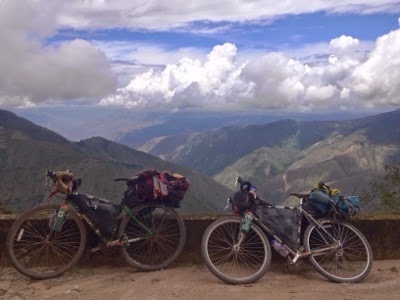 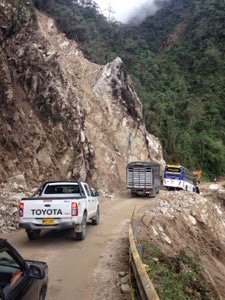 Construction crews were clearing this landslide before they sent us through and the bus got stuck. In One River, a book I read recently, author Wade Davis tells of his four day wait for crews to clear a landslide on a similar road in Colombia.  We only had to wait about thirty minutes.

After a seemingly never ending climb, we topped out at about 3,000 meters, just under 10,000 feet.  A new valley spread before us, our view reaching the floor a vertical mile below and the impressive peaks around, the highest still a vertical mile above.  We immediately began our descent down into the valley and its towns of Guaca and San Andres. 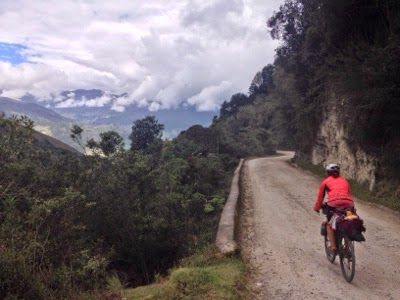 To reach the bottom took us hours; we stopped numerous times to let our hands uncramp and rims cool, finally crossing the river at the bottom.  Around 5, happy to stop the bumping for the day on this trocha of a road, we set up camp in a family's backyard.  As has happened before, we had to wait for the permission of the señor before getting permission.  I am so happy that traditional gender roles are not the norm everywhere.

By 5 am, around first light, people at the house were up and about, and I woke up fully feeling the effects of not resting with an impending cold.  But out we went anyway, stuffy nose and all, hoping to at least reach the top of the next pass before calling it a day.  Things didn't start out auspiciously: about five minutes in, one of the bungee cords holding my ukulele managed to lodge itself between the rear spokes and the cassette, creating a seemingly impossible problem. 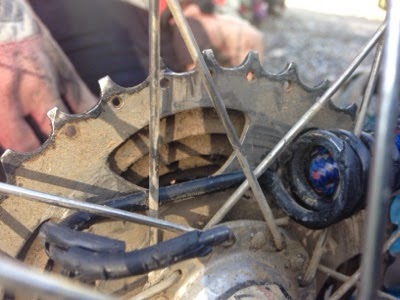 I have no idea how it got like this.  The wheel and dérailleur didn't seem to be damaged, so we set about removing it, and finally pulled it free with a lot of finagling.  No harm done, phew!

The ascent was steeper than that of the day before, the road bumpier and tougher to ride on.  Nothing more of note happened, except that we collected our first observation as volunteers for Adventurers and Scientists for Conservation (ASC)!  The organization seeks to gain scientific data from the hard-to-reach places that thrill-seekers visit.  We'll be submitting information on the roadkill we see. 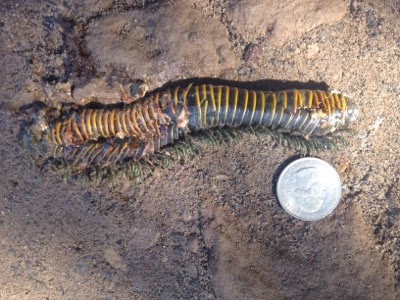 Around mid-afternoon, feeling feverish and tired of all the steep, rocky uphill, we set up camp around 2,800 meters, or 9,000 feet, in a cow pasture with one of the most gorgeous views, well, anywhere. 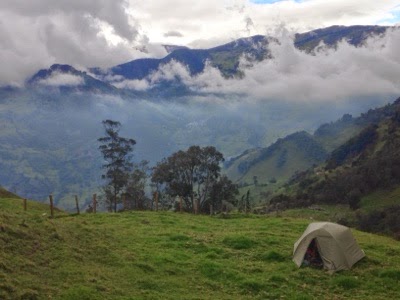 Sleeping in a cool, quiet place must have been therapeutic, because I woke up feeling much better than I did the night before.  We completed the pass, descended a bit, then climbed back up to over 3,000 meters, about 10,100 feet. From the top we could see the next valley, the towns of Malaga and Miranda filled with dollhouses and connected by a tiny ribbon of road.  Starting the descent, the air was invigoratingly crisp, and as we flew downhill, the wind whipping by us, we could feel it warming up.  The jutting promontories of the valley, no more than tiny topographic bumps when seen from above, suddenly loomed above us, as much in the sky as we had been moments before. 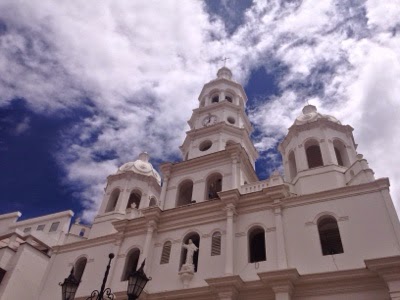 Malaga's dollhouse church is a lot bigger when you're standing in front of it.

After an hour of descending, it was hard to believe we could go down much more before reaching the ocean, but still down, down, down, the air now hot, cacti all around, striated cliffs bare in the sunshine rather than covered with a lush blanket of obscuring greenery as they had been before.  At the bottom was the Chicamocha River, which we followed downstream, down, down, still down, an hour turning to three or four until we turned at a confluence in the river and started following the new river upstream, trying to remember how to turn our stiff legs.

We stayed at a little hospedaje in Capitanejo then, the next morning, pointed our wheels towards the snowcapped peaks of El Cocuy.  The road continued to follow the river and immediately redefined the worst road we had ever biked. 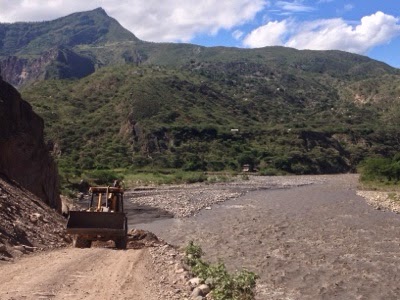 I wouldn't be surprised if this bulldozer ends up in the water later.

It was a lot like technical mountain biking at times, rocky and steep and slippery in parts but certainly rewarding with no traffic, just us and the road and the river surrounded by an odd mix of ferns, bromeliads, mango trees, and cacti.  We met the swift Nevado River and began following it upstream, its canyon's walls narrowing as we ascended and the road surface improving marginally once we escaped the sandy, lowland desert. 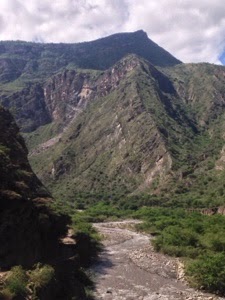 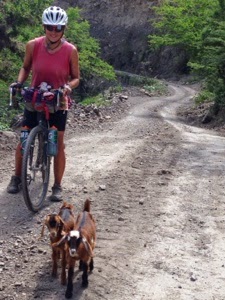 The only traffic: baby goats

A few hours of climbing got us to the town of El Espino, where we set up camp in a field.  By now, after pushing herself hard physically and mentally for the past few days, Tam had caught my cold, so she went to sleep early while I played some ukulele, watching the mountains and then the stars through the mesh of our tent. 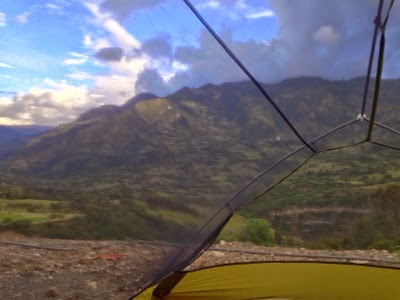 An early morning and some more climbing took us to El Cocuy, the doorstep to the nearby national park of the same name.  We'll be spending the next few days in and around the park, biking and backpacking, of course. 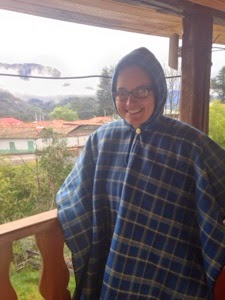 To make sure she would be warm enough (and stylish enough too, of course), Tam bought this fleece ruana, the centuries-old precursor to the Snuggie.  Everyone here wears them, and you can too!  Here's how: find a blanket, cut a hole in it, and put your head through the hole. Voila, ruana!